From Scotland to a new life in the French Alps 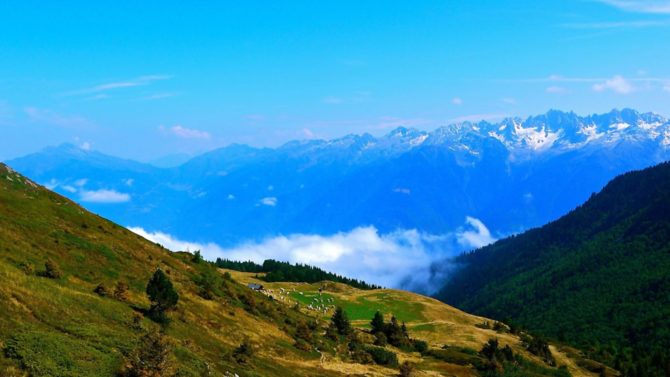 A life-changing event inspired Sarah Dougall to follow her dreams of learning a new language and becoming a better skier, both of which she has fulfilled with a move to Auvergne-Rhône-Alpes

I started an internet business in the late 1990s, using my legal background to sell customised legal documents online, but it went belly-up.com after two years and I had to sell my flat because I could no longer afford to pay the mortgage.

I didn’t know what to do with my life, but after reading The Alchemist by Paulo Coelho, it inspired me to make a wish list and the two things that came out on top were to learn to speak a foreign language fluently and become a good skier.

That same night I went online and applied for chalet jobs in ski resorts in Europe and four days later I was working in the kitchen in a chalet in Courchevel.

What attracted you to Savoie?

I think it was fate. I’ve had a love affair with France ever since watching Belle et Sébastien as a child (the TV show about a six-year-old boy and his wild mountain dog living in the French Alps).

After my season in Courchevel I knew I wanted to stay in France in the mountains and I ended up here in the Maurienne Valley where I met my partner, Sébastien.

Did you find it easy to find a suitable property?

Funnily enough, the listing for the property I eventually bought (‘ancien moulin’ it was described as in the estate agent’s magazine) sat on my kitchen table in my apartment in Courchevel all season and I didn’t even glance at it because the photo was so bad (it looked like the inside of a barn taken at night!).

But after looking at several other properties (and having two offers rejected) I returned to the shadowy ‘moulin’ and when I finally realised it meant ‘watermill’ I was completely sold before I’d even seen it.

Did you have to do much work to it?

Apart from the original external stone walls, everything else has been replaced in both the watermill and the old workshop which is now the gîte.

How long have you lived there now?

I have been here for 16 years.

When did you train at the Le Cordon Bleu Cookery School?

In 2010, on a trip back to Edinburgh, I bumped into an old friend and fellow foodie in Waverley station who gave me a book he’d just finished reading on the train about Le Cordon Bleu in Paris. I read it and immediately decided I had to go.

What do you most enjoy about living in Saint-Alban-d’Hurtières?

When I lived in Paris during my course at Le Cordon Bleu, I came back to Saint-Alban a couple of times on the train. When you get near Chambéry you start to see the mountains in the distance and the further you go the bigger they become until you’re engulfed by them. That’s when my heart would soar and I knew I was home.

I’ve been all over France and Savoie is by far the most beautiful department (and also the one with the most hours of sunshine per year apparently). I’ve also met some wonderful people.

Living in the mountains, the seasons are very pronounced. In spring/summer, everything is vibrant green, carpeted in the most amazing spectacle of wild flowers.

In autumn the hills turn red, orange and yellow – and then pure white in winter. What I especially like is when the sun sets on a clear winter’s day and the tops of the mountains glow pink, like the frosting on a cake.

Is there any aspect of living in Savoie that surprised you?

If you go round to someone’s house in the morning, you’re offered white wine, not tea or coffee, which is nice. Also, how similar to Scotland a lot of the landscape is.

Have you always wanted to run a B&B?

I wanted to have a food-related business for a long time. I wrote a business plan for a vegetarian restaurant back in the 80s but that was side-tracked when I became a solicitor.

When I started my business here it started off as a B&B but now it’s predominately self-catering and I do evening meals on request. My next step is to start cookery courses and a pop-up restaurant.

What is a typical meal you might cook for your guests?

I love cooking with ingredients that I’ve either grown myself or foraged for, or which hunter friends have given me.

All rounded off with my home-made liquors.

There’s a good outdoor market in Saint-Jean-de-Maurienne on a Saturday morning. But the best indoor market is Les Halles Savoyardes in Albertville. The variety and quality of fresh fruit and veg is a cook’s dream.

Can you recommend a good restaurant near Le Petit Nid?

When I first started coming to France 30 years ago, it was practically impossible to eat badly. Now, sadly, I find the opposite is true.

Those unpretentious little inns where you could eat an amazing home-cooked meal for 10 francs are now all but lost. But there are two good restaurants nearby which have my cooking philosophy. Ferme Ambrune et Polalye here in the village, the menu showcases duck (it’s a duck farm) and puddings are based around home-grown red fruit. Le Chaudron in Montsapey, on the other side of the valley, uses locally sourced ingredients and everything is made in the restaurant kitchen, including the bread.

What advice would you give to expats thinking of moving to Savoie?

Get to know the local people. Go to the local fêtes. Invite your neighbours round for drinks or a meal. Don’t get stuck in an expat crowd because you will miss out on what it’s really like to live here.

The hills are alive! Fun on two and four wheels on a long weekend in La Plagne

“I won the lottery without buying a ticket!” My dream home in a national park