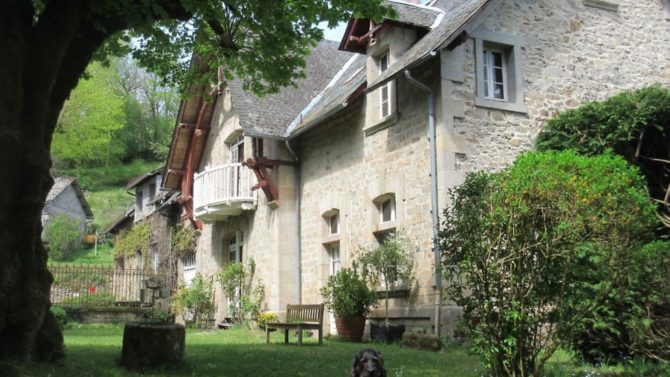 Sharon North (59) and husband Andrew (57) moved to Corrèze, Nouvelle Aquitaine in December 2017 with their labradoodle Mortimer and are now renovating their house, formerly a notaire’s home and office, with a view to opening a small chambre d’hôtes and gîte. The couple had both had separate dreams. Andrew’s dream to go sailing was realised in 2004 when they spent three years cruising the US east coast and the Caribbean in a 44-foot sailboat. When they returned, it was time to start thinking about Sharon’s dream of living in France. They undertook a renovation project in the UK that built funds for the move and helped prepare them for the work they are now undergoing in their French home.

Why did you choose to buy a house in Corrèze?

Corrèze found us! We were originally looking in the Lot valley but just couldn’t find anything that worked for us (online anyway). We wanted a village location, a house for the chambre d’hôtes and a separate one for a gîte. Good internet access was essential, a village that had shops and services, transport links and a house that we both loved. And in budget. One Thursday I stumbled across a house in Corrèze (the village of the same name as the department it’s in) and managed to find it on Google maps. It appealed to both of us, so much so that I telephoned the estate agent. She said it was proving popular and had a couple of viewings that weekend. Our house was on the market at that time but not sold. By Monday we were under offer and I phoned the agent back again who said they had another viewing booked on Wednesday. On Thursday morning I phoned again, no the viewers hadn’t been interested. At this point I really quizzed the agent – so many viewings but no sale? Apparently, it was the layout putting people off, but not us. By that afternoon we had arranged a dog sitter for Mortimer, found a hotel and booked the Eurotunnel for 4am the following morning. We spent a total of five hours at the property over two days and our offer was accepted as we drove back to the UK. We did everything we were told not to do when buying a house in France, saw just one house, in summer and in an area we did not know!

Now that you are in Corrèze, what do you like about it?

We both enjoy walking Mortimer and being just inside the Millevaches Regional Park we have some great places to visit. Cooking is also a great passion for both of us and a way to relax. As well as super local markets, the one at Brive la Gaillarde is in the top 20 French markets so you can often find us there on a Saturday morning. I used to sell antiques and vintage items and it’s really hard to stop seeking out a bargain so I love vide-greniers and Emmaüs, I think there will be divorce if I bring another chair home! Beaulieu-sur-Dordogne has to be up there as a favourite place to visit. It’s a beautiful town, great restaurants and a fabulous spot on the Corrèze section of the Dordogne river.

What do you know about the history of your house?

The house has been owned by the same family for many generations, in fact they still have a house in the medieval heart of Corrèze village. Originally it was a one up, one down guardian’s house attached to stables for the hunting horses and the barn was for a few cattle. Our neighbour lives in a house that was once the pigsty. Situated on the edge of the village it was basically a home farm. At some point early in the 20th-century Madame decided she wanted to move from the medieval house as there was no garden and so a big reconstruction was undertaken. The stables became four offices for the notaire and upstairs a three-bedroom apartment was constructed, with sitting room and oversized fireplace plus a miniscule kitchen. Apart from electricity and central heating arriving in the 1950’s the house has hardly been changed.

Can you tell me a bit about your renovation plans?

Phase one was turning the attached barn into a two-bedroom holiday let. We’ve done nearly all the work ourselves and it was finished last autumn. We designed it ‘upside down’ so the downstairs bedrooms remain cool in the summer and the living space takes advantage of the glorious views. We moved in last autumn so we could start work on the main house. We’re creating three guestrooms with bathrooms and a separate suite for us. Because of the original layout there’s been a lot of changes. For example, one bedroom has been created from the old kitchen, toilet and corridor.

What is your favourite thing about life in France?

Slow living, definitely. That doesn’t mean not working hard, we do – The renovation is all encompassing! If we’re not physically working then we’re planning, researching and ordering – but France almost makes you slow down. Most shops close on a Sunday and quite often Monday too, not forgetting two hours at lunchtime. Just doing the walk to the boulangerie means stopping to have a chat with friends. With great produce available taking time to prepare a meal is not a chore, I can’t remember the last time I had ‘fast food’ – Thursday night pizza from the van parked in the village square is an exception of course!

Has anything surprised you since the move?

The generosity, support and friendliness of people. Our one major concern about moving to France was being socially isolated, particularly not being fluent in French, but people could not have been more welcoming, going out of their way to make us feel part of life here. Not just villagers but also in the various government departments we have been in contact with.

How has lockdown been for you?

It really hasn’t been too bad. It reinforced that our decision to live in a village with facilities was the right one. We’ve only needed the car once a fortnight as everything is in walking distance and it meant we still saw people. Not shaking hands and ‘bisouing’ is still quite hard though. And no pizza van!

My life as an haute couture embroiderer in Paris

Sea of dreams: Living in La Rochelle by the Île de Ré

Previous Article Fantastic fungi and small but mighty museums: 7 things we learned about France in the August 2020 issue of FRANCE Magazine
Next Article Renovating a French château – what do you need to know?