Renovating a farmhouse in Languedoc-Roussillon 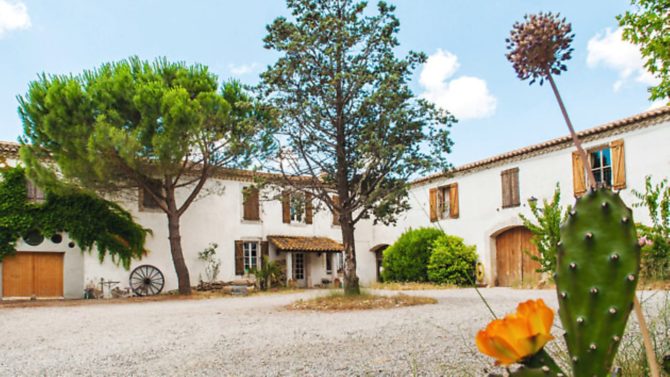 British expats Honor and Simon Marks transformed a run-down farmhouse in Languedoc-Roussillon into a stylish home and a successful gîte business. Find out more about their renovation

When Honor and Simon Marks moved to France in 2007 with their daughter Holly, then aged four, they swapped life in Battersea for a rental while they looked for a renovation project – though it didn’t take them long to find their dream home in Ferrals-les-Corbières in Languedoc-Roussillon.

“We had four months on our contract before we had to move out, and so we hunted day and night for our ideal property,” says 50-year-old Honor, who had worked as an IT recruitment consultant. “Within weeks we found an old, forgotten and unloved farmhouse with barns and unkempt gardens, dead birds and old posters all over the walls. It was a mess, but we could see through that.”

With a tight budget, 45-year-old builder and carpenter Simon did most of the renovation himself. Though his work had seen him carry out renovation projects for clients, it was the first time he and Honor had taken on a complete renovation for themselves. “We lived with the house as it was,” he says, “and concentrated on renovating the barns into gîtes.”

“Although the house was in a state, and never felt clean despite my bleaching everything, the gîtes were our priority. It always felt like we were camping though!” admits Honor.

For Simon, carrying out extensive renovations was far from easy. “We’ve saved €100,000s because Simon did the work himself, but it was the only choice we had,” explains Honor.

“Things are different here – building techniques and materials. We brought our kitchen and bathroom furniture over from the UK because it was cheaper. It was a big risk, but luckily we managed to get it right.”

The couple also saved money by sourcing furnishings from vide-grenier attic sales. “We’ve certainly learnt to be resourceful,” says Honor. “And the house is only just finished now.”

Luckily for the couple, the gîtes have proved popular. “We finished the first gîte in March 2009 and the second in July the same year,” says Honor. “The first one was only really complete about 15 minutes before the first guests arrived!”

Having a presence on the internet has proven invaluable, and Twitter is useful, too: “I think we generated about 50% of bookings over Twitter this year,” says Honor.

Life in France has been a wonderful change for the family. “We love it here,” says Honor. “There’s more time for family life, trying new things and living an outdoor lifestyle.”

The couple recommend thorough investigation into any artisans you might need to use. “We were always on-site, doing the work ourselves,” explains Simon. “But we know people who have allowed artisans to work in their absence. You really need to have someone to oversee the work. Personally, I would have hired a project manager if we hadn’t been doing it ourselves, having met people who have encountered problems.”

www.maisondelaroche.comMore successful renovations in France: a gîte renovation in Normandy and renovating a house in Aveyron