Real life: a family-run restaurant in the French Alps 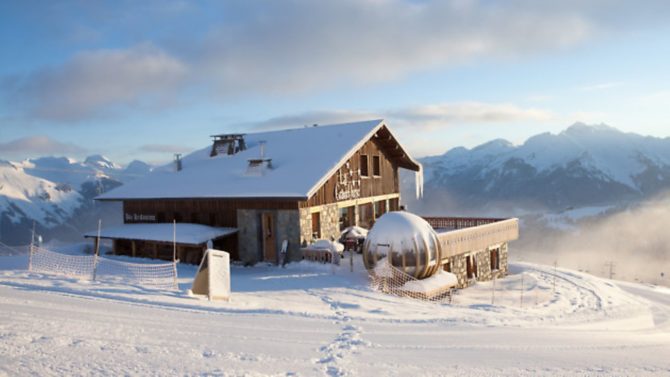 Going off the beaten track in Portes du Soleil, Ben Palfreyman meets three generations of Brits who have carved a life and home out of these ancient mountains

Rising above the chalet roofs of this traditional Alpine village, the slopes of Mont Chéry are the unsung heroes of the local skiers. While tourists and ski schools make for the more accessible pistes on the other side of Les Gets, those who want fresh snow and phenomenal views can do little better than head across the valley to this quieter spot.

I arranged to meet the Venning family after the lunchtime service at their restaurant and home, La Grande Ourse, which sits invitingly at the summit of the mountain. Taking the opportunity to arrive early and get my skis on, I spent a couple of happy hours on the red and black runs that Mont Chéry offers, as well as chancing my arm in the snow park immediately beside the restaurant, where freestyle snowboarders and skiers enjoy a good range of jumps, rails and boxes.

When I finally tore myself away and went inside, some guests were still finishing their meals, taking the time to enjoy their desserts while chatting and laughing – often quite uproariously – with Gary and Theresa, the patriarch and matriarch of the family.

As the guests leave, the members of the family finish their duties and start to introduce themselves. Hailing originally from Cornwall, Gary and Theresa have two sons: Gareth, married to Lianne, and Ross, married to Sarah. Both couples each have two young daughters, who all go to the village school down at the bottom of the mountain.

“I have never experienced such a family-based village community as I have now in Les Gets,” says Lianne, who lives with her family in a house in the village. “We feel totally accepted and it’s so nice that everyone knows everyone else – and all their kids!”

“We think of it as being what Cornwall was like back in the ’60s,” says husband Gareth, “except here you always get your three kisses in the morning.

“If we wake up in time, and it’s a nice day, we often bring the girls out for some skiing before the pistes and ski lifts are open,” Gareth continues. “There is nothing better than a cheeky run before breakfast, and once we are at the bottom of the slope, we then radio up to the restaurant and someone will come and collect us on the Ski-Doo.”

This old-fashioned charm was very much a major factor when it came to choosing a place to live in France, but for Gary, it was the sense of place that made him fall in love with Mont Chéry.

“It is the view that seduces you,” he says. “You can just forget about what’s happening in the rest of the world, not only because we live the old French rural way of life, but because in the stillness of the mountain, there is nothing here, except us, our Cornish Labrador and the marmots that lie in the wood pile – oh, and the odd bear.”

Named after such a rare visitor, La Grande Ourse (the great bear) was built in 1936, but was lying empty when the Vennings discovered it back in 2005.

“We had a number of businesses in the UK at the time, but we always liked to do things for a season, sell up and then start again, and we were ready to take on our next project,” Theresa tells me. “We viewed 50 properties, made a shortlist of our favourites and then took our children around to see them all.

“Having already sold the nursing home we ran in the UK, we were fortunate enough to be cash buyers, and once we had made our decision, everything went very quickly – in fact, we were in within weeks.”

The skills that the Venning family had gained over the years came in handy when it came to transforming the property into the high-end restaurant and comfortable home that it is today. Gary was able to do the plumbing and Ross the electrics, while Sarah spent a good few days sanding.

The fireplace was Gareth’s project, a stunning blend of stone hearth and wood-clad chimney. Wrapped around the chimney is a simple staircase which was cleverly crafted out of one tree.

That first summer, the whole family was busy stripping out old rotten wood and mice-infested insulation, as well as getting local artisans on board including stonemasons and carpenters.

This hard, honest work is very characteristic of the family. “We like to work hard and play hard,” Theresa says energetically. “Having a business in France is tough, especially if you want to develop that business, and you need a bit of that rough Gallic spirit to get by.

“People around here are mountain folk, and we found the more we suffered at the start, the more we were accepted! Locals don’t like people who move here from the city and don’t live through the harsh realities of life, but if you go out of your way to help others (like signing up to the all-important mountain rescue) and are willing to compromise then you will fit in.”

While working hard is inevitable, especially when your ethos is to make everything fresh and buy locally, it is also easy to play hard in the Alps. In the summer, the family go mountain biking on the Chavannes, situated on the other side of the village, while at the top of the slopes, right outside the house, is a popular place for paragliders.

“Local food and drink are unbeatable here too,” says Gary. “Of course, we buy our cheese from the market, but many people don’t know that cumin seeds are grown in the mountains, and the Savoie’s tomme au cumin is a great hard cheese. My tip is to buy fresh cheese made from the premier lait, the first milk of the spring, as that often gives the best flavour.

“We also like to sample different génépis and, like wine, you can taste the different styles. My favourites are the ones with a strong amber colour – they tend to be slightly syrupy and are of excellent quality.”

Their passion for good food and drink is evident in the restaurant of La Grande Ourse, and while the promise of outstanding views over Mont Blanc is why many people decide to visit, it is the honest food and vivacity of the Venning family that makes them come back.

As the sunlight faded, and I boarded down the mountain to catch the last gondola home, I realised that I too, for just a few short minutes, also had the slope to myself. The lights of La Grande Ourse twinkled seductively above, a safe house in the snow.

More in Skiing in France