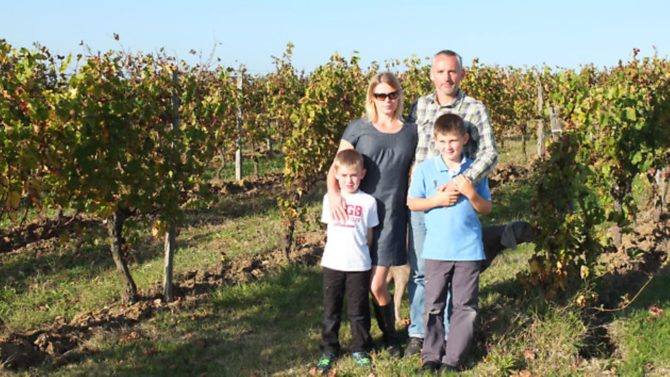 Our first year in France was really about the family. We have two sons; our eldest, now nine, was a baby when we first moved, and our youngest was born here. Essentially, they are French boys, and have only ever been to a French childminder and schools, plus their friends are all French. They are growing up in a safe environment, with lots of space to run around and live in a big house. There’s no way we could afford this much space in the UK. The school system here is very good, and costs almost nothing from the age of two and half; you need to budget for school books and lunches, though the latter are subsidised.

We love life here, and any downsides of French life versus the UK are very much outweighed by the benefits. There is far less traffic, stress and general aggression in society. It can be very quiet here, particularly in the winter, but if we’re desperate for more life or culture, we go to Bordeaux which is only an hour’s drive away by car.

From a business perspective, we set up a small business which can be tricky, as the infamous French bureaucracy can be frustrating. We make and sell wine – 75% to the UK and the rest here in France – and we also run a B&B, which we launched in 2012. The business is growing quickly, so we could not ask for more at this stage.

It can be tough as a small, organic vineyard to make a profitable venture, even if the wines are good. We consider the fact that we are still here and growing, is in itself rewarding! We are also very keen on honest feedback, so when we get complimented on the wine, and the same applies for our B&B, we are delighted with the response.

If we could do things differently, it would be the building work that we carried out to the property. We spent four years renovating and extending – we did have a reasonable idea of costs, but things took a lot longer than we anticipated. Had we employed a project manager, it would have been completed sooner, been less intrusive, and probably would have ended up costing less overall.

Having lived in France for some time now, our advice to others thinking of making the move would be to figure out what you are going to do, think about how it will work, and make sure that you do not underestimate costs. Be realistic. If you have an idea in mind, then talk to others who have done something similar. Treat a house purchase as you would in the UK; don’t just get sucked in by the romance, or climate; be objective and analytical. Spend some time in the area you are looking at before buying, perhaps renting for six months or more, in order to really get the feel. Then, just focus on the best areas that meet your needs, both in terms of peace and quiet, and that access facilities which meet your needs. And – most important of all – learn the language. Don’t be scared to jump in. The only way you’ll learn is by making mistakes. And smile!”

www.latourdechollet.comRead about expats running a successful hotel in Burgundy