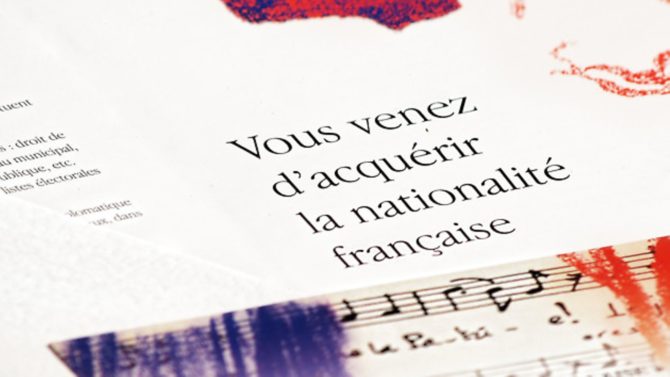 Having lived in France for 20 years, Mark Sampson and his family decided to celebrate by becoming French citizens. He explains the process for those thinking of doing the same

My family and I decided to apply for French citizenship in September 2015 when celebrating 20 years in France. Our decision was made all the more pertinent when the UK voted to leave the EU, and our future as expatriates suddenly seemed uncertain. Without our rights as EU citizens, what would become of us, our home, my wife’s business, our medical safety net, my small but inflation-linked UK government pension, our freedom of movement? Everything we had taken for granted?

What does applying for French citizenship entail?

Getting your birth and marriage certificates translated

Fortunately, we found someone we knew and liked to do ours, which always makes the writing of cheques more palatable. I felt righteous and ready once our tanslated documents arrived – only to discover on close reading of the application form that we had overlooked the language test…

My daughter and I were exempt from the language test – I was excused due to being over 60 and she because of her baccalauréat (and we urged her to underline the 20/20 mark for her French oral in her personal statement to accompany her application). It was only my wife who had to prove her linguistic competence, despite almost 20 years of working predominantly with French clients. She enrolled (expensively) for a test de connaissance du français, or TCF, at the Conservatoire National des Arts et Métiers (CNAM) in Limoges.

Her oral exam involved a kind of 5-6-minute role-play, which was recorded to be sent off for marking. An additional written exam involved two people speaking rapidly about a chosen subject a the basis for 29 multiple-choice questions to be answered inside 25 minutes. While scoring the top mark in the oral, she scraped a pass in the written.

Once again, though, we underestimated the time these things take and couldn’t book three same-day interviews online until the back end of August. This did at least leave us plenty of time to assemble the dossiers. Just as well, since I discovered that I needed my first marriage certificate. A divorce decree, it seems, is no proof of matrimony.

We left the application form – in triplicate please – to last. To one Sunday, in fact, when we gathered at the dining table to assemble our dossiers. Generally a harmonious family, the tension got to us during the process of photocopying and collation of the seemingly countless documents required.

After we has photocopied and collected all the documents required, the next step would be travelling to Toulouse for our appointment at the Bureau de la Naturalisation.

The process of queuing outside the préfecture’s Bureau de la Naturalisation with a motley crowd of immigrants and refugees was salutary. Many of them would be without even the security of papers. Even as ‘Brexpatriates’, we were the lucky ones.

Not that I felt quite so philosophical sitting outside the interview room when our daughter emerged as the chosen guinea pig to inform us that the notes we had downloaded to accompany our application forms differed from their notes. Fortunately, our two inquisitors proved human. We weren’t disqualified on the spot merely asked to forward certain missing documents

Both women spent much of the allocated time typing our answers to such questions as: Who is the symbol of the French Republic? What are its founding principles? Who is the current Prime Minister? What do you like doing with your wife?

In my earnest attempts to persuade the powers-that-be that I will make a worthy citizen, I wrote in my personal statement – and repeated to my examiner – that my principal reason for wanting dual nationality was that I have spent the happiest days of my life in France and hope to end my earthly tenure here. It’s true. True, too, that the process is a bit of an ordeal. You have to seriously want to jump through the hoops to receive the reward of security, the right to vote and the pride of telling someone, “Yes you guessed that I’m an Anglais, but I am also French.”

Now we wait, and we hope. And if we are granted citizenship, we plan to mark it with a glass of champagne (not Prosecco!) for some fellow communards at the mairie.

Are you applying to become a French citizen? We’d love to hear from you – email us your story

What effect could Brexit have on Brits in France?

Previous Article Win! A copy of the book, Bernard Buffet: The Invention of The Modern Mega-Artist
Next Article 9 French ski resorts you can reach by train