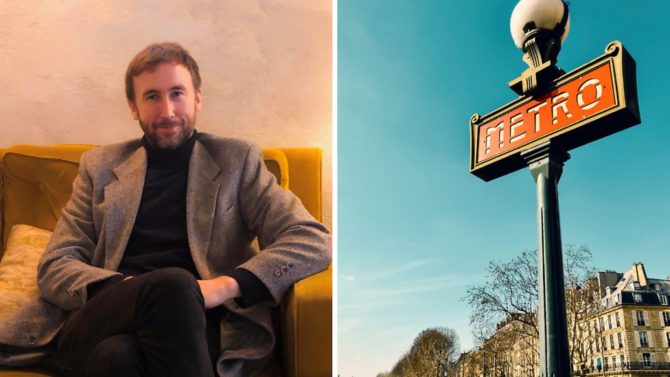 Clinical psychologist Francis Merson moved from Australia to Paris to open an English-speaking practice in mid-2019, and working with expat families in the French capital is proving to be particularly rewarding

Born on the sunny shores of Sydney Harbour to a British mother and Australian father, Francis Merson spent his 20s traipsing around Europe as a journalist. After spending the last decade studying, practising and teaching clinical psychology in Sydney, he moved to Paris to open an English-speaking practice in mid-2019.

Why did you decide to move from Australia to France?

I’ve been in love with French culture since my teens. While other kids in Sydney were surfing and listening to AC/DC, I was into Serge Gainsbourg, Jean-Luc Godard and Apollinaire. You can probably imagine how popular I was. I did exchanges in France at high school and university, followed by countless holidays. I suppose I’d been in a long-distance relationship with France for years, and thought I’d finally move in and make it official.

What made you choose Paris in particular?

After studying and holidaying here, it almost felt like home. Paris is a magnet for interesting people from around the world, and so I knew I could count on a stimulating social life. Paris also mixes beauty and grittiness in a way that I’ve always found enchanting.

What are the biggest differences between Australian and French culture that you have noticed so far?

The bureaucracy here has called on all my psychological powers of detachment! But I’m always impressed by how politically engaged the French are – a big contrast with Australia. There are strikes happening right now in my neighbourhood near the Bastille, and you can smell the spirit of the Revolution in the streets.

Did you move to France in order to work as a clinical psychologist there?

Part of what motivated me was hearing some horror stories of expat friends trying to find therapists in Paris. One poor girl was invited to a first consultation in a street café, and after listening to an account of the therapist’s romantic liaisons, was charged €300 for the session! This kind of story really upsets me: people who need help are being taken advantage of. Of course, there are definitely some wonderful, qualified English-speaking psychologists in Paris, but perhaps not enough to meet the needs of the 100,000 or so English speakers here. In short, I thought Paris was a place I could do useful work and help people – which is what it’s all about.

How to make great new friends in France

How expat groups can help you integrate in France

How did you find the process of setting up your business?

I’ve managed it alone, but I took many, many wrong turns in the labyrinth of French bureaucracy. It must be more than twice as hard for non-French speakers, as there’s little information in English.

Were your qualifications transferable and recognised in France?

Non-EU psychologists need to have their qualifications recognised by the French psychology commission, which involves translating a lot of documents into French. Otherwise it’s actually not too complicated.

What services do you offer?

I offer treatment for mental health problems such as depression, anxiety stress and OCD, but I also see people who are struggling to deal with life crises, or adjust to life abroad. There are many expat families in Paris, and I find working with children and couples particularly rewarding. Importantly, I use only evidence-based treatments such as Cognitive Behavioural Therapy (CBT). These are treatments whose effectiveness has been validated in multiple research studies, which means people can be confident that they’re getting the best treatment for their problem, and that their time in therapy will be worthwhile.

Are your own experiences of living as an expat helpful?

Definitely. Because I’ve been there too – especially in my early years of living abroad. Moving to somewhere like Paris can seem so glamorous and exciting that people ignore the potential negatives: loneliness, disconnection, cultural difficulties, disruptions to family life, homesickness, relationship stress etc. And it can be hard to deal with these things without your normal support network. That’s why the role of a psychologist is so important in an expat community – people need a lot of support.

Mental health awareness is generally a big topic at the moment, have you noticed this in France too?

To a much lesser degree in France than in English-speaking countries. Of particular concern is that the treatments for mental illness in France are often quite far removed from what the latest research suggests is best practice. All those psychoanalysts who keep patients going for years without any tangible benefits – it beggars belief! Hopefully these practises will gradually fall away as mental health awareness increases.

How does the French healthcare system work?