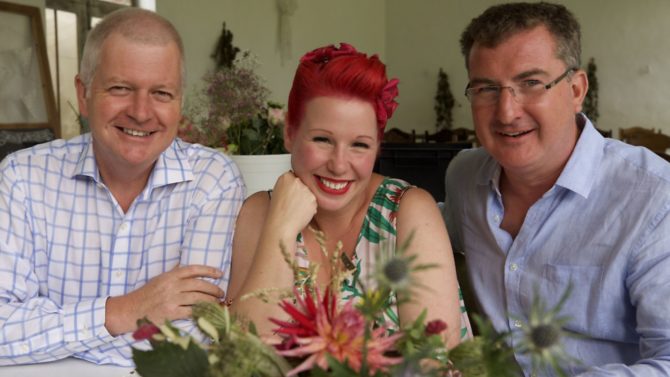 Who better than Dick and Angel to lend a helping hand to château owners in France? Meet the Brits who star in the new TV series and find out how the couple helped them bring their French châteaux back to life

Where: close to the village of Montenay in Mayenne

What: with the help of family and friends, the couple have been bringing the 18th-century château back to life with a lot of painting, plastering, fixing leaky roofs, restoring windows and browsing French antique shops. The château now has a luxury guesthouse that can accommodate up to 14 people and on the last Sunday of every month, the grounds of the château open up to the public where people can walk in the forest, visit the flower gardens and enjoy the peaceful environment.

What happens in Escape to the Château DIY: Dick helps Billy out with his engineering knowhow while Angel gives her artistic insight into a project Michael is working on

Dick and Angel’s tips for renovating in France

Behind the scenes on series 2 of Escape to the Château

What: transformed the former medical institute into a luxury hotel and wedding and events venue. With extensive renovation work they stripped back the clinical veneer to reveal the château’s original features and filled the château with contemporary furniture which complements the traditional features perfectly. Find out more about Château de Jalesnes in our interview with Jonathan and Michael.

What happens in Escape to the Château DIY: Dick and Angel pass on their experience of hosting weddings and Angel puts on an impressive afternoon tea.

Who: husband and wife Philip and Angelina Baillie-Smith

Bought: renting Château du Bailleul for an undisclosed sum but it’s cheaper than the estate agents’ three-bed flat in London.

What: turned the 18th-century château into a venue for various events from small family gatherings to weddings, business retreats and even car meet-ups!

What happens in Escape to the Château DIY: Former army engineer Dick helps Philip and Angelina build a bridge at their château.

Dick and Angel on setting up their wedding business

What: the former 19th-century hunting lodge is now run as a luxury country house that serves table d’hôte in the summer months and also hosts wedding parties

What happens in Escape to the Château DIY: Angel taught our the couple’s son Joe how to make coddled eggs and she gave them tips on how to run a wedding business. Dick gives an overview of the financial side of running a château business and how to build your own barbeque.

What: Ashley and Johnny are still in the process of bringing the château back to life. Tasks completed include treating a termite problem and replacing the floors. Ongoing projects include replastering the walls, installing a mirrored ceiling and fitting a kitchen and bathrooms. The couple also plan to turn the outbuildings into an art and antiques gallery and open a boutique hotel.

What happens in Escape to the Château DIY: Dick and Angel help Ashley and Johnny in the search for their dream château and gives the pair a crash course in the dos and don’ts of château shopping

Behind the scenes on series 1 of Escape to the Château