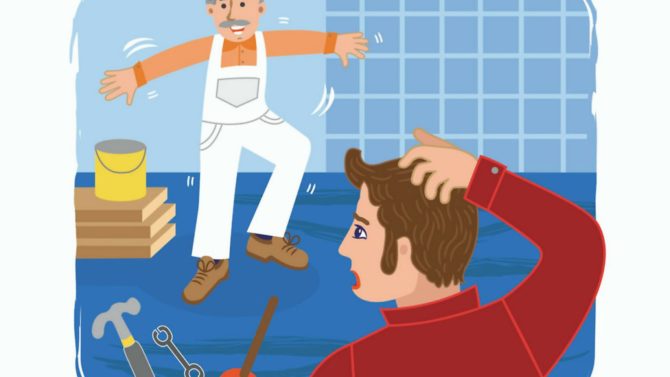 His chambres d’hôtes renovation continues and the builders are making progress, but Ian Moore soon learns there’s never a dull moment when communicating in a second language

For anyone not fluent in more than one language, you’ll know that communicating in anything other than your mother tongue is like a complex negotiating process. There’s the internal monologue with its own pitfalls, one-way streets and alarm bells; and the external conversation which needs to strike a balance between panic and outright gobbledegook.

French is especially punishing; direct translation particularly can be fraught with disappointment. ‘Dalle’ for instance means a stone base or plinth, which takes the lustre of 1980s French sex-siren Beatrice Dalle, when you realise her name is actually Beatrice Concrete Flagstone. Where French has great advantages however is that the natives, in a show of collective nose-thumbing at the authorities, shun of a lot of the rules, and there are a lot of rules, and just use noises and gestures instead. And while these are impossible to translate, they’re also pretty unequivocal in their meaning.

Escape to the château: Dick and Angel’s tips on renovating in France

Ways to save money when renovating a property

7 questions to ask yourself before starting a renovation project

Builders especially like a noise and gesture conversation, so much so that our ongoing chambres d’hôtes renovation is more like a game of charades with the help of the BBC Radiophonic Workshop. Gustave the builder has taken to punctuating all his sentences with the internationally recognised wavy hand signal of a slippery fish, presumably to indicate progress or forward movement; while adding the words ‘bing-bing’, which sounds like a cross between a microwave and self-censorship but which (I think) is French for lovely jubbly, though it’s a catch-all phrase.

Then there’s the guy building the stairs who flaps his arms by his side, accompanied by a pantomime shake of the head and the rasping sucking of teeth. It’s the space, he’s saying through the little-known medium of angry pelican impression, it’s not stair shaped. “Oh bing-bing!” interrupts Gustave with an aggressive fishy hand thrown in for good measure, though he gets a strong tooth-suck and an arm flap for his impertinence. You see, I’d prepared French for this exchange, expecting some language issues obviously, but short of inventing my own language and throwing in some slick animal movements, I’m way out of my depth.

I venture up the ladders to the father and son plumbing team, hoping for something from the talkies era. The son is standing in the corner of the nascent salle de bains, pretending to put shampoo in his hair. He has a bald head but this doesn’t put off his dad, who is making shower-like noises. The temptation is to join in the charade and pretend to throw Junior a towel, but the serious suggestion is that there isn’t enough height in the eaves for a shower, and Senior is worried. He holds up a finger, which says pay attention.

French words and expressions you need when viewing a house

21 French words to help with your DIY or renovation project

He goes to the corner of the room, to where the toilet will be, and turns his back on me. I’m very English about these things, and while any parent will tell you that once you have kids, morning ablutions become a spectator sport, I feel like I should leave them to it, give them some privacy. But Junior is shaking his head like a Labrador with wet ears, making low tut-tut sounds. His father, and I can’t see his hands but I can guess where they are, clucks like a hen disturbed in the act of laying. Again, the suggestion is a head height problem and I turn to address Junior who shrugs.

“There is a problem!” Dad says, finally elevating us above the beasts with some human language. I turn swiftly to take advantage of this break and there he is, sitting, as if on a chair that isn’t there, his left hand moving up and down above his head as if he’s lost a top hat. The inference, the charade, is clear to see and it’s just about more than I can bear.

“Bing-bing!” I hear from downstairs. Well, at least someone appreciated my joke.

How to navigate French bureaucracy

English food I miss in France