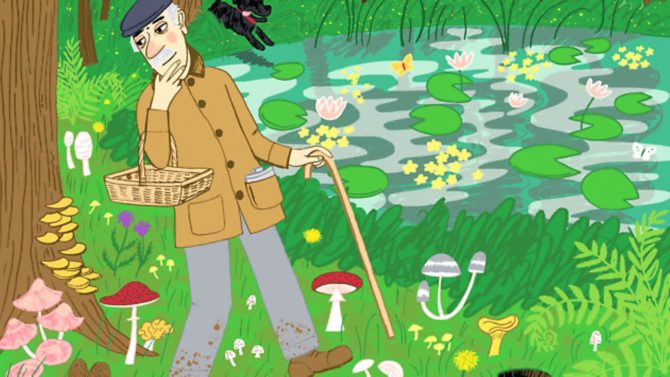 This month, an autumnal day out hunting for mushrooms in France takes a surprising turn for Karen Wheeler

Claude, one of the gang of ‘vieux gars’, or old boys, who meet together at the local café every morning, invited me to go mushroom picking.

Mushroom pickers, along with bird watchers, are the two groups most likely to receive an accidental bullet in the bottom during the hunting season but I accepted, imagining baskets laden with champignons.

On a sunny October afternoon, we set off from Villiers towards Gizay, a short drive from the village. We parked at the side of a ferny track and Claude, who is tall and thin, with the air of someone who has suffered great sadness, led us into deep forest, stopping by a metal gate and a ‘Private Property’ sign.

“It belongs to my ex brother-in-law,” said Claude. “He has given permission.”

A solitary white mushroom jutted out of the earth like a gatepost to mushroom land. We jumped the gate and followed the grassy track – my little dog Biff performing bunny hops – to a scene of such staggering beauty, it made me gasp.

Before us was a large pond, circled by a necklace of reeds, ferns and wild grasses, its surface dotted with lily pads and pink flowers. I followed Claude up a small bank and around the path surrounding the pond, as butterflies – cabbage whites and a small orange variety – danced around us.

It was all so lush and green, it was like viewing the world through a forest-tinted filter, and even the tiniest fleck of colour – dandelions or the purple thistles in the long grass – was like an electric jolt to the eyes. I looked down and saw that the damp, forest earth was carpeted in all kinds of exotic fungi.

“No, they’re not good,” said Claude. And then out of the blue (or rather the green), he promptly declared: “I’m in love with a woman in Villiers.”

Seeing my look of alarm – this was a strange conversation to be having in the middle of the forest – he added: “Don’t worry, it’s not you.”

I breathed a quiet sigh of relief. Frenchmen can be a little… surprising.

“Although there are a dozen differences between us, I think she might like me,” he continued. Then suddenly, he fell to the ground.

I rushed to pick him up, thinking that all this pent up passion had triggered a heart attack. We were in the middle of nowhere and I didn’t have my phone with me. How was I going to get him back to the car?

But after a terrible and long pause, he got back to his feet. “There was a hole in the ground,” he said, brushing himself down. He looked up at me sheepishly: “I’ve had too much to drink.”

I’d noticed his unsteady gait but assumed it was due to arthritic knees. We slowed down to a snail’s pace as I was worried he might keel over again. And anyway, I wanted him to focus on the fungi.

There were hundreds of them: some the size of dessert plates; others small and delicate, with caps no bigger than a five-centime coin. A few looked downright malevolent – with spots or a blush-pink tinge to the cap; and one large mushroom, all alone, had a frilled neon yellow underskirt.

If you were a child, you could easily imagine fairies living in colourful mushroom houses and reposing on the beautiful lily pads in the pond.

“Don’t worry, there will be ceps up ahead,” said Claude, with strong conviction. Several times…

It seems that someone had got there before us. We walked for hours and didn’t see a one single edible mushroom. But it’s one of the best walks that Biff has been on. And a couple of weeks later, I was pleased to see Claude walking around the village arm-in-arm with a new lady friend.

Read about Karen’s night out at a Bollywood-themed party