Janine Marsh: “I thought, why not have a few fluffy little ducklings running about the place” 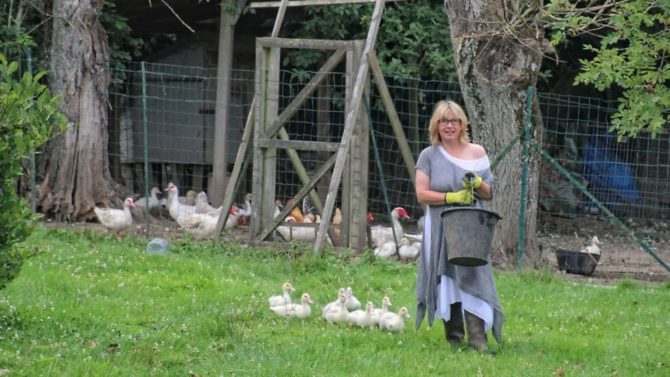 Her neighbours all think she’s quackers, but for Janine Marsh her ducks are pets, not for the pot

Early summer means roses in these parts. The northern climate is perfect for growing them and just about every house in my village in the Seven Valleys, Pas-de-Calais, has roses in pinks and reds  of every hue growing over fences, around doorways and up walls. Walking the dogs, we wander through a waft of magnificent fragrances, and pass neighbours in their gardens cutting blooms to scent their homes with.

It’s also the time when my chickens and ducks get serious about becoming parents. A few years ago, as a complete novice at poultry keeping, I got a few ducks, all female, to keep as pets and for the delicious eggs. Then I thought, why not get them a boyfriend and maybe have a few fluffy little ducklings running about the place. The plan worked perfectly.

Or so I thought.

Two of the ducklings were male. The next year, more than a few ducklings arrived. They were so sweet, quacking in delight when they saw me, following me everywhere adoringly. The year after, we had 52 ducklings. Suddenly we were no longer hobby poultry keepers, we were on our way to becoming a fully fledged farm. And I must tell you that many ducks is competition for the scent of roses…

Much as I love the cute little baby ducks, when they grow up all they want to do is eat and procreate. I set out to find the newbies new homes. I had strict criteria; they were to be pets, not for the pot. I put the word out and straight away a couple of Brits who lived in a château nearby took three females and a male called Henri though they renamed him Bill. They had a lake in their garden already filled with ducks, and my ducks took to it like, well, ducks to water. Alas, a week later the couple rang to beg us to take Bill back. A regular Casanova, every single one of their ducks was now nesting.

I drove my ducks all around the region, delivering them to people who assured me they would only ever be pets. My neighbour Jean-Claude thought I was quackers: “They’re the biggest ducks in the village, perfect for canard à l’orange,” he said licking his lips.

By the end of three months, all the females were rehomed with loving families, except for two I couldn’t bear to part with, Belle and her daughter Bella. No one wanted the males; they are obviously a lot savvier here than I am at this keeping ducks malarkey. I was left with nine boys who have to be separated, three to each of my three pens, as they are more like bar room brawlers than birds.

When Belle died, Bella pined for her so much I found her a happy home where she adopted a baby duckling and lived happily ever after.

I am still left with nine male ducks. But now I can wake up and smell the roses…

Janine Marsh is the author of The Good Life France and My Four Seasons in France. This piece was first published in French Property News.

Ian Moore: Dressed to impress at the vets

Previous Article Explore Marseille by e-scooter
Next Article Learn French: 10 questions to ask when buying a house in France