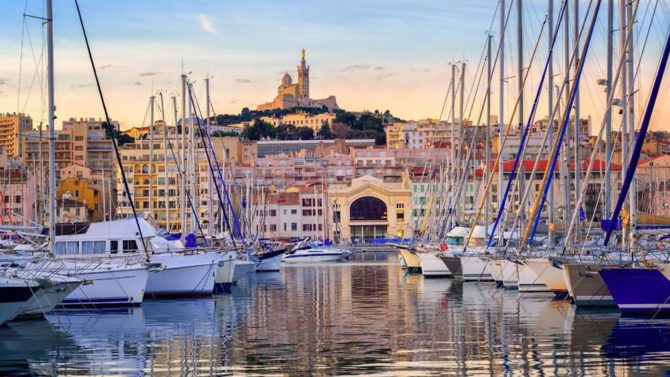 Renting an e-scooter makes for an entertaining, economical and environmentally friendly way to explore France’s cities

This is fun! That’s what I’m thinking as I scoot beneath the vast mirrored ceiling of L’Ombrière de Norman Foster in Marseille, past the row of seafood stalls on the Quai de la Fraternité and down the Quai du Vieux Port, overtaking a petit train packed with sightseers. Unlike them, I can choose my route and go as I please.

This is the first time I’ve rented an e-scooter, but I’m sold on the idea already. I’m not alone. The trottinette électrique is green, clean, cheap and fun for riders of all ages, from tots to grandads.

While the UK has yet to approve e-scooters on public roads and bike trails, France has jumped on the ‘micromobility’ trend in a big way. According to e-scooter rental company Lime, which introduced its service to Paris in June 2018, 11% of Parisians use e-scooters often and one out of every 100 journeys in the capital uses one of Lime’s scooters – that’s equivalent to 50,000 riders every day.

Renters like the convenience of being able to pick up and drop off their ride wherever they like (there’s no need to return it to a base or dock) and Lime claims a scooter ride shaves an average 10 minutes off the average trip.

Not everyone is so keen. With 40,000 or more e-scooters swarming Parisian streets, a rash of accidents in 2019 prompted mayor Anne Hidalgo to introduce penalties for speeding, riding on pavements and careless parking, and police confiscated hundreds of scooters.

The trottinette isn’t just for locals on their daily commute. For visitors, it’s a great new way to explore cities like Paris, Bordeaux, Lyon and Marseille, where rival rental companies like Lime, Bird, Tier and Voi have grown rapidly in the last couple of years. You can expect to see them popping up in more French cities soon, although the Covid-19 pandemic has forced them to put expansion plans on hold for now.

Renting a scooter is simple – you just download an app to your phone to find and unlock the nearest one available and pay for it at the end of your ride. There’s a flat fee to start, and you pay by the minute thereafter. There’s cut-throat competition on price at the moment as rival rental companies try to build their empires. Shop around to save money but expect to pay around €10 for an hour’s scooting.

E-scooters make easy work of exploring large French cities like Paris, Marseille, Bordeaux and Lyon, with their broad quays and extensive cycle networks. Scooting along the Seine or the Rhône or along the Marne and canals lined with pretty, half-timbered buildings in Châlons-en-Champagne, beats footslogging or hanging around waiting for city buses any day.

In Marseille, I zipped along the sunny Vieux Port quayside in less than 10 minutes, past rows of anchored yachts to the city’s top attraction, the spectacular Musée des Civilisations de l’Europe et de la Méditerranée (MuCEM). The steep narrow streets and occasional flights of steps of the city’s hilly old quarter, the charmingly scruffy Panier district, were more of a challenge – but the beauty of renting an e-bike, I discovered, is that when confronted with terrain that challenges its capabilities, or when you want to pause for refreshment, you can simply abandon it, continue on foot, and pick up another ride whenever you want.

In short, once you’re feeling confident, e-scooters are a brilliant, blister-free, time-saving way to go. But if you’d rather start off by learning to ride with an experienced scooter mentor, lots of French cities have companies that offer guided trottinette tours for small groups.

In Marseille, Trolib guides lead squads of pink-jacketed riders around town and further afield around the pretty harbour villages of Cassis and La Ciotat, amid the spectacular coastal scenery of Les Calanques.

Bordeaux is another city that’s made to measure for scooter riders, and Bordeaux Trip’s guided tours loop along the Garonne and its quais between the Pont de Pierre and the tree-lined Esplanade des Quinconces and along 18th-century avenues, passing riverside landmarks like the spectacular Miroir d’Eau, the city’s vast reflecting pool located in front of the Place de la Bourse.

And for something a bit different, you can explore Paris after dark by e-scooter with Insolite’s night-time fun tours along the Seine and through the Tuileries to Place de la Concorde and the Champs-Elysées, with the lights of Notre-Dame, the Louvre and the Arc de Triomphe as your beacons.

After just a couple of days fooling around on my French trottinette, I’m hooked. In fact, as soon as they become street legal back home in Edinburgh, I’m going to buy one of my own.

Rules of the road

Wearing a helmet is not compulsory in towns and cities, on voies vertes or on cycle paths, but is highly recommended. Wearing a high-visibility jacket or gilet is mandatory at night or in poor visibility. E-scooter guided tour companies provide helmets and high-vis vests. In built-up areas, you must use bike paths or cycle lanes where they exist. Where there aren’t any, e-scooters may use the street. Riding on pavements is punishable by a €135 penalty. Outside built-up areas, e-scooters are allowed only on cycle paths and greenways. Most e-scooters have a top speed of 25km/hr (15mph) and a range of up to 50km.

Previous Article Will my lasting power of attorney work in France?
Next Article Janine Marsh: “I thought, why not have a few fluffy little ducklings running about the place”