Janine Marsh: Anything can happen on a promenade in rural France 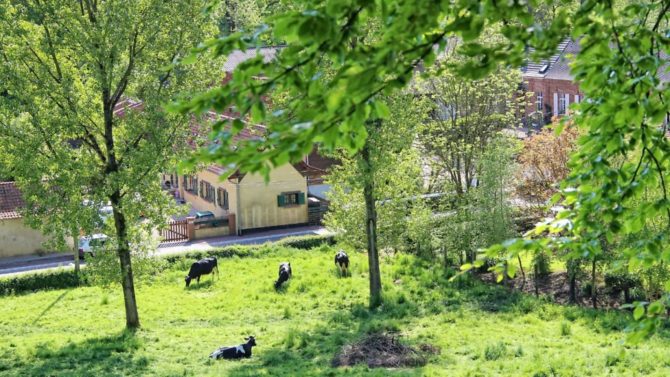 A twice daily walk in the French countryside is a staple for Janine Marsh, who never quite knows what she might come across

Promenading is a popular ‘sport’ in France. There’s nothing quite like ambling along the swanky Croisette in Cannes or the Promenade des Anglais in Nice, dressed up in your finery and feeling on top of the world. It’s no different where I am in the middle of nowhere, rural Pas-de-Calais in northern France.

Admittedly, we don’t have a sea view. We don’t have bars, restaurants or shops either. Or tourists. But people still like to go out for a promenade. In fact I do it twice a day with my husband Mark and three dogs, Churchill, Ella Fitzgerald and Frank Bruno, mainly on account of the fact that I am unable to resist anything tempting in the form of cakes, wine, cheese, bread, chocolate and a few more things.

We leave the house, wander down the hill, up the steep rue du Chapelle and past a tiny chapel, topped by a rather stern- looking saint who points to the lush green hills that make up the Seven Valleys. The dogs chase each other through fields filled with maize and hay, the main staples grown by farmers in my village. They run along the fence where Monsieur, a local man whose name we still don’t know after 14 years here, keeps his horses, huge creatures known as Boulonnais. Nothing much happens on these walks but the sheer outstanding natural beauty of the area means I am never ever bored by it.

When I say nothing ever happens, that’s not quite true.

We pretty much go the same route every day, turning left at the chapel. But one day the dogs turned right, down a little alley, barking like maniacs. We followed them to see what all the fuss was about and found ourselves face-to-face with an enormous cow feasting on a flower bed in the front garden of a tiny cottage. As we watched, a pepper pot sized old lady came out of the house. “Merde,” she said when she saw the huge beast munching away. She went back in and came out with a length of rope, tied it round the cow’s neck and tried to pull it off her flowers. It wasn’t budging.

“Bonjour Madame,” I called “can we help?” She beckoned us in and we all pushed and pulled. Madame Pepper Pot’s husband joined us (he was tiny too) in this unequal tug of war. After a while, the seemingly immovable cow got the hump and lifted its head from its floral banquet to moo loudly. The dogs howled, startled by the loud noise. That did it. The cow blinked in surprise. We seized our chance, heaved hard, the Pepper Pots pulled and the cow lurched forward. When we got it back into the field behind the cottage from where it had evidently escaped, Madame Pepper Pot gave us a litre of fresh cow’s milk as a thank you. Of course we shared it with the dogs – it was teamwork after all!