Ian Moore: on the changing rules in French restaurants 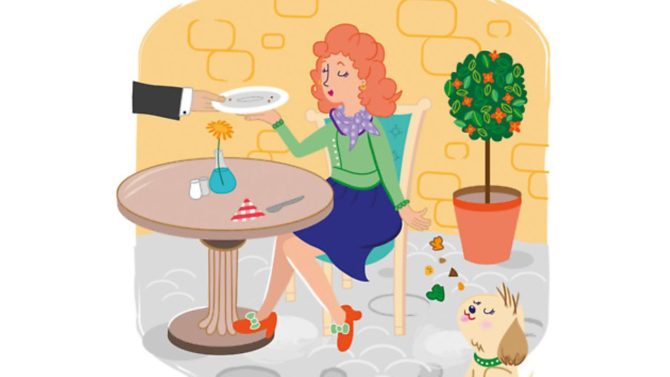 Would you ever ask for a doggy bag to take home your leftovers in a French restaurant? Ian Moore can’t imagine the French ever accepting ‘le doggy bag’

We all know how seriously the French protect their ‘Frenchness’. The boundaries drawn around the French language, for example, are legendary albeit possibly futile in the global world we live in. ‘Le weekend’ anyone? The march of change is inevitable, but if there’s one thing I thought would never get interfered with, it’s the French and their table habits.

I’m not talking about cuisine here, French food is French food. No, it’s the rules themselves, the etiquette; the very essence of Frenchness itself. In short the ‘doggy bag’ has arrived.

Growing up, table etiquette in our house was being told not to put your elbows on the table, eat with your mouth open or hide uneaten sprouts in a plant pot. If we left any food at all, we were reminded of our economic responsibilities, not social protocol, but in France, leaving food uneaten on your plate is the height of bad manners and a serious insult to the chef.

Despite this, French restaurants are now ‘obliged’ to provide a doggy bag for any customers prepared to risk social ostracism by not eating all of their food and instead asking to take it home with them. Personally, I’ve only ever seen tourists ask for a doggy bag in France and only then with cuisines already associated with ‘take away’, for example a Chinese meal or a pizza. I’ve been in restaurants in Paris where a waiter has given me the full level of his Grade A snooty condescension just for ordering a meal in the first place. And that was to be served on a plate! Heaven knows what his reaction would have been had I shunned the plate and venue, preferring instead a bag and home.

I had actually always thought that the reason dogs themselves are allowed into so many French restaurants was to eliminate this problem at source. You want to avoid the filthy looks of fellow diners by not finishing your meal? Buy a small dog and put it at your feet throughout the meal. Seriously, I’ve never seen a diner with a dog in France ever send back anything other than a clean plate.

So if that’s a system that works, why change it? To the French, ‘doggy bag’ usage is strictly an American thing and there to cater for America’s insistence on portion sizes that would sink a small ship. The French are convinced that their portion sizes are perfect so I can’t honestly see anything changing all that much; it’s difficult to change a nation’s culture.

The real test will come if it takes off to the extent that the Académie Française actually feels compelled to introduce a French term for doggy bag, rather than stick with the current ‘le doggy bag’. I suspect not; they’ll do like everyone else and just sweep it under the table.

The differences between British and French comedy

Previous Article Enjoy a summer break in La Rochelle
Next Article What healthcare are retirees entitled to in France?