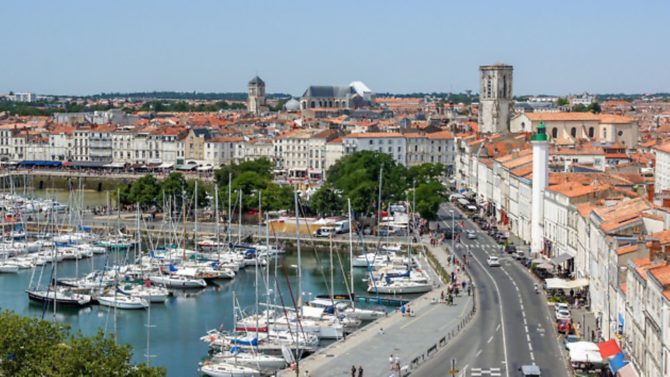 Set beside the Atlantic Ocean in the Charente-Maritime département, the city of La Rochelle has a proud maritime heritage. It was one of France’s most important ports from the 14th to the 17th centuries and acted as a gateway to the New World.

Nicknamed the ‘Ville Blanche’ (white city) due to its luminous limestone buildings, La Rochelle is a charming mixture of old and new, with arcaded stone walkways, timber-framed buildings, a large, modern marina and state-of-the-art aquarium.

Begin your visit with a stroll along the narrow, cobblestone streets of the historic centre, with their chic boutiques, arcaded walkways and hôtels particuliers. One attraction that is hard to miss is the Tour de la Grosse Horloge, a Gothic-style clock tower built to protect the city from sea-borne attacks.

History buffs will want to visit the Musée du Nouveau Monde in Rue Fleuriau, which explores the city’s role as a point of departure for 17th-century settlers heading to the New World. Just a couple of streets away in Rue Gargoulleau lies the Musée des Beaux-Arts, where you will find a rich collection of works from the 15th to the 20th centuries. Local realist artists, including eugène Fromentin, William Bouguereau and Théodore Chassériau, occupy a special place here.

To appreciate fully La Rochelle’s former maritime importance, head to the Vieux-Port, which is dominated by three 15th-century towers. The most interesting is the Tour de la Lanterne, the only surviving medieval lighthouse on the Atlantic coast. It was once a prison for pirates, British seamen and Huguenots, and still has traces of english graffiti carved by inmates in the 18th century. The oldest of the three is the Tour de la Chaîne, which houses a permanent exhibition on the first settlers to Québec and provides breathtaking views over the city.

For a lunchtime feast, stop at Le Bar André, a maritime-themed restaurant that has become a local institution since it opened in 1950 as a small café. Tuck into generous platters of succulent seafood and moules simmered in the locally produced aperitif Pineau des Charentes.

Families will find plenty to enjoy at the Plage des Minimes in a modern district in the south of the city. It is the largest of La Rochelle’s three beaches and is a magnet for water sports enthusiasts, including sea kayakers and windsurfers.

The most popular tourist attraction in town and another family favourite is the aquarium, which features more than 600 species of marine life. Highlights include a huge, open-ocean sea world housing sharks and stingrays, jungle ponds full of piranhas and displays of seahorses.

For more information on what to visit and details of hotels and restaurants, visit www.holidays-la-rochelle.co.ukWith up to 85 departures a day, Eurotunnel Le Shuttle is the fastest, most frequent way to the continent by car, which means that La Rochelle is closer than you think. Book early and get the best fares. Visit www.eurotunnel.com or call 0870 850 8133 to book your crossing.

Previous Article July 2016 issue of FRANCE Magazine out now!
Next Article Ian Moore: on the changing rules in French restaurants