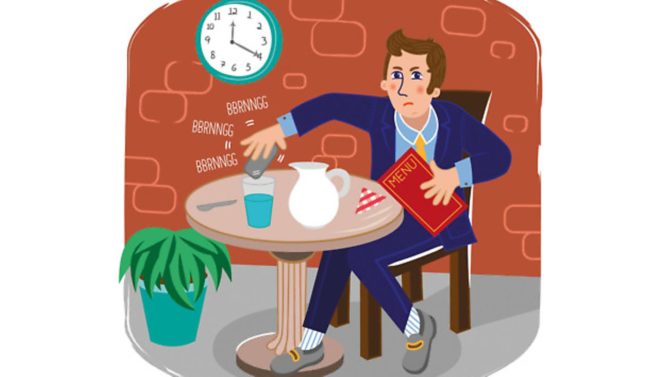 Are the hours of noon until 2 still sacrosanct in France or is the traditional French lunchtime under threat?

It’s pretty much a given that meals in France are sacrosanct, lunchtime especially. It’s a surefire bet then that if you’re at home and your phone rings between the hours of 12 noon and 2 o’clock that either something very, very serious has occurred or, and this is far more likely, it’s a sales call.

Actually, to describe lunchtime as sacrosanct is underplaying it somewhat; it’s far more important than that. It’s a symbol of the French way of life in itself and therefore, in a world hurtling towards dull homogeneity, something to be defended. Pity the UK office workers sitting at their desks during their manic ‘one-hour’ lunch breaks, cramming a shop-bought sandwich into their faces, still working at their computer screens. While over in France, those with similar occupations are sitting in a nice brasserie somewhere, whacked out on crème brûlée and considering a brief sieste before returning to the fray.

Ian Moore: How many times should you kiss in France?

Obviously not all French workers are knee-deep in napkins and post-meal ‘Who had what?’ discussions, but the country likes to give that impression. It suggests a happy population and a contented workforce, so why not? Young children at école maternelle (kindergarten) are even put to bed after their lunch, so this is taught from a very early age. It’s France! It’s lunchtime! That’s how we do things. You want to know how serious lunchtime is in France? Even car parking is free between the hours of 12 and 2. That’s right, even parking meters get a longer lunch break than most Brits.

It’s surprising then that the grit in this oyster of lunchtime tranquillity – the ubiquitous sales call – hasn’t yet been outlawed. It not only happens every weekday lunchtime, it can happen as much as three or four times that day. Sales calls, as far as I can make out, are intended to make the receiver buy something, and from my experience are usually conducted by ‘resting’ youthful actors doing their best to exhibit their full range of cheeriness. Not so in France. Clearly school careers advisers here are hand-picking some of the surliest examples of teenage grump and shoving them all into call centres, with strict instructions to let their grouchiness run free.

Ian Moore: the perils of the French language

Maybe this insolence is a sales technique, but more likely it came about as a battle of wills. French person receives call at lunchtime and responds impolitely, caller – who would like to be at lunch – replies with equal rudeness and the thing escalates into a heavyweight contest of impertinence. Of course, you can sign up to the liste rouge which is designed to remove your name and number from the ‘lists’ that they operate from, but the respite is short-lived. And there’s always some loophole which means that this next particular caller is special – a charity for example or, dubiously, ‘educational needs’. The worst are the automated ones, expecting you to hang on the line while the ‘real person’ completes the onerous task of disturbing someone else’s meal.

Honestly, it’s easy to see why people think that most of France is in a restaurant at lunchtime; they’re just trying desperately to escape their landline.

The French, in my view unfairly, are often described as rude. Maybe in the big cities they can be, but that’s big cities all over the world. If, however, you long for the comfort of traditional pigeonholing and rude French people are what you’re after, answer the phone at lunchtime. I’ve been insulted, had my language skills mocked and generally been sneered at by some anonymous phone flunkey who then wants me to stump up 20 grand for solar panelling.

And it is always solar panelling. Well, I’m not answering the phone any more. I don’t need to have that kind of abuse phoned in thank you very much. I have children who adequately fill that role.

Previous Article All you need to know about buying a French château
Next Article March 2017 issue of Living France out now!