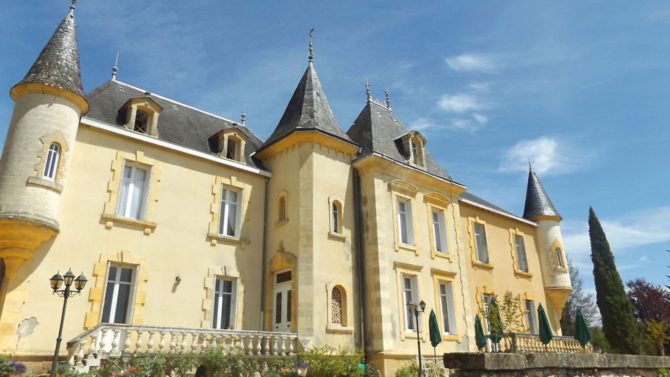 With its fairy-tale turrets and lush green gardens, Château Monteil in Dordogne could provide the ideal setting for a romantic novel. But this lovingly restored building is home to a love story of a different sort; by investing in this enormous property, former teachers Sue and Robert Birch (63) have been able to provide a secure future for their son.

Why did you buy Château Monteil?

“Our son, Mike (37) has autism and will never be allowed to live independently,” explains Sue. “We wanted to find somewhere he could live happily with freedom and space, while still being cared for by the family.”

The beauty and space offered by the property, teamed with its potential as a chambres d’hôtes, convinced Sue and Robert that Château Monteil could become the ‘forever home’ they were looking for when they viewed it in the summer of 2012.

However, as with most love stories, there were obstacles to overcome: the château needed extensive renovation to make it habitable, and several changes to render it suitable to receive guests. “When we first saw it, the château was derelict and so overgrown that some of the locals didn’t even know it existed,” explains Sue.

In fact, the couple’s second son Tim (35) who, together with wife Krys (28) has also joined the couple on their adventure, was the driving force behind the purchase. “We might have been daunted, but Tim wasn’t,” says Sue. “Tim is never daunted! He’d renovated a house in the UK previously and while this was very different, he could see where it could go and what it could be. We were swept along by his enthusiasm!”

We bought a château in the French countryside – and it was a bargain!

How did you start renovating the château?

Luckily, Tim was also able to carry out a lot of the renovation work needed once the family moved in: “The château had been left unloved for a decade or two,” he explains. “The beautiful thick wall fabrics were completely destroyed by damp and many of the beams had rotted. The building had barely any plumbing and the electrics needed a complete overhaul.”

While they hired professionals to redo the electrics and install proper plumbing, the family carried out the majority of the remedial work required, with Tim taking the lead, as his wife Krys explains.

“We had to strip walls bare and start again, using plasterboard and replacing rotten beams,” explains Krys. “Having moved in in February 2013 and with a self-imposed deadline of August 2015 for completion, we had our work cut out!”

Indeed, on arrival, their French dream was far from picturesque – with the château uninhabitable, the family spent the first few months in a small house in the grounds. “We call it our ‘hovel’,” laughs Sue. “It’s where Robert, Mike and I live now, but when we first arrived, we all had to live here – in two rooms! My youngest son Ben (33) came out for a break that summer and said we were living like the Bucket family in Roald Dahl’s Charlie and the Chocolate Factory!”

8 tips for renovating in France on a budget

What about the décor?

With its neatly cared for grounds and smart appearance the château is barely recognisable now, and the family have managed to create a luxurious and tranquil atmosphere in this impressive property. While not designers by profession, Tim and Krys formulated the colour scheme and room design after a great deal of research, exploring both modern and vintage design ideas.

“We opted for light blue throughout the guest rooms,” explains Krys. “We wanted to give our guests a restful experience, so deliberately chose a colour that is soothing. We combined this with simple, white linen to keep the décor simple and create a relaxed mood.

“The hallways in the château are narrow and long, so we chose a warm yellow colour to give the illusion of light and warmth – a summery feel – which sets off the parquet floor beautifully.”

Despite the château’s state of disrepair, the family have worked hard to maintain original features, including the coffered ceiling in the living room, which they renovated, sanding and staining the wood and covering damaged plaster. But Krys and Tim have also added a splash of modernity to the ancient building, by introducing contemporary colours in the larger reception rooms to create clean lines and a cosy feel. “We chose cappuccino for both the living and dining rooms,” explains Krys. “The colour highlights the original features, as well as making the rooms feel more intimate.”

Escape to the Château: a fairy tale in the Loire

Where did you find furniture appropriate for a château?

During the two-year renovation period, the family all helped to source furniture, sometimes driving miles to find the right pieces at antiques fairs or on online selling sites, and choosing both modern and vintage pieces based on their beauty and craftsmanship rather than specific design or period. “Some pieces are modern, some are antique,” explains Krys. “We love the mixture of old and new. We also adore tapestries, so we opted to have at least one tapestry in each room, usually with a romantic scene which fits in well with the château’s romantic feel.”

However, the family’s favourite pieces of furniture are two antique chairs, which they discovered at a local brocante. “At the time, we weren’t sure if we’d be able to buy the château as we were still waiting to sell our house in the UK,” explains Sue. “However we bought them with the hope that all would be well, and we now refer to them as the ‘lucky chairs’ as everything went so smoothly.”

Tell us about the stained-glass window

A feature that cannot fail to catch the eye is a large stained-glass window in the entrance hall. “We originally thought this was original, and that it had been made in Loire, as it was marked ‘Chartres, Loire’, but we found out its true heritage through a strange coincidence,” says Krys. “Last summer, one of our guests told us that he had been taught piano by a woman called Annie Loire, whose husband is a famous window maker: his designs can be found in cathedrals and churches worldwide. We contacted him and discovered a letter dating to 1978 thanking him for making the window! Now we know the window’s true heritage, we’re going to have the letter framed.

Is the renovation finished?

Although the château has been open to guests since the summer of 2015, it remains an ongoing project. “Tim is now working on renovating the attic to create an apartment for himself, Krys and their new addition, baby Owen, born this March,” says Sue. “And Robert and I still have to renovate our little house – we’ve been so focused on the château that we’ve neglected this a bit!”

Krys, too, continues to add finishing touches to guest and family accommodation with her home-made soft furnishings. “I bought her a sewing machine for her birthday,” says Sue. “We went to local brocantes and found lots of old material, and she set about making cushions for the living room, as well as tie-backs for the curtains, throw cushions for the beds, and a lovely set of table napkins. Those lovely, individual touches give the place such a homely feel.”

Do you enjoy living in France?

Despite having to improve their own living quarters, the family have settled into life in France and their numbers have swelled: “We’ve got a herd of Cameroon sheep now – our tondeuses naturelles – as well as chickens and a dog,” says Sue.

As well as continuing with work on the building, Tim, a classically trained chef, and Krys now run the family business, with Tim producing impressive five-course evening meals twice a week for up to 15 guests.

Now that the majority of work has been completed, Sue and Robert have taken a back seat and are enjoying retirement, alongside the more minor renovation of their ‘hovel’. “I’m the granny living across from the château and available for babysitting,” laughs Sue. “But it’s Krys and Tim’s business; they’re in charge of its day-to-day running. We enjoy hosting dinner parties, and often pop over to the château to eat with the guests. I’m enjoying a quieter pace of life now – after all, this is our retirement!”

Of course, for Mike, the move hasn’t been a straightforward one. “My biggest regret is that he had to leave some of the clubs he used to go to in the UK,” explains Sue. “He had a few friends there, which is unusual for people with autism, so it was a shame to leave them behind.” However, there have been lots of advantages for Mike in their new location. “He helps out a lot at home, and really enjoys looking after the animals,” says Sue. “We had a small garden in the UK, and we’d never have had the animals we do here in our 2.6-hectare plot. People with autism often respond well to animals, so it’s been a real blessing for Mike.”

With Krys and Tim working hard to create a successful business, this family venture has also provided Mike with a secure future and the ‘forever home’ Sue and Robert had hoped for.

“It’s just such a wonderful life here,” says Sue. “We’re so glad we are able to share it with our family.”

5 tips for renovating a property in France

Previous Article 9 financial questions you need to ask before buying a French property
Next Article Can I get high-speed internet in France?