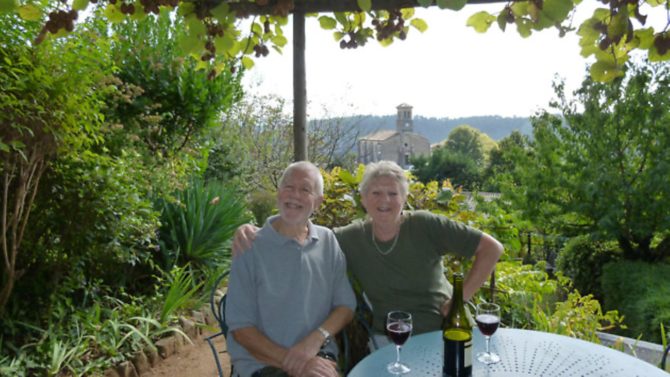 Jan Bevan inherited her parents’ house in Ardèche in Rhône-Alpes and moved to France 20 years ago. Along with her partner Mike, she has worked hard to transform the garden.

What was the garden like when you first arrived?

When my parents, Peggy and Alan Anderson, bought the house in 1963, the garden was covered with brambles. When they were cut back, sandstone walls retaining four levels of land up the mountain behind the house were revealed.

How have you developed it?

The garden terraces are now linked with steps, paths and ramps built and cobbled by Mike. the first level is a gravelled courtyard edged with beds, the second is an orchard and a vegetable patch and herb garden, the third has more shrubs and flowerbeds and the fourth is grassed. We’re outdoors so much that there are living spaces everywhere: seating in the sun and shade, hammocks under trees, a dining area pergola overed by kiwi vines. Gardening has become one of my passions and with Mike’s help with landscaping and my addiction to planting, we have created an extremely pleasant space to relax in.

What grows well in your area of France?

The summers are very dry so anything that doesn’t need much water is good! Cacti and succulents do well, as do yuccas and agaves. the soil is sandy and flowers pass over quickly, so itend to go for grasses and gauras, plus phormiums, cordalines, bamboos, perennial shrubs with silvery, variegated and bronze-red foliage. nearly all of them are bird, bee and butterfly-friendly. It’s difficult to name just a few of the shrubs – it’s a large garden and i’m a plant addict! We have everything from abelia, buddleia through to viburnum, weigela and numerous yuccas, as well as geraniums, irises and lavender, alongside herbs like thyme, rosemary and oregano, and trees such as palm, eucalyptus, mimosa and olive which all grow well here.

What tips would you give to someone with a garden in your area?

Let most of the garden do its own thing and just control with weeding, mowing and pruning.

What do you enjoy most about your garden?

The fact that we spend so much time in it! We’re often there from breakfast to supper in the summer. the climate is so good that we even have our Christmas brunch on the terrace. I really enjoy pruning and often crop shrubs into shapes – topiary can be a lot of fun.

Previous Article Escape to France with Lagrange Holidays
Next Article Location spotlight: a trio of towns near St-Tropez