Location spotlight: a trio of towns near St-Tropez 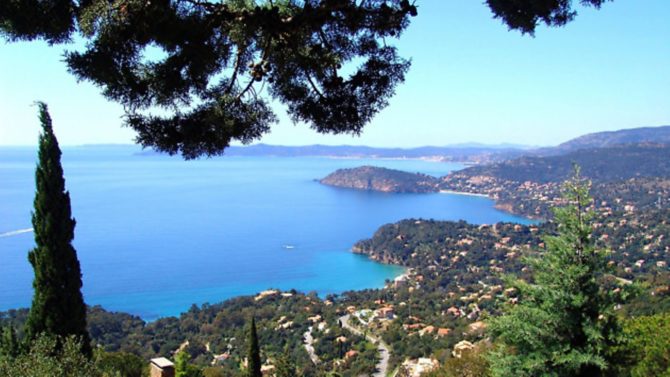 In search of history-laden towns and modern property, Carolyn Reynier explores a triangle of Provence 25km west of the popular coastal resort of St-Tropez

It’s three for the price of one this month as we head south to Var, the only French department whose river does not run through it. The river has not changed course, but the boundaries between Var and Alpes-Maritimes have. I want to tell you a little about the property markets in the neighbouring communes of Cavalaire-sur-Mer and Rayol-Canadel-sur-Mer along the lovely Corniche des Maures, and La Môle in the heart of the verdant Massif des Maures. These three communes, situated in the western sector, are part of the 12 that make up the Communauté du Golfe de St-Tropez.

This was hotelier Conrad Hilton’s advice when asked about the most important elements in choosing hotel sites, and it was also valid for earlier property developers. Ligurians settled in Cavalaire-sur-Mer 800 years ago, building their fortress on the Montjean heights dominating the bay; the Count of Provence built a lookout tower on Cap Cavalaire, to which the Grimaud counts added fortifications destroyed in 1646, and 300 years later, in August 1944, its strategic location made Cavalaire the allies’ choice for landing their third infantry division.

Flavien Grandmaire of Agence de Cavalaire identifies four different property sectors of the commune – the seafront, the town centre, the area within 400-800m of the centre, and higher up, a couple of kilometres from the centre and the beaches. Along the seafront and just behind – Les Myrtes west of the cap, and Le Parc de Cavalaire east of the marina, for example – you find primarily residential apartment buildings with prices around €6,000-€7,000/m2. Villas in the same price range at La Vigie and Le Cap, on the cap itself, date back to the 1950s and 60s; they are not necessarily luxurious, but usually come with attractive amounts of land and lovely views of the bay on one side and the islands on the other, says Grandmaire. The third sector on the cap is Super Cavalaire next to the calanques, those rocky inlets you find all along this coastline. Given its exceptional location, prices here can go as high as €3m.

If you think you might buy an older villa, demolish it and build something bigger, think again. Land pressure on these small littoral communes is great and the recently adopted plan local d’urbanisme is designed to slow down building development. In sectors like La Vigie and Le Cap, the average constructability has plummeted from 20% to 7%. This means that where previously, on a plot of 1,000m2, you could build 200m2, you can now only build 70m2.

There is no centre historique in Cavalaire-sur-Mer; town-centre accommodation is in apartments which sell for circa €5,000/m2. With the arrival of a new mayor in last year’s municipal elections, the Canissons project planned for a four-hectare site on the periphery of the town centre is now on hold. It would provide 100 units of social housing for renters and first-time buyers plus a hotel, pool and various leisure and sporting facilities.

Move inland and upwards and you come to other residential areas like Eau Blanche and La Roseraie offering properties of 160-180m2, often with pools, 1,000m2 of land and lovely sea views. Prices, depending on location and the quality of the fixtures and fittings, range from around €600,000 up to €1m. Here you will be around 2-4km from the town centre and so will need a car.

Over 70% of clients – primarily French – are buying second homes, so there is a seasonal element to Cavalaire-sur-Mer. The busiest months are from April to October and second home owners, often retired folk, stay for several months. That said, there are still around 7,000 people (known as Cavalairois) living here year round. “Shops are open; it’s very pleasant, especially when the weather’s fine like today,” says Grandmaire.

We now head away from the coast to La Môle. Covering over 45,000 hectares, it lies at the edge of the Dom Forest in the heart of the Massif des Maures. To the north the peaks of Teissonnières (329m), Avelan (334m) and Ste-Magdeleine (285m) form part of a compact and wooded massif, and the narrow Verne valley below widens out into an alluvial plain oriented east-west and just 500m wide.

A monastery, the Chartreuse de la Verne, was founded nearby in 1174. More recently the Verne has been dammed and supplies drinking water to inhabitants of the Pays des Maures and around the St-Tropez gulf, and the reservoir – no bathing or fishing here – has become a haven for aquatic wildlife. You can also walk, ride or bike along country paths around the dam.

The late 19th-century village church has a typical Provençal steeple – a clocheton – and the war memorial was built in serpentine, the local green stone. Since the 1980s, the population has increased significantly (244 in 1800, 980 in 2011) with the construction of the nearby Moulin Roux housing estate, and the village itself has been substantially enlarged with the opening of the Clos des Vignes, the Ste-Magdeleine estate and the St-Exupéry small business park.

In his childhood, Antoine de St-Exupéry, the author of Le Petit Prince, said to be the most-read book in the French language, spent holidays with his grandparents near the ancient Provençal château, a kilometre from La Môle. If, like him, you are an aviator, you can fly into the local aerodrome.

Small terraced houses in the old village, with or without gardens and possibly in need of some renovation, sell from €300,000, says Lucie Borges of Anaïs Immobilier. Modern developments with a swimming pool, like the Clos des Vignes, are ensembles of buildings made up of small terraced houses for which you will pay around €330,000; a detached property should cost less than €400,000. Apartments in small, low buildings, sell for around €225,000 for around 60-65m2. If you want something brand spanking new, the final phase of construction at Les Hautes Terres domain is currently in progress.

Prices here are lower than in Cogolin to the east, also inland, because La Môle is more off the beaten track. The village is popular with British buyers and there are a fair number of second homes. It operates year round – there is a small superette – although you do need to go to Cogolin for main shops and services. La Môle offers affordable prices in an unspoilt natural environment yet still close to the sea.

A coastline in bloom

We return to the Mediterranean for a look at the final destination in our triangle. Backed by the Massif des Maures, Rayol-Canadel-sur-Mer lies along the Corniche des Maures facing the sea and the Hyères islands. The inaccessible coastline here remained virtually uninhabitable until the arrival of the railway in the 1880s, followed quickly by the first tourists. Created in 1925 from an extension of the commune of La Môle, Rayol-Canadel gained its independence in 1949.

The coastline is rocky and jagged with promontories, remarkable sea depths, bays and beaches of fine sand (in 2013 the commune was awarded the eco-label Pavillon Bleu for four of its beaches). Thanks to the microclimate, winters are mild. From January onwards hillsides turn yellow as different varieties of mimosa bloom, all of which would have been appreciated by the English engineeer and car designer Sir Henry Royce, who wintered here from 1911 to 1931 in one of four villas built for himself and his closest work colleagues. Now that’s what I call looking after key staff. A commemorative plaque describes him as a mécanicien, which seems to me an understatement to say the least.

A major attraction is Domaine du Rayol, a splendid botanical garden, says Philippe Simon at Agence Goy. He explains that Rayol-Canadel is very much a family destination with a residential property market primarily of holiday villas.

The botanical garden gives the commune a country feel, and small apartment complexes are well integrated into the environment. There are just two large residences, one a former hotel converted into apartments.

The commune comprises three sectors: a quarter of Pramousquier (the rest belonging to Le Lavandou), Le Canadel and Le Rayol. Seaside villas, pieds dans l’eau, sell for several million euros wherever they are located. These tend to be older properties because they were the first houses to be built here, close to the water, from 1925 on. Larger, more modern homes were constructed later on hillside parcels of land but, proportionally speaking, seaside houses are more expensive.

“On the hillsides everything depends on the view,” says Simon. Prices range from €800,000 to €1.2m for, say, a small house requiring some work but with sea views. “Obviously a lovely house with a pool can be €1.5m.”

Although the year-round population is 600, 95% of property comprises second homes that increase numbers tenfold during high season. Property prices are possibly slightly higher in Le Rayol because it is a village with shops. Although advertised sale prices have not registered a decrease, people serious about selling usually accept offers. “It’s during negotiation that prices fall,” continues Simon, who remarks that prices have dropped around 20% since summer 2013. “A house that was on the market at €1m 18 months ago would be more likely to sell now for €800,000.”

This is a family destination par excellence, close to the water in a tranquil, natural country setting – la plage et la campagne – but there are no campsites and few shops and restaurants. It is a natural, unspoilt wilderness. And that is what Simon is selling. Clients – French and other northern Europeans as well as a few more British now – may want to walk to the beach or perhaps prefer hillside panoramas. Houses are often not particularly attractive, but it is all about their location and sea views, and renovation can be done afterwards. The beautiful environment is what is important.

I do hope this look at property on the littoral and in the hinterland will inspire you to visit the Corniche and Massif des Maures – there is so much more to it than meets the eye.