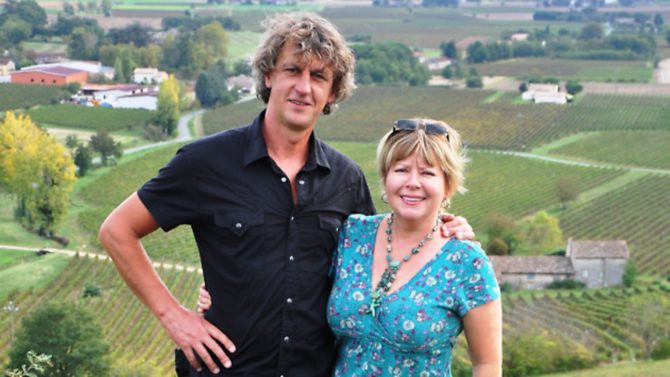 Irena-Marie Makowska and Rod Capps decided to move from the UK to rural Tarn in south-west France eight years ago and set up a hypnotherapy and well-being retreat. Emma Rawle finds out more

Eight years ago, Irena-Marie Makowska and Rod Capps were both living in Brighton and running their own PR business. Now they live a world away in rural Tarn and run a well-being retreat, Focus Hypnotherapy France, from their beautiful 19th-century maison de maître, La Blanque. It is the realisation of a long-held dream that has been 20 years in the making.

Moving to France had been the plan for a long time. South African-born Irena-Marie and Rod, who is British, had spent two years searching for a house across the Channel without much luck. “One day we woke up and we were fed up, so we said let’s just go and rent in France and see what we think,” remembers Irena-Marie. “Rod put a finger on the map and said we are going to go here, and that’s what we did. As our business could be run almost anywhere, it wasn’t a problem to spend a few months renting in France.”

South-west France cast its spell on the couple and within three months they discovered their dream home, not far from where Rod’s finger landed on the map, in the Tarn department. “On the last day before our three-month rental was up, we found a house and we ended up arranging to put our property in the UK on the market,” says Irena-Marie. “Before it was even on the market it sold and within weeks we were back here. It was all a bit unplanned.”

Their dream house turned out to be in rural Tarn, nestled in the foothills of the vineyards of Gaillac and not far from Cordes-sur-Ciel, one of Les Plus Beaux Villages de France, which couldn’t be much further from their original idea of a well-connected town house where they could continue their PR business. But their hearts won out when they set eyes on the property, and they just couldn’t resist. “When we arrived, I just fell in love with the house straight away,” says Irena-Marie. “The building is very beautiful from the outside. It just felt right, so we took a risk.”

The original plan was to continue with their PR business in France, as it was entirely run via the internet and telephone, but that proved more difficult than they imagined in rural Tarn. “When we came here, we didn’t have the internet even though we agreed that we wouldn’t buy the house unless it had internet; it was in the original contract. We only found out when we were actually signing the contract,” remembers Irena-Marie. “For three years we struggled without internet, going to McDonald’s, believe it or not. That was very, very stressful and didn’t help the business at all.”

Through all this, Irena-Marie cherished her dream of building a retreat, but, as is often the case, life took over and her plans were put on the backburner until a life-changing event made her realise that life’s too short not to pursue your dreams. “About 15 years ago, I was starting to look at hypnotherapy and do creative visualisation in South Africa,” explains Irena-Marie, who grew up in Johannesburg. “It was something I always wanted to do, but I didn’t want to take the risk of giving up a business that was making money to pursue this. But then three years ago, my mum died and I just thought sooner or later, you’ve got to do what you want to do. I really didn’t enjoy my job; it was very stressful with constant deadlines. It just wasn’t me any more.

“A friend, who used to live here in France but had moved back to Wales, asked me one day if I fancied doing this hypnotherapy course. It wasn’t planned, it just sort of happened. It was almost meant to be. It was always what I’d wanted, I just didn’t have the guts to do it. So I travelled to Wales once a month for about a year and went through retraining to become a clinical hypnotherapist.”

And that was just the beginning. Once Irena-Marie had become a qualified clinical hypnotherapist, she set about taking on private clients and building up a reputation, while Rod got on with updating the house and building a swimming pool, and, finally, in the summer of 2013, the couple realised their dream and opened a well-being retreat in rural France.

With only four bedrooms, the retreat is intimate, which allows Irena-Marie to get to know her clients and tailor the programme to their needs, whether they are simply coming for a week of relaxation in the south-west of France, complete with facials, massages, aromatherapy, reflexology and visits to local markets, or for some intensive one-to-one hypnotherapy to conquer depression, quit smoking or tackle weight loss. During the etreats, Rod works as chef, chauffeur, tour guide, and any other role that arises; generally making the retreat run like clockwork.

Running the retreat has many rewards. “We had a lady who was suffering from post-traumatic stress disorder. She was in New York during 9/11 and she lost friends and family. She was meant to be in one of the towers at the time but got held up,” says Irena-Marie. “She came here for five days and it was brilliant and very rewarding to see her going back happier and full of energy and feeling much better.

“It’s a very healing environment. You’ve got the vineyards around you and a tractor goes around every now and again. There’s no light pollution and at night you can just see millions and millions of stars. It’s a very peaceful place.”

It’s clear that Irena-Marie and Rod are now thoroughly enjoying their new life in rural Tarn, but it has taken a lot of hard work to get to this stage, both in a personal and professional capacity.

The couple’s first challenge was setting up a business in France, with their very limited French making it even more difficult to navigate the infamous French bureaucracy. “We didn’t speak any French when we moved here and that was a big mistake,” says Irena-Marie. “You need to have a decent amount of French to set up a business otherwise you’re relying on French friends. That’s fine in the beginning but then they start to get a bit annoyed with you.

“It’s a big mistake a lot of people make. They come here and they think they will just learn French, but then 10 or 15 years later they still haven’t. You can survive here knowing only limited French and get all the things you need to get done, but in-depth conversations are quite another thing.”

The couple have also learnt from their experience of setting up a business, as they are registered as auto-entrepreneurs. This allows Irena-Marie to work as a clinical hypnotherapist using the qualifications she gained in the UK without having to complete further courses in France. She recommends doing your research before setting up your business and getting as much advice as possible.

“There are a lot of English-speaking forums here, which are really helpful,” she advises. “There’s the Toulouse Women’s International Group which is very big. There’s TAG online, which is a group of expats online: English, Dutch, and Americans. There is a lot of support in different forums here. You can ask people’s advice. The French are also brilliant as well. As long as you’re open, they are too.”

“We were quite lucky. My French friend is an auto-entrepreneur and that’s how we learnt about it. It wasn’t that difficult to do. You can go online and you can declare what you are going to be. There are lots of options. For most of the tax systems here, you have to declare what you think you are going to earn before you set up the business, and that is what they charge you. As an auto-entrepreneur, they will only tax you on what you have earned, after you have earned it – that’s the difference – but you can only earn up to a certain amount.”

Having completed their first year of the retreat, Irena-Marie and Rod have time to reflect on their new life, and despite all the hard work, they wouldn’t change a thing. “We came over with a rose-tinted view and, although it hasn’t gone wrong, it’s been hard. But even though it’s been difficult, his is the most beautiful place in the world. It feels like home for me. It sounds a bit twee, but we wouldn’t change the experience. You sit outside and watch the sun go down, and think how lucky you are.”

www.focus-hypnotherapy.comwww.irena-mariemakowska.comRead about the couple running a gîte business in rural ProvenceFind out more about the auto-entrepreneur scheme in France

Previous Article WIN! a copy of My Old Lady on DVD
Next Article March 2015 issue of French Property News out now!