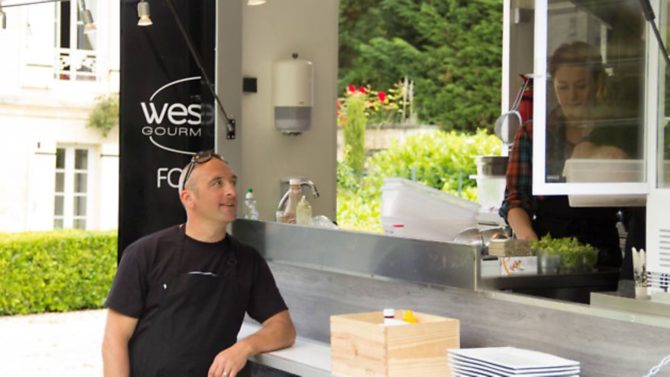 It might seem the most unlikely import: bringing burgers to the French – and in particular to the fastidious inhabitants of beautiful Bordeaux. Ben Lethbridge has not only done that, but he has also built a thriving business from his rather British line in beef and buns.

“I must admit, the French were a little sceptical at first,” says 47-year-old Ben, the proud owner of not only West Coast Burgers restaurant in Bordeaux, but also a travelling burger food truck supplying festivals and events all over the south-west of France.

“They equated burgers with McDonald’s and they hate fast food. But they love their meat, and I thought, if they tried a really good-quality, lovingly produced, home-made burger like ours, they’d love it. And they did! Reaction has been really good. They are surprised when they taste a great burger with all the home-made dishes we serve with them, and the restaurant has taken off.”

Ben’s gamble has meant a new life for his fashion-designer wife Laura and three sons, 12-year-old Felix, 10-year-old Joe, and seven-year-old Zac, who now live in a four-bedroom country house in a tiny village called Moulon, near Saint-Émilion, some 20 miles from the restaurant in Bordeaux city centre.

“It’s a great life for the children here,” says Ben. “They love the village and have lots of friends. At weekends and during the holidays, we tend to go swimming and surfing on the coast which is close by.”

It’s all a long way from another south-west: Twickenham, in south-west London, where Ben was born and grew up. After leaving school and deciding university wasn’t for him, Ben wasn’t sure exactly what to do, so he went travelling to Australia and Israel.

“I ended up in Paris when I was 19, because my then girlfriend Laura Cawte, now my wife, worked in fashion and was working there,” says Ben. “I didn’t know what to do work-wise as I had no real skills, but as soon as I arrived, I heard about a man who ran a bar and wanted an English barman to work there.

“It turned out that it was a very tough, working-class French bar, open from 6am to 4am, with a mad owner, who just liked the idea of having an Englishman, who didn’t speak a word of French. He thought it was hilarious. I went from knowing no French to speaking it pretty well in three weeks, including all the bar slang, because I had to!”

Ben eventually opened his own bar in Paris called Zero Zero, which he later sold before going on to open a restaurant in the city called Café Rosso.

“Laura and I got married in Paris, which was lovely, and then we had our three children, so we decided it was time move out of the centre to the Paris suburbs into a little house there. But it didn’t really suit us. Paris is great but some of the suburbs are not so good and we thought: we left London for this?”

Their heads had already been turned on visits to south-west France and gradually the lure of the surfing, the wine, the culture and the city of Bordeaux, which they loved, got them thinking about a move south.

“Bordeaux seemed to have everything,” says Ben. “Then one day, we were looking around and we happened to spot a restaurant for sale that was in a fantastic position on the waterfront. I said to Laura ‘why don’t we give it a go?’ So we took the plunge, sold the Paris restaurant, and bought it.”

Ben and his family left Paris and moved to a little flat in Bordeaux in 2007. “It was quite a contrast, moving from a big bustling city like Paris, which has a population of about two and quarter million, to a small one like Bordeaux, which has about 250,000 people,” says Ben. “We worked like mad, turned the restaurant around, restyling it and finally got it working again.”

Ben made a success of the new business and the family settled into the Bordeaux area. But he still had an unresolved ambition.

“All this time, going way back to Paris, I had been longing to open a burger restaurant,” he recalls. “I love burgers; good ones, made with top quality beef. I had travelled round the world enjoying them, but I couldn’t find them in France. Bordeaux seemed to need a specialist burger restaurant. Now, good-quality burger restaurants are very fashionable in London, and other cities, and you see them everywhere, but in Bordeaux, I could not get a burger that I really liked.”

Ben decided to do it himself. He found a little place in Rue du Cancera, in the centre of old Bordeaux, which he thought was ideal for a restaurant, started selling quality but affordable burgers, and West Coast Burgers was born.

“It was a gamble, and the French had misgivings at first, but after they tasted our burgers and side dishes, they soon came round. We found that the reaction was good, and word spread,” says Ben.

No wonder. Ben and his team use only premium products. All the burgers, side dishes, sauces, desserts, chips, onion rings and coleslaw are home-made. The burgers are made with 100% French Limousin beef and come with a variety of toppings such as avocado, mozzarella, guacamole and pesto, while deserts include home-made lemon cheesecake and brownies. With wine at just three euros for a large glass of sublime locally produced Bordeaux, it’s no surprise business is booming.

“I have a restaurant truck too,” says Ben. “We use it to supply the food for events like weddings on the beach, festivals, and all sort of events for every age. We are usually the most popular food outlet, and we now take it all over the region to a different venue every day.”

Life in France is clearly good for Ben and his family in their new adopted home.

“We started in Bordeaux with the flat, but as we have children, we wanted a garden,” Ben says. “We decided to take the risk and move out of the city, in 2010, after we saw a property in this very tiny rural village away from the main city. It was a big change for us. We were city people and had never lived in the country, but we love it and have now been very happy here for four years.”

The house is old, has four bedrooms, a large garden and is right in the centre of Moulon, which has a village shop, and a butcher’s; and the school, which Ben and Laura’s boys go to, is nearby.

“Life is great for us and the children. They have so much freedom and love biking around to see their friends in the village,” Ben says. “They are bilingual, of course, and have done well at school. It’s wonderful that they have been able to walk to school, and when we aren’t working, we can come home and have lunch with them.

“We are all into surfing so that’s what we do at weekends. The kids are better at it than me now. We often pile into the car and head to the coast, which is about 45 minutes away. There’s rarely day a when you can’t find somewhere to surf and they have competitions too. Until recently we had a caravan by the beach so we could stay longer, but we’ve just sold it because the children are getting older and now often have commitments with their friends. We’re all much more outdoor-orientated now. Supper is usually outside under the trees, which is lovely.

“We also have two family dogs: cross pointer-labradors, a brother and sister called Fred and Coco, who go everywhere with us. Laura is doing some fashion work, and she helps us in the restaurant too. It’s a real family business. We have lots of friends, mostly French, but because this is wine country, there are some English families here too, which is nice. We go to the UK twice a year now, if that, and it’s nice to go back, but I can’t say I miss it.”

All in all, Ben and Laura are hoping that the French continue to have a good appetite for delicious home-made burgers for many years to come.

www.westcoastburgers.frThinking of setting up a business in France but not sure what? Read about James Dealtry who runs an activity holiday business in the Pyrenees and the expat couple who run a hotel in Burgundy