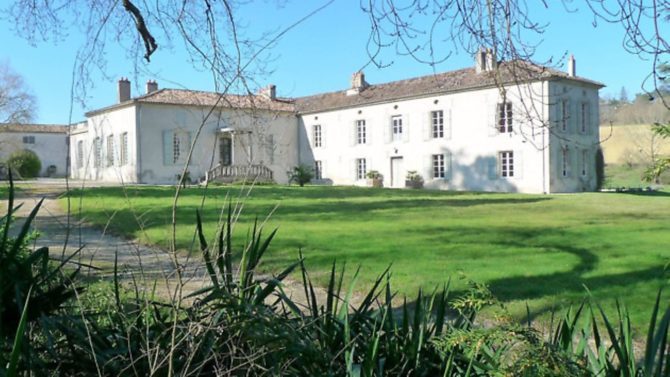 One whisper of chartreuse and most people would think of a lurid-green herbal liqueur, but the name also refers to a far more attractive proposition: a house in the Gascon countryside. This fine example outside Nérac, on the borders of Lot-et-Garonne and Gers, dates from the 18th century and has been rescued from ruin by its owners of 15 years.

According to historical archives, the site of the house has been occupied since the 15th century and several large, influential families have lived on it. Having previously remained in the same family for 100 years, present owners the Chabauds bought the property in 1999 and have carried out a vast amount of work under their ownership, including the restoration of the roof, rewiring and the installation of a new heating system.

The interior renovations have been completed in line with the property’s heritage, carefully preserving all its period features. The entrance hall contains original terracotta floor tiles and elegant moulding and panelling, and there is a plethora of magnificent old cupboards. Spanning more than 900m2 across two wings that are set in an L-shape, all the rooms are bathed in natural light thanks to the large 18th-century windows, and each has its own fireplace.

Among the most impressive decorative elements are the 19th-century murals in the oval dining room, similar to those in the Château de Malmaison near Paris, the residence of Napoleon’s first wife Joséphine de Beauharnais. Silhouettes of lifesize muses and allegories of the seasons encircle the space and trompe l’oeil marble panels cleverly conceal cupboards. Also here is an original marble water cooler, its inlet system still in working order, and the main living room features unusual wainscoting, stucco cornices and old, cast-iron radiators with floral design.

The property’s eight bedrooms are situated in the older wing and with almost all having their own bathroom or dressing room, guests are luxuriously accommodated. This wing contrasts the other with its rustic, stone-led decoration – the kitchen features a wonderful half-timbered cob wall – but does little to dampen the house’s overall grandeur. The house was even once the prized hunting lodge of Henry IV and the fountain in the grounds, fed by a private source, dates from his time.

If outbuildings are a must, this property offers them in abundance: an aviary, workshop, wine store, stable and large garage all nestle around the main house, approached via two long, shady driveways. An 85m2 caretaker’s cottage has been converted to include two bedrooms and, since it is entirely independent with a direct entrance from the lane and a private garden, it could be extended to provide further accommodation.

The boundary wall enclosing the grounds has also been restored by the present owners, an enormous undertaking given its one- kilometre length, and the vast 17x5m swimming pool provides refreshing respite from the summer heat.

Typically a country house set in its considerable land, a chartreuse can be somewhat isolated. Land-wise, this one is no exception to the rule, with 44 hectares of parkland, two lakes and rare trees several centuries old, including Siberian elms and cedars of Lebanon. Peace and privacy certainly reign supreme and neighbouring life can only be glimpsed from the end of the lake, a long distance from the house itself.

But this is a house that offers the best of both worlds; the town of Nérac, just 2km away, is an antidote to any sense of isolation and vastly improves the quality of day-to-day life. Its proximity means the house is connected to mains gas, children can go to school by bike, and the shops and Saturday farmers’ market are within easy reach for all essentials.

Like the house, Nérac itself is a hub of history, once home to Henry IV’s mother Jeanne d’Albret. Straddling the River Baïse, its cluster of medieval brown-roofed buildings is dominated by the château, classified as a monument historique and whose museum houses archeological finds and attracts the most visitors to the town.

Locals and tourists alike enjoy whiling away the hours at the numerous cafés and restaurants, or walking through the pretty Parc de la Garenne, once a royal hunting ground. For sporty types, an 18-hole golf course and renowned riding centre hosting international horse shows are both 6km away, and further afield are the important riverside towns of Mont-de-Marsan and Auch.

Nérac is served by a choice of airports, with Bergerac and Toulouse both serving the UK and accessible by car in under 90 minutes. The nearest airport is at Agen – less than 20km away – offering flights to Paris, but if you prefer to enjoy the countryside en-route, a new TGV service will connect Agen with the capital in just three hours by 2017.

The Chabauds’ search for a smaller property now forces the sale, at a price of €1,250,000. Avid history lovers in search of sunshine: look no further.