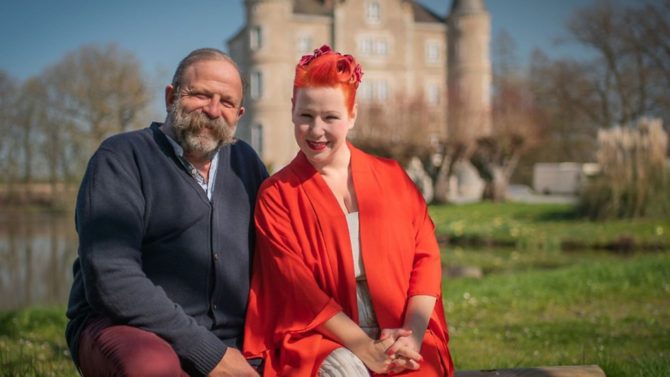 With six series of Escape to the Château drawing in millions of viewers, the Strawbridge family’s quest to renovate a run-down château in Mayenne has been followed intently every step of the way.

The creative and inventive couple are currently on a tour of the UK with their live show Dick & Angel Dare to Do It! revealing what inspired them to make the move to France and also shedding light on some of the myths their hear most often.

These have included that Channel 4 paid for their château; they managed to restore it for just £20,000; they don’t really live at the château and that Dick loves DIY. All not true apparently.

“DIY to me is a necessary evil, I would rather go fishing,” admitted Dick to an enraptured audience in Cheltenham. “But when money is tight, you don’t have a choice.”

They were also keen to dispel rumours they charge over the odds for their events, including weddings, because of their TV profile.

They conceded they are not yet multi-millionaires, as some believe, and everything in the château they have bought because they loved or needed it – there are no commercial product placements.

“If we can’t afford it, we can’t buy it,” said Angel simply. “We have got to have integrity, we are a family business.”

As part of the live show, the couple looked back on their happy childhoods with projections of family photos and reflected on what led them to meet and eventually decide to buy a dilapidated château in Martigné-sur-Mayenne.

Dick, one of seven children, was born in 1959 in Burma before the family returned to Northern Ireland. He went to Sandhurst, becoming a Major in the Army and was awarded an MBE for his distinguished service.

He was still a Colonel in the Army when he went for an audition for TV game show Scrapheap Challenge in 1999. After working as a trouble-shooter and programme manager for a time, he decided to leave his job to become a TV presenter full-time and went on to appear in a number of shows including Junkyard Megawars and Crafty Tricks of War. Dick also starred on MasterChef in 2010 where he reached the final, with one celebrity chef describing his sauce as good enough for three Michelin stars.

“That’s the only bit of telly I’ve done that Angel has watched,” Dick laughed.

Angel meanwhile was born in 1978 in Essex and started collecting second-hand items from charity shops while growing up. She moved to East London and a flat in Bethnal Green where she launched the Angel-A Vintage Experience, selling to friends, which she did for seven years. By day she was also an accountant for a record shop and fashion house to generate extra income.

Looking to launch something new, she had an idea for a Vintage Patisserie hosting breakfast, afternoon and evening tea parties and went on to host them for clients including fashion designer Zandra Rhodes. Angel also appeared on Dragons’ Den 10 years ago and was offered £50,000 from both Deborah Meaden and Theo Paphitis for her Vintage Patisserie concept store, but didn’t accept the investment in the end.

It was following this appearance, when Angel was signed to the same television agent as Dick, they ended up meeting at one of his pop-up restaurants and falling for each other. Their first holiday together was in a gîte in the south of France, a moment which Angel said “changed their lives”. When they returned home to Southend-on-Sea, they started searching in earnest for French properties to buy.

“Once the genie is out of the bottle it doesn’t go back in,” said Dick. “We thought ‘we can do this’ – we don’t know how we are going to, but we had made the decision.”

It took them three and a half years to find beautiful 18th-century Château de la Motte Husson in Pays de la Loire, by which time baby Arthur and Dorothy had arrived. The new parents both thought the idea of a young family moving to France to renovate a château would make an interesting TV show.

With a camera crew by their side, they first opened the doors to their new home five years ago. Since then, watched by millions, they have transformed the interior of the château including the impressive reception room, salon, four elegant guest suites and a children’s play room, as well as separate accommodation for Angel’s parents, the walled garden and a glamping site.

They are still constantly investing, with new projects to tackle all the time and revealed their latest addition to the family is a puppy called Pétale.

“It is everything we dreamt of, we are happy and feel so lucky,” said Dick.

A new series of Escape to the Château: DIY starts on Channel 4 on 23 March at 4pm.

Escape to the Château:DIY captures ups and downs of life in a medieval French château

Escape to the Château:DIY returns to colourful Château de Lalande

Previous Article 36 French acronyms and initialisms explained
Next Article Escape to the Chateau: DIY checks into a boutique hotel in the south of France