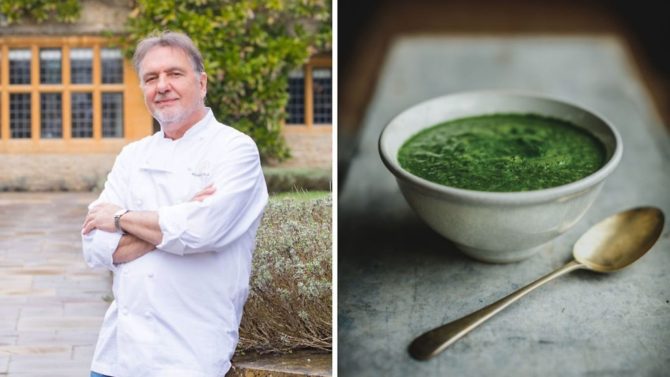 Pep up your lunch with this simple, fresh soup from Raymond Blanc

“I was taught this dish by my mother,” says French chef Raymond Blanc.

“Maman never used stock for soups, she followed her belief that the main ingredients should provide enough flavour, so this recipe is no exception to that rule.

“Today, the gardeners grow watercress at Belmond Le Manoir aux Quat’Saisons in polytunnels to provide the kitchen and The Raymond Blanc Cookery School with the freshest ingredients.

“This simple soup brings out all the qualities of watercress; fresh, tangy and peppery. It can be made one day in advance, but it is always better when it is made just before serving.”

Raymond says: “As a good Frenchman, I would be tempted to add a clove of pureed garlic or flakes of toasted garlic to the soup.

According to the variety, the watercress may vary in its strength of flavour. If your watercress is very peppery, cut off the entire stalk, but if it is mild, keep some of the stalk.

The boiling water speeds up the making of the soup and retains the colour and flavour of the watercress.

The ice stops the cooking, which will keep the vivid colour, the flavour and the nutrients. Reheat the soup at the last moment for the same reasons.

All profit from the cookbook will be donated to Maggie’s charity. maggiescookbook.com

Interview: David Lebovitz on the art of cocktail making, Paris’ top watering holes and where to find the city’s best sandwich

Previous Article 36 French acronyms and initialisms explained
Next Article Escape to the Chateau: DIY checks into a boutique hotel in the south of France