Escape to the Chateau: DIY checks into a boutique hotel in the south of France 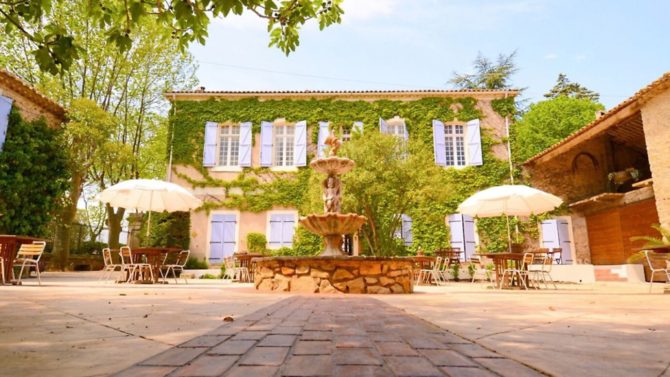 In the latest series, Tim and Sasha Hazael of Château du Puits es Pratx create a wellness garden and prepare for wedding season

Escape to the Chateau:DIY is back for a fourth series visiting Brits running château businesses across France.

The show, which is a spin-off from the hugely popular Escape to the Chateau series starring Dick and Angel Strawbridge, returns to 19th-century Château du Puits es Pratx in Ginestas, Aude. The château, near Narbonne in Occitanie, is owned by Tim and Sasha Hazael who specialise in bespoke weddings for an international clientele.

What were you doing before you decided to move to France?

Working in London; I was a freelance photographer in advertising and had a mews studio in Kensington and Sasha was a couture designer with a showroom in the Kings Road, Chelsea.

What was Château du Puits es Pratx like when you first moved in?

It had originally been built in 1840 as a wine château and became the largest producer of wine in the village. In 1990 wine production stopped and it was sold to a retired arms dealer who lived in Paris and it became his summer residence.

He did nothing to the property over 16 years and it was very neglected when we took it over. All the outbuildings, workmen’s cottages and the very large building that was once where the wine was produced, all required total renovation, including the roofs.

We are on the outer edge of a small rural village and surrounded by vineyards on three sides.

Did you have to create a new restaurant from scratch?

When we bought the château in 2002, we never saw beyond running creative courses. It was not until much later that we saw a way forward to create a restaurant and focus on hosting weddings.

This we did much later in 2008 with two large loans from the bank when we converted the wine barn into a restaurant, commercial kitchen and wedding reception hall. This was done over four months and completed one day before the first wedding group arrived.

Quite apart from the very relaxed and romantic atmosphere that the buildings and vineyard reflect, as a family we are totally dedicated to providing a very personal service, rather than anything formulaic or commercial.

Sasha’s career experience working with high-end weddings in London, along with both our creative and organisational abilities, I like to think, has given us a uniqueness to what we can offer bridal couples.

When did you launch your spa and wellness retreats?

Late 2018 when Channel 4 came to film the installation of the Jacuzzi.

What was it like being filmed for Escape to the Château:DIY?

It was a bit scary at first not knowing how it would come across or be edited, but each time a film crew came down it was all very relaxed and fun.

What are your future plans for the château?

With an enterprise such as this they are many and varied and we are constantly looking at different and interesting ways to improve our guests’ experience. Also, with 23 bedrooms plus all the reception areas and gardens, there is a never-ending list of projects, improvements and decorating to be done.

Escape to the Chateau: DIY is on Channel 4, weekdays at 4pm. Channel4.com

Escape to the Chateau:DIY captures ups and downs of life in a medieval French château

Escape to the Chateau:DIY returns to colourful Château de Lalande

Escape to the Chateau:DIY visits couple who swapped their townhouse for a French château

Previous Article Recipe: Maman Blanc’s Watercress Soup
Next Article How playing the currency market can save you money