Escape to the Chateau: DIY visits couple who swapped their townhouse for a French château 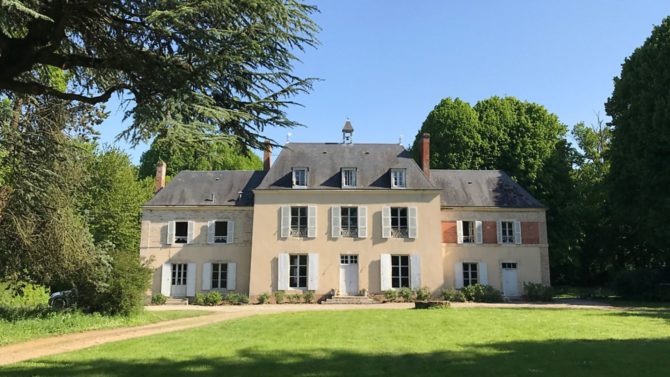 Escape to the Chateau: DIY is back for a second series with Dick and Angel Strawbridge, from Château de la Motte Husson, on hand to offer advice and practical help to new château owners in France.

Rebecca reveals what inspired them to buy a run down château in the heart of the French countryside and what they’ve learned along the way.

Have you always dreamed of living in France?

France was never our plan, moving here was just something that fell into place, like it was somehow meant to be without us really knowing that we were meant to be here. We’d holidayed in France a lot, visiting the Loire, Paris and the south. We always loved it and said how nice it would be to live here, but we never seriously considered it until I saw a re-run of the first series of Escape to the Château on TV.

I started searching online and realised that we could swap our four-bed Victorian townhouse in Stamford, Lincolnshire with its postage stamp garden for a 14-bedroom château with 15 acres of park and woodland.

What attracted you to the Pays de la Loire region?

We fell in love with Château de la Ruche from the very first picture we saw of it and it just happened to be in the Pays de la Loire.

We’re near Le Mans, an area we actually knew quite well because Tim’s mum had lived here for a few years about 10 years ago. So that took some of the uncertainty away from the move. We also knew we wanted to be within easy driving distance to the UK so we could stay in touch with our families and friends, plus the summers are a little cooler here than in the south which suited us better.

What were you doing before you moved?

Tim was a full-time engineer and I was working part-time as a journalist. For a while we had been looking for a new challenge, always asking each other if we were happy to stay working in the same jobs until we retired. The Château gave us both an opportunity to take a leap, to work together and to build something for our family.

What was your first impression of it?

I knew I was in trouble the minute I hit the tree-lined driveway. The Château itself looked a lot more tired and run down than it had in the estate agent’s pictures and the rooms just kept coming, one after the other leaving us feeling very overwhelmed.

But it had such great bones, beautiful windows, original shutters and panelling, tiled floors and a garden full of stunning trees. There was so much potential that we couldn’t walk away.

What condition was the building in when you bought it?

It was liveable (which was important to us because of the children), but very run down. It had semi-functioning electrics and plumbing, but the first winter was very tough. There was no heating and we all pretty much lived in the kitchen which had a very inefficient log burner. We wore a lot of clothes, sleeping in thermals under our pyjamas, with hats on too.

What did you learn from Escape to the Chateau’s Dick and Angel Strawbridge?

Dick and Angel have been so helpful and supportive. Every time we speak to them it gives us a real confidence boost, which when things have been tough has really helped. They’ve always encouraged us to just have a go at something. Our budget is far from limitless so we’ve had to learn to do a lot of things ourselves – from restoring the old windows, to repairing plaster and reupholstering old furniture.

Do you still have much work to do?

We’ve always said that this is a project for life. We have only scratched the surface really and there is still a lot to do. But we aren’t in a hurry and we fully intend that the children will take on the project after us (if they want to of course). I don’t think we’ll ever be finished, but that’s one of the best things about it.

Escape to the Chateau: DIY is on Channel 4, weekdays at 5pm. Catch up with the series so far at channel4.com

See the full interview with the owners of Château de la Ruche in the July issue of French Property News.

Just do it! Why we took on a grand French château in our 30s

Previous Article Icons: The Accordion
Next Article Sun, spas and cycling in Vendée