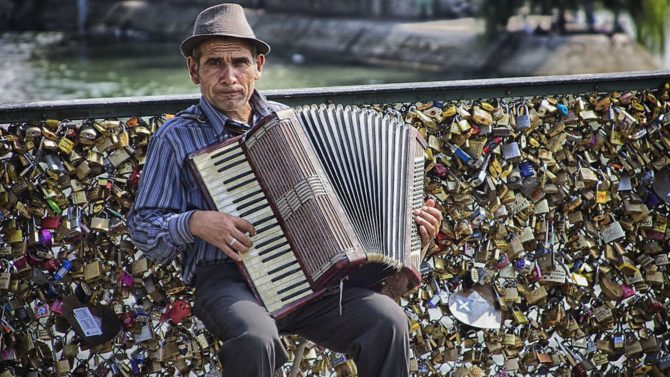 Indelibly associated with notions of smoke-filled French cafés and Parisian dance halls, the accordion, with its lively melodies and underlying melancholy, is the quintessential French icon, even though it was invented in Vienna by piano maker Cyril Demian in the 1820s.

However, the venues where the instrument thrived were very much a French product, having been brought to Paris by musicians from the wild and rugged Auvergne region. The Auvergnats opened wine shops and clubs where they performed the traditional gavotte-style bourrée, accompanied by bagpipes known as the ‘musette’, which gave the halls their name. Open to all social classes, from aristocrats to the criminal underworld, the bal musette had a romantic and raffish charm that contributed to their popular appeal.

By the late 1800s, there were about 150 such dance halls in Paris, and it was around this time that Italian immigrants, including accordion maker Felix Peguri, brought the squeezebox to France. After Peguri set up shop in Rue de Flandre (now the Avenue de Flandre) in the 19th arrondissement, the accordion soon became a popular sight in cafés and cabarets. Felix’s Louis, along with his two older brothers Michel and Charles, rapidly mastered the instrument, with its hand-powered bellows, metal reeds and keys or buttons.

After the turmoil of World War I, Paris was happy to embrace dance halls once more, and in 1919, Louis Peguri was employed as accordionist at a new venue in Rue Pierre-Fontaine. His fame spread rapidly and he was soon accompanying legendary entertainer Mistinguett’s song and dance routine at the Casino de Paris.

As an influx of foreigners brought new sounds such as swing and jazz, accordion players introduced the ‘bal musette populaire’, incorporating the polka, the tango and the sensual, and rather scandalous Java waltz where the man danced with his hands on his partner’s buttocks.

During World War II, the Nazi occupiers initially banned music ‘with a foreign influence’, but when Paris sprang to life again in the late 1940s, the bal musette became the most popular form of dance hall in France, turning its stars into household names.

The performer most closely associated with the bal musette was the ‘little sparrow’ Édith Piaf, who began her career singing in these smoke-filled dance halls, and paid tribute to the musicians in L’Accordéoniste, one of her most popular love songs. Among her accompanists was jazz accordionist Gus Viseur, a member of the Quintette du Hot Club de France, which was founded in 1934 by guitarist Django Reinhardt and violinist Stéphane Grappelli.

By the 1950s the accordion had became the sound of popular France both at home and overseas, thanks to such exponents as André Verchuren. Known in France as ‘King of the Accordion’, he began his long career after winning the world championship in 1936 at the age of just 16. His signature tune, Les Fiancés d’Auvergne, pays tribute to the bal-musette genre. Verchuren, who died in 2013, is quoted as saying, “As soon as I strap on the accordion, I feel like a different, younger man. It’s on stage I feel most alive. That’s what I live for.”

The accolade of ‘Queen of the Accordion’ went to Yvette Horner, who in 1948 became the first woman to win the world championships. Horner, who died in June last year, aged 95, sold 30 million records and is best known for travelling with the Tour de France during the 1950s and early 1960s and playing while strapped to the roof a publicity car.

Although the accordion went out of favour during the 1960s, with the growth of rock and pop, interest in France’s iconic music was revived in the 1990s, with groups such as Les Negresses Vertes and Les Têtes Raides making it cool to enjoy the accordion once more.

The comeback was complete when Breton accordion and piano player Yann Tiersen provided the soundtrack for the romantic comedy Amélie in 2001. The film’s huge international success helped the instrument to reclaim its rightful place as the iconic symbol of chic and charm à la française.

The Musée de l’Accordéon et des Instruments de Musique Populaire auvergne-centrefrance.com in the hamlet of Siran in Cantal is dedicated to the personal collection of three Auvergnat brothers who loved to collect accordions. The national accordion centre in Tulle (tourismecorreze.com) has more than 500 instruments, the largest public collection of free-reed instruments in Europe. Exhibits include Yvette Horner’s dresses designed by Jean-Paul Gaultier for the Bicentenary of the Revolution in 1989.

For a slice of nostalgia, head for Chez Gégène chez-gegene.fr beside the River Marne in Joinville-le-Pont, in the Parisian suburbs, where couples of all ages dance to the sounds of the accordion. A more modern ambience has been created at an open-air bal musette on board the barge Demoiselle in the Bassin de la Villette in Paris. However, the barge’s future is under threat from the city council, so see the péniche’s Facebook page

During the bal-musette dance, men often kept their hats on and women were allowed to ask men to dance.

Previous Article How does the French post office help local communities in France?
Next Article Escape to the Chateau: DIY visits couple who swapped their townhouse for a French château