An American expat in Paris: my ‘paindemic’ experience 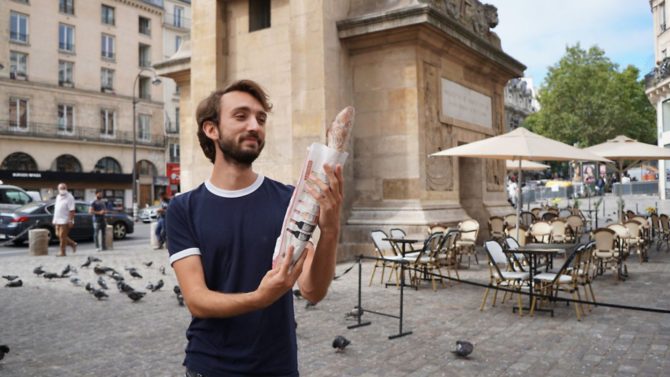 For American actor and writer Alexander Burnett, a shortage of bread at his local boulangerie was one of the biggest challenges of lockdown in his adopted home city

In the era of Covid-19, one thing has remained the same in France: Parisians must have their pain. And after several painful weeks of subsisting on frozen supermarket bread, I figured that I could justify a nip down the street to my local boulangerie for the real deal. After all, I had gone weeks without seeing my favoured bâtard six céréales. So, like any good Parisian in 2020, I donned a mask, signed myself a hall pass, and set out into the wild streets (read: largely deserted and primarily populated by pigeons).

When I arrived at the boulangerie, I joined a socially distanced line that snaked around the corner like an invisible ski rope tow. While such a line might have deterred me in a previous life, now I welcomed the opportunity to stand outside for a few extra moments in the warm afternoon sunlight, which taunted us in our confinement. And besides, I was going to meet the loaf of my life! From the street, I could see that a plastic barrier had been put up in the boulangerie, sealing off the clientele from the employees, with the exception of a narrow opening through which one could exchange a few coins for a delicious treat. The rows of millefeuilles and divorcés winked at me.

However, here is where things started to turn sourdough. I reached the front of the queue and placed my order which needed to be repeated several times, owing to both the mask covering 70% of my face and my not-so-subtle anglophone accent. Once finally understood, I was replied to with an obscenity that I never thought I would hear: “we’re out of bread, monsieur.”

I felt the earth split in two. Accept that a new virus has forced half of the world to stay inside? Fine. Accept that boulangeries have no more bread? This was another paindemic entirely. I let out an internal scream and a single tear rolled cinematically down my face and onto my mask. “You can always order by phone,” the employee told me with a blasé look that betrayed a hint of concern for my mental well-being. I trudged home with no pain but a good deal of pain.

No pain no gain

The next morning, I hesitantly typed the number into my phone. Hesitantly because I tend to get a bit of stage fright speaking on the phone in French and have been known to start inventing words when flustered. I prepared my speech that included the message: “Je veux le bâtard six céréales.” In my rehearsals, I made sure not to leave too much of a pause between bâtard and six céréales so that I wouldn’t give the wrong impression of what I was asking for. As I finished dialing, I felt I had surely joined the ranks of the most elegant figures of Parisian society. There was no denying calling your boulangerie was a power move beyond compare.

The female voice at the other end was fast and efficient, if slightly harried. “Oui, bonjour, je voudrais…” I said, but before I could ask for my bread, the voice was already speaking. “I know exactly who you are, I’ll have it ready for you. 13h, comme d’habitude?” So great was my surprise that I only managed to stammer out a series of “oui”s and one “merci pour le bâtard!” before hanging up. As I sat there stunned, it slowly hit me… my boulangère knows who I am! This was surely a milestone, clear proof of my cultural assimilation, and perhaps even evidence for my residency application.

Learn to bake online with a French chef

I arrived at the boulangerie beaming. As I rolled up to the front counter, I resisted the temptation to announce “c’est moi!” The employee, who was not the charming lady on the phone, greeted me with unamused eyes, telling me that they were out of pain. “J’ai une commande,” I said, flashing an invisible smile. The red leather book was whipped out and plopped onto the counter, sending a small cloud of leftover flour flying into the air and up against the plastic seal dividing us. Her eyes scanned quickly. “We don’t have anything in your name,” she announced definitively. “But …it’s me!” I started. I was practically sweating and resisting a dire need to itch my face. The tension was rising faster than the row of baguettes traditions in the oven and the man behind me was threatening to invade my two-meter bubble in his impatience. “Can you please check again?” I managed to ask. “Sorry, there is nothing. You could always try ordering by phone.”

“That’s what I did! There must be a mistake!” But such was my state of bafflement that none of the words escaped my mouth. “Do you have any bread?” I at last managed to say, my voice cracking melodramatically. The woman met my desperate glance with a hard look, but her eyes softened. Her voice dropped as she said, “Well, we do have something but it is very… deformed.” I watched as she carefully extracted a fresh-looking half-baguette practically glowing in the sunlight hitting it through the plastic shield. A perfect specimen whose only aberration that I could detect was that it had been cut in two at a slightly imperfect angle. She held the rejected creature in her arms, offering it to me tentatively, although hiding it slightly from the growing throng behind me who she clearly presumed would be horrified to see to what low standards the boulangerie had stooped.

I sighed. Just when I thought I had made it as a foreigner, had vaulted an invisible cultural wall, I was knocked back down to the ground. Oh well. “I’ll take it, please,” I said breathlessly. “And please put me down for the bastard bread for next time.” What’s life without a little pain anyway?

Alexander Burnett is an actor and writer currently living in Paris. He is originally from Washington, D.C.

This article was originally published in FRANCE Magazine

Previous Article Competition: Win a holiday for four on the Île de Ré with Sunêlia Vacances
Next Article Bayeux: A quick tour of the French city, cathedral and tapestry