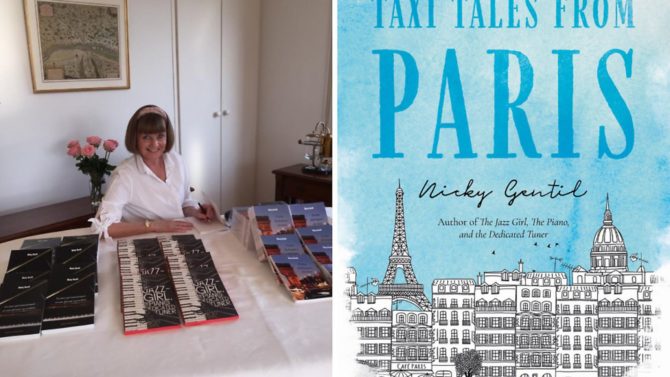 Memorable conversations with taxi drivers in the French capital inspired Nicky Gentil to put pen to paper and write her new book, Taxi Tales from Paris

What prompted your move to Paris?

Many years ago, back in October 1988, having just graduated from Oxford University with a degree in French and German, I moved to Paris to take up my first ‘real’ job working as an in-house translator for a large French company. I went there with a view to staying for two, maybe three, years. However, a year later, I met Etienne – the man who was to become my husband – and consequently never went back to live in the UK. Today we live in Paris’ 16th arrondissement with our two children Sébastien and Tiphaine.

Where did the idea for Taxi Tales from Paris come from?

Although he is blissfully unaware of it, it was actually the American writer Adam Gopnik who inspired me to write this book. To give you the context, back in 2000, Gopnik published a collection of essays – the poetically titled Paris to the Moon – all about life over here. (The New Yorker had commissioned him to write these pieces and to this end had relocated Gopnik and his family for a period of five years.) In one of these essays, Gopnik describes the most unlikely of conversations he and his wife have with a Paris cab driver. I talk about this in detail in the prologue of my book. It is this particular anecdote that had me musing for many years about how conversations with Paris cab drivers could make a great subject for a book but it was a long time before I actually put pen to paper.

How long did it take you to write?

When it came down to it, not very along at all. What happened with Taxi Tales from Paris was that, having mused about the idea for so long, one day the book sort of wrote itself in my head. In the space of two hours, all sorts of memorable taxi experiences started flooding back to me. It really was quite an amazing experience. However, as I still had to finish writing my first book The Jazz-Girl, the Piano, and the Dedicated Tuner, I couldn’t set to work on this new one straight away. Consequently, I made about 20 pages of copious notes that sat in my computer for well over a year. As a result, when it finally came to writing them up, I did so in a matter of a few months.

If you had to choose one memorable taxi ride from the book, which one would it be and why?

This is a tricky one to answer because each and every one of these stories is so evocative for me personally, for many different reasons. However, since you’ve asked me to choose only one, I would go for ‘Another Philosopher’. In this tale, the cab driver actually manages to elevate the (in my view) mundane subject of football to the somewhat noble status of a philosophical reflection on the unpredictable nature of love! Every time I think about this particular exchange I cannot help but smile because, as I see it, only a Frenchman could do that!

What do you most enjoy about living in the French capital?

Where do I begin? So many things… But above all, I think what I like most is the beauty of the city. The architecture is, quite simply, stunning. And I never tire of it. I do a lot of my writing sitting at our kitchen table from where I can see one of my favourite monuments, the Eiffel Tower, or La Grande Dame as the French like to call it. It dominates the landscape of the city and, since it is recognised worldwide as the ultimate symbol of Paris, I find it quite surreal that I can see it from the comfort of my own home! The view changes with the light, regularly providing me with a stunning show that plays out for free before my very eyes. As for the simple pleasures of life, even today – having lived here for over 30 years – I still derive huge pleasure from being able to purchase a hot, crusty, freshly baked baguette early evening, every day, in time for dinner.

Was it easy to settle in?

Despite everything I had been told about life in the French capital, I found it really easy to settle in. In the first story of my book, I talk about how people warned me – before I moved over here – that Parisians have the reputation of being somewhat cold and not particularly welcoming. Fortunately, my experience was the complete opposite and I am indebted to the numerous colleagues who really bent over backwards to help me with the logistics of finding accommodation and moving my things over when I embarked on this adventure.

Did you find anything particularly helpful when you first arrived?

One thing that was naturally very helpful was the fact that I already spoke fluent French. Most French people speak some English but they do not like it if you take that fact for granted. So even if you only have a smattering of French, they prefer you to give it a try. As for the way I speak French, even today, I have still not managed to completely eradicate my English accent. There is even a story on this subject in Taxi Tales from Paris. Fortunately, however, my foreign accent seems to endear me to French people in the same way that we Brits love it when the French speak English with a strong accent.

How has life in Paris changed in the 30 years that you have lived there?

The major change I have witnessed is that, as with many cities, Paris is being reorganised with a view to becoming more environmentally friendly. This basically means that some roads have been closed off to traffic. The result seems to be somewhat counter-productive because today there are traffic jams in places where previously the traffic used to flow – such as along the banks of the Seine where there is now only one traffic lane on each side as opposed to two. The upside is that the congestion also makes cab rides longer, thereby affording me more time to have conversations with the drivers. My thinking is that this might just give me enough material for Volume II one day!

Where are your favourite places in Paris?

Again, where do I start? I could go on forever but I would say my favourite café has to be the George V on the Champs-Elysées (not to be confused with the swanky George V hotel). This is a traditional French café and I don’t think the menu has changed in all the time I have lived here! My favourite area of Paris is Montmartre. As for museums, in addition to all the main well-known ones, I really like the Balzac museum. I studied Balzac at Oxford. I love his books and to see the tiny desk where he wrote them is really quite something.

Nicky Gentil is the author of Taxi Tales from Paris, published on 28 January 2020 by Troubadour

Previous Article Brexit: No changes during transition period
Next Article Why it’s a difficult time to buy a French property – and why that’s great news!