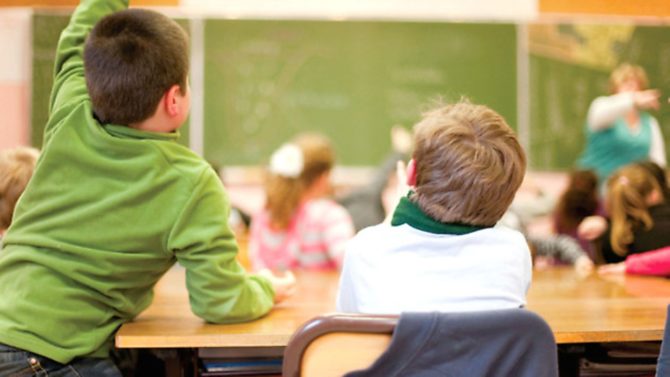 Starting a French school is a steep learning curve for children but it also proves an education for parents too. From how to communicate with other parents to the differences between school meals, here are 5 things I learnt when my children started school in France

As a newcomer to France, having children in the local school really helps you integrate into the local community – the school gates, annual fêtes, play dates and birthday parties are brilliant places to meet other parents. Our three children all go to the local primary school in the suburb of Toulouse where we live, and this has helped us all feel involved and has enabled us to get to know people. But starting at a new school in a new country involves a steep learning curve – and not just for the children. The approach to school work, school gate etiquette, the canteen… it’s all very different to the English system. Here are five key things I have learned so far from having children in French school:

1. The French teach handwriting much better: At French maternelle, the children started off writing in slightly shouty UPPERCASE. They then progressed, quickly, to a beautiful, calligraphic, cursive style. It’s all curls and swirls and loops in the right places, and getting those elements wrong is punished with a heavy dose of red ink. When I learned to write, we had to start off with clear letters, then we learned to give all letters a little tail. Then one day, when we were old enough, that little tail was used to connect to the next letter and hey presto, we’d learned joined-up writing. The French teachers would never stand for it.

2. My pronunciation is not as good as I thought: I knew I had an English accent, but I studied French for years, and there were certain words I was pretty sure I had nailed. Like ‘pantalon’. As far as I was concerned, I could say ‘trousers’ in French, and the ‘pan’ and the ‘lon’ bits sounded the same. But they don’t. Who knew? Actually, my children knew. It took their baffled expressions when I read out words for a spelling test for me to see how wrong I’d been. They read each other’s spelling tests out now – it’s kinder for all involved.

3. French school dinners are so much better than British school dinners: Our children eat in the school canteen, and I envy them a little bit. They get a three-course meal every day. A typical school lunch might be beetroot salad followed by braised veal with a chocolate éclair for pudding, or spring vegetable soup, moules-frites as a main course with a pear for pudding. Generally they love their lunches – and the canteen staff make sure they try everything. They also keep a close eye on table manners. These days, mealtimes at home are often punctuated with: “Your HAND!” from one of the children. In France, it transpires, a hand not holding cutlery should always be placed on the table to the side of your plate, so that both hands are visible at all times, not hiding suspiciously under the table. Find out 10 more differences between French and British schools

4. Knowing when to use ‘vous’ and ‘tu’ is a minefield: I thought this might just be me, but French friends confirm that knowing when to use ‘vous’, and the less formal ‘tu’ with people you don’t know well can be difficult. As a new parent at the school gates, it’s simple – adults you don’t know well = ‘vous’, children = ‘tu’. But when you start to get to know the other parents, it gets more complicated – at some point you might become more friendly and make the transition from ‘vous’ to ‘tu’. For Brits this is tricky. Who decides when you know the person well enough to call them ‘tu’? Will they be offended if you say ‘tu’ when they have used ‘vous’? It’s a social minefield. Except it’s not really – because, I have learnt, you just ask. Often a person you speak to often will suggest it (“On peut se tutoyer?”) and it’s perfectly ok for you to do the same. Some people simply say ‘tu’ more naturally than others, so you can follow suit. Teachers, though, are always ‘vous’. Once you know a few people, be warned you need to leave extra time on the school run so you can ‘faire la bise’ (kiss on both cheeks) with friends at the school gate.

5. There might be no lessons in France on a Wednesday afternoon but it isn’t a restful day: French primary school age children used to have a five-day week, with no classes on Wednesdays but lessons on Saturday mornings. In 2008, this was dropped and many schools operated a four-day week with Wednesdays off. In 2013, the ‘rythme scolaire’ (the school routine) was changed again to allow for shorter school days, and today most primary school children have Wednesday afternoons off. In theory, it’s for a midweek rest. But in reality this is when all the extra-curricular activities, from swimming to obscure martial arts, take place. As a result, Wednesday afternoons often become a race against time with parents frantically trying to get their children from one session of organised fun to the next – the level of effort required is multiplied according to the number of children in your taxi. Suffice to say, wine o’clock is earlier on Wednesdays.

More on education and children:

5 tips for moving to France as a family