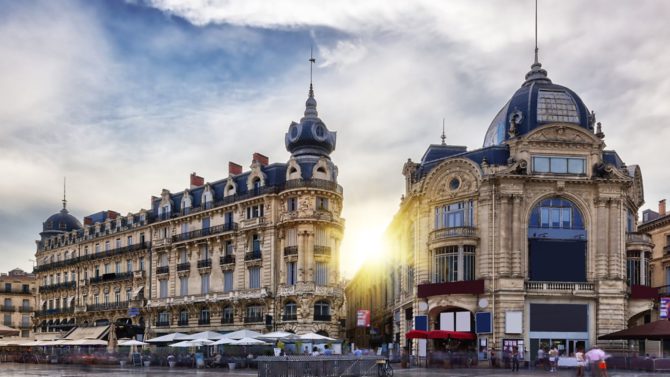 Known for its laid-back elegance, Montpellier is an enchanting southern city with plenty to rival its glitzy Côte d’Azur cousins. Here’s our insider’s guide to the main attractions, restaurants and property in Montpellier

Founded in the 10th century by the Counts of Toulouse, the city of Montpellier later became a prosperous trading port and scholarly centre with Europe’s first medical school established here in the 12th century. Today, students make up over a third of the city’s population, and with a Mediterranean climate that sees Montpellier basking in sunshine for more than 300 days a year it should come as little surprise that the city is hugely popular with both French and British visitors.

WHAT TO SEE AND DO IN MONTPELLIER

The city’s historic centre, known as Écusson because of its shield-like shape, boasts a number of grand hôtels particuliers (18th-century mansions), many of which can be visited. Wander through the narrow streets past the 14th-century Saint-Pierre cathedral until you reach the Place de la Comédie, the city’s main square which is home to the 19th century Opera Comédie. View one of France’s largest collections of European art at the Musée Farbre and just a little further along is the Jardin des Plantes, one of the oldest botanical gardens in France. For a lovely view over vieux Montpellier head to Place Royal du Peyrou, a 17th century square built at the highest point of the old centre.

One of the city’s lesser known attractions are its numerous folies. These elegant mansion houses date back to the 18th century, a period of prosperity for the city when the growing ranks of the bourgeoisie wanted to show off their new-found wealth and status. They invested their money into property and built these elegant folies, a word which, in French, can mean extravagance as well as madness. Many folies still exist today; examples include the Château de Flaugergues, which stands tall behind a symmetrical garden and boasts a 30-hectare vineyard; and the Château de l’Engarran, where a series of statues immortalise the original owner’s love for his wife.

A great place for a bite to eat is Le Pré Vert (mains from €11.00) on Rue Sainte-Anne in the historic centre.

For those with a sweet tooth a visit to Chocolats Thierry Papereux on Rue Saint-Paul is a must where specialities include Le Montpelliérain, a liquorice-flavoured macaron.

Budget: The cute Hotel-du-Parc is less than a 10-minute tram ride from the centre of Montpellier and comes with a terrace, gardens and friendly staff. Dobles from £69.

Mid-range: Baudon de Mauny is a stylish guesthouse in an 18th-century hôtel particulier, with eight rooms, some with views over the pedestrianised historic centre. Doubles from €145. Baudon de Mauny

Montpellier as a place to live is increasingly popular. In fact, it is now the fastest-growing city in France with approximately 1,000 people moving to the city every month. In recent years, there has been an exodus of businesses relocating to Montpellier from cramped cities such as Paris, Marseille and Toulouse lured by the prospect of more space and cheaper overheads, with company set-up costs over 25% less than Paris. The city is economically dynamic and is home to a number of high-tech industries (IBM and Dell both have bases here) as well as world-leading companies specialising in the chemical and pharmaceutical industries.

In Montpellier’s historic centre, you are most likely to find elegant apartments in Haussmann-style buildings for which you can expect to pay anything from €300,000 upwards. Although apartments in the heart of the city might be on the pricier side, a quarterly report from the French notaries’ association states that apartment prices in Montpellier were down by 4.8% at the end of the second quarter of 2015, with an average price of approximately €2776 per square metre.