How to get booked: 2 holiday lets with stunning interiors 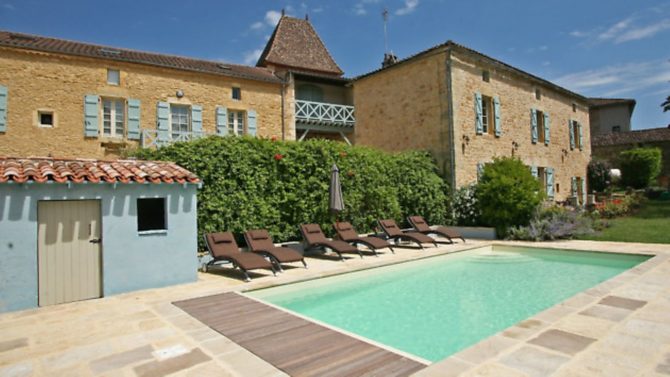 La Cressonnière, which sleeps up to eight guests, and the neighbouring Le Presbytère, which sleeps six, are located in a picturesque hamlet near Puy-L’Evêque. Le Presbytère was originally the parsonage for the church in Loupiac and, although the date stone states 1832, some sections go back to medieval times. La Cressonniere also has a history as a watercress farm.

Current owners Barry and Paula Casement have created stylish, luxurious interiors that combine the unashamedly modern with period features. To emulate this approach, they retained, where possible, the original exposed beams, terracotta floors and open fireplaces.

They then chose sleek, bright kitchens and bathrooms with clean lines and opted for large, contemporary pieces of furniture that make a bold statement in the home’s uncluttered spaces. Keeping wall colours rich and warm with white for contrast creates a luxurious feel, and the couple’s eye-catching period pieces emphasise the enticing mix of modern and traditional elements.

La Cour is a typically French maison de bourg and – together with its adjoining cottage – lies at the edge of Carennac, one of France’s Plus Beaux Villages. The properties, which each sleep four guests, were built 60 years ago by the village maire and the family told Kathy and Paul Godfrey, the current owners, that it had been a very happy home to four generations. This inspired the couple to recreate the cosy, welcoming home it had once been, with a nod to early 20th-century French country style.

If you want to achieve this look, then make sure that kitchens and bathrooms have a traditional feel by using natural materials, soft colours and lots of pictures and ornaments that evoke a French country feel. Kathy chose soft furnishings in natural fabrics such as cotton and linen with sisal rugs on the floor. She used a palette of French provincial colours such as blues, creams, greys and warm earth tones.

Authentic French furniture can still be found in local dépots-ventes and brocantes and brown furniture can be transformed by painting it grey or white. Finish the effect by choosing practical decorative touches that are pretty but not too precious, so accidental damage is not a disaster.