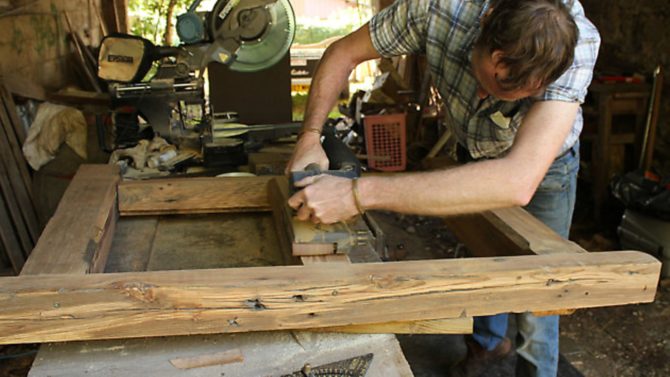 In the first part of her renovation diary, Carolyn Cornthwaite tackles the overgrown orchard, creates a reclaimed kitchen and makes friends with the neighbours in France

We started thinking seriously about moving to France in 2011, and since then have sold our English home and purchased a 1920s property on the edge of Najac in Midi-Pyrénées, close to the river and set in 2.5ha of land.

The house is structurally sound but requires a lot of cosmetic work and internal changes as we intend to open a chambres d’hôtes, the first rooms hopefully coming available in April.

We fell in love with France in 1991 when Rob worked in the Pyrénées and we always said we would return. Fast forward to 28 September 2014 and our long route back finally came to an end. At just before midnight we stepped over the threshold of our new home in Aveyron (a tad tired and armed only with a small torch and plenty of ambition), searched for the mains switch and at last shed light on two decades of ideas.

Reality hit us the next morning. The front  of the house was a small forest and we didn’t even dare think about the back – all 2.5ha of orchard and woodland. The house had been abandoned since 2011 and neither the inside nor the grounds had fared well.

Our first days in France were long and busy, removing three years’ worth of dead flies, unpacking the minimum of items necessary for everyday life, clearing gardens, and sorting plumbing (it burst in countless places after a harsh freeze two winters ago). At least there was plenty of variety.

Our French-speaking skills soon returned as we engaged in many conversations with our extremely welcoming French neighbours, which led onto further conversations as we loaded our car and trailer for another visit to the déchetterie while describing the state of the interior. You know you have your work cut out when you find yourselves on first-name terms with the man at the tip before the end of your first week in France.

We made friends with our neighbours in August after the signing and they were waiting expectantly on our return at the end of September. They still ask us if we are planning to stay all year round (an important point for the locals) but they don’t ask as much as they did. It was good to be able to say to our neighbours, ‘C’est meilleur maintenant, n’est-ce pas?’ and receive their appreciative nods as we transformed the front of the house from a wasteland to a serviceable entrance and, of course, Rob made sure to strim and tidy the footpath and communal bins area too.

Our neighbour’s son, Mark, is a farmer and we had noticed he had a digger so, on our second week, Rob used his best French to ask if we could pay him to excavate the front garden. After many more stumbling French conversations concerning farming, fencing and agriculture in general, not only did Rob get honoured with the use of the digger but  Mark drove him around, helped us order stone (for the best prices), collected and delivered the stone and took away the waste soil. The whole job was done in a day and we made valuable connections.

Improving the front of the house was straightforward compared with the back and the woodland. The orchard took several days of strimming, pruning and felling before we realised what a wonderful place it was. We have plums, several varieties of apple, quince and a fig tree – I now have a year to learn about jamming, drying and juicing in order to make the most of our crop.

Najac holds a mass pressing at the beginning of November, so from autumn 2015 we have the opportunity to net ourselves a year’s supply of apple

juice, and then of course there’s the lure of freshly baked tarte tatin and all manner of savoury delights including sausage and apple, pork and apple and apple chutney.

Inside our first task was creating a kitchen as all we had was an old four-ring gas hob set on a slope, which made frying food an interesting experience, and a sink unit at a height more suited to a seven-year-old; but we’d built our English home from scratch and the chance to make our own mark on this property was a delight not a chore – especially when we started to root around upstairs.

Like many French houses this was sold ‘with bits’ so to speak; deserted in 2011, what was there was staying there but once we had cleared several loads of boxes, rotten clothes and mouldy fabric we found a treasure trove  of oak, pine and chestnut. What with the unearthed cupboard doors, a stunning oak bar, and old handles and locks, our kitchen will have only cost us time and appliances by the time it is finished.

Teamed with some of our brocante and fête bargains, we are hoping to open with a unique kitchen that will, if nothing else, get our guests talking over their breakfast. My favourites are the new bar stools which Rob has made from antique tractor seats and old oak fenceposts.

Having moved to France we are determined to live comme les Français. That’s why we came, after all: for the lifestyle for which we yearned and yet, despite these desires, we remain English and some things still catch us out. Like dashing for bin bags and a tub of crème fraiche one morning.

There is no longer any such thing as dashing; this is France so why would you hurry? Yet speed was exactly what we intended on our first Friday when we wanted to get as much work completed as possible. Rob waited outside the Intermarché as I ran inside. If this had been the UK I’d have grabbed the shopping, nipped through the self-service checkout and been back in the car before you could blink.

But this isn’t the UK and on walking into the store I noted the queue at the only open checkout that snaked along the side of the vegetables reaching to the chiller cabinets and the fish. I could do without the crème fraiche but no way could our day be productive without the bin bags.

By the time I’d found the necessities I was pleased to see that another checkout had opened and duly joined the shorter queue, consisting only of an elderly lady already being served, another older gentleman, items already on the belt, and a young lad in his 20s with a multipack of crisps and a bag of plums. I expected to be out in seconds.

The lady at the checkout remained there for some time, smiling feebly and muttering French pleasantries as the operator ran about the store trying to find the price of some unknown item (this happened three times). Meanwhile, the gentleman politely told the young man to move out of the way when his wife appeared with a shopping trolley full of provisions including, it would turn out, more non-barcoded stock.

While the new lady unloaded shopping,  her husband produced a sheaf of coupons which he proceeded to place under the corresponding items. This is the way you redeem vouchers in France: the operator reading each coupon, checking the item and keying in the discount manually.

My supermarket trip took ages but throughout it all everyone maintained a large smile – it could only happen in France.

After six weeks in France, we are still in the honeymoon period, that dangerous time when even the most troublesome inconveniences are still bathed in the rosy tint of French life. As we settle into this new way of living, taking coffee at the local bar with our freshly bought croissants (to improve our French), visiting the various local markets, joining the once-monthly village meal, it’s easy to forget that this is our new business venture and, come April, we hope to have at least two rooms ready for rental.

As we approach our deadline there is no doubt that the reality of our mission will kick in and the leisurely mornings, daily evening strolls and long lunches will have to make way for a little more frenzied work, but for now we’re basking in the warmth of our lifestyle change and, in answer to the frequent question, non, je ne regrette rien!