French food delicacies you should try 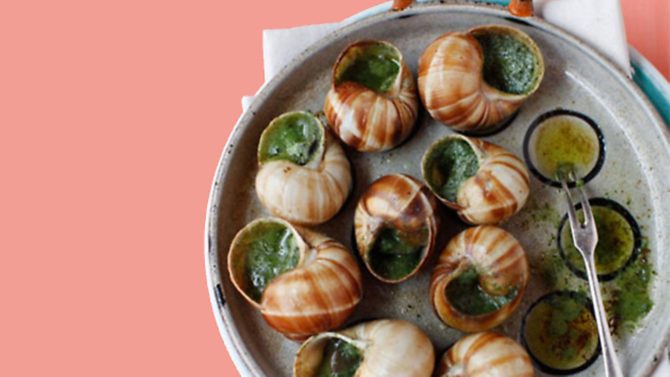 Snails, frogs’ legs and sea urchins… Be brave and try some French delicacies, you might be pleasantly surprised

If you already like cockles and mussels, it’s time to make friends with another mollusc: the humble snail. Beginners can opt for the classic version à la Bourguignonne, in which the creatures are served in their shells with generous lashings of garlicky, herby butter. Snails are high in protein and surprisingly low in fat, making them rather healthy (minus the butter). For eating at home, buy a traditional stoneware snail dish, or try a moreish snail terrine with tomatoes and cognac.

Not for the faint-hearted, this ‘blood sausage’ is one of France’s oldest charcuteries and the Parisian recipe combines equal parts of pig’s blood, fat and onions. It’s commonly grilled and served with potatoes and apples – if thick slices put you off, you could try crumbling it over the other ingredients for an earthy kick, or buy a spreadable version ideal for canapés. A lively boudin festival is held in Normandy every March.

It’s actually the coral (roe) of these spiny beasts that makes French chefs swoon. At the Michelin-starred Restaurant Le Divellec in Paris, their frightening appearance is transformed into something resembling soft-boiled eggs – what could be friendlier? – and they are eaten à la coque (in the shell) with a teaspoon and a hunk of bread. Fishermen on the south coast would argue they are best consumed fresh from the rocks with a bottle of Cassis. Urchins are a nutritious source of both omega-3 fatty acids and zinc – the latter ironically good for wound-healing – and have a delightful, creamy texture.

“They’re just like chicken!” is a common theory about these little amphibian legs, when actually, their texture more closely resembles that of white fish. There’s nothing repugnant about the eating of frogs’ legs, but preparing them yourself might have you squealing in fright; being cold-blooded creatures, rigor mortis doesn’t set in so readily and if they’re really fresh, salt will stimulate the muscles so the legs almost revert back to their hopping, jumping selves. To save yourself the trauma, look out for them on a restaurant menu served à la Provençale (with potatoes and tomatoes) or à la Parisienne, in which the garlic-breadcrumbed limbs could almost pass for oversized whitebait.

Previous Article What type of French property do you want to buy?
Next Article The easy way to navigate around France