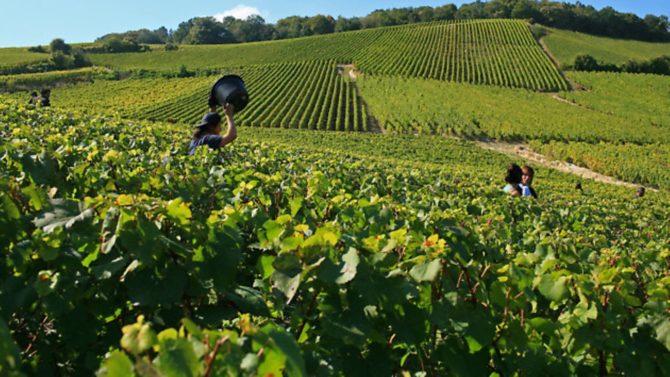 As UNESCO adds parts of Champagne and Burgundy to its World Heritage List, Vicky Leigh takes a tour of these wine-producing regions and looks at property for sale

At its 39th assembly in Germany, UNESCO awarded World Heritage status to two further sites in France, taking the country’s total to 41. Recognised for their ‘viticultural heritage’, parts of Champagne and Burgundy have now joined a list of more than a thousand sites across the world deemed to be “of outstanding value to humanity”. According to President François Hollande, the awards were “a mark of international recognition of the exceptional heritage of these regions and shows the diversity and energy of these lands that are the wealth of our country.”

How appropriate that the celebratory drink of choice in many countries around the world can now raise a toast to itself. We take a tour through these famous vineyards to find out more.

“Champagne! In victory one deserves it, in defeat one needs it” – Napoleon Bonaparte

The UNESCO decision marked the end of an eight-year-long application to obtain World Heritage status, which now covers ‘the places sparkling wine was developed using a second fermentation method in the bottle’ from the early 17th century to the 19th century. As such, UNESCO has recognised the historic hillsides, cellars and sales houses where champagne is made and sold, commenting that they are “clear testimony to the development of a very specialised artisan activity that has become an agro-industrial enterprise”.

It praised the vineyards of Aÿ and Mareuil-sur-Aÿ, as well as Saint-Nicaise Hill, a street in Reims dotted with champagne houses, while the cellars of famous names such as Ruinart, Pommery and Veuve Clicquot were also included. The village of Hautvillers, where legend has it that the monk Dom Pérignon first invented the double fermentation technique that gives champagne its fizz (he didn’t but it’s a popular myth), also received a special mention, as did the Avenue de Champagne in Épernay. The latter is often said to be the most expensive address in the world – more so than the Champs-Élysées in Paris – due to the millions of bottles of bubbly that are stored in the vast, 100km-long chalk cellars beneath.

Situated in the Marne department of Champagne-Ardenne, Reims is considered to be the unofficial capital of the champagne-making region and is synonymous with some of the world’s most prestigious fizz, including Mumm and Taittinger. This is where the Montagne de Reims Champagne Route begins, and while a visit to the town would not be complete without sampling a coupe or two there’s a lot more to Reims than those – albeit extremely impressive – bubbles.

The rolling hills of the north-eastern Champagne region already contain some of the most expensive agricultural land in Europe and experts predict that inclusion on the UNESCO list could cause land prices to rise further still, not to mention boost tourism by up to 20%.

“The flavour of wine is like delicate poetry” – Louis Pasteur

For Burgundy, the UNESCO status covers the region’s 1,247 climats, a term specific to this part of France that is used to express the notion of terroir. The climats refer to the patchwork of defined vineyard plots that cover the slopes of the Côte de Nuits and the Côte de Beaune. The World Heritage status also refers to the villages and town of Beaune, which play a central role in the production and commercialisation of these wines, as well as the historic centre of Dijon.

Both the Côte de Nuits and Côte de Beaune vineyards can be found on the Côte-d’Or, a limestone escarpment that translates as ‘the golden hillside’ and after which the department where they are located is named.

It is believed that the area around Beaune has produced wine since 300AD, and it’s hardly surprising that it is often referred to as the ‘capital of Burgundy wines’. Beneath Beaune’s cobbled streets is one of the largest networks of cellars in the world; an underground town of thousands of wine casks and millions of bottles.

The old town with its attractive half-timbered buildings is based around the Hôtel-Dieu, a 15th-century hospital complex famous for its multicoloured roof and imposing architecture. The building was founded in 1443 by Nicolas Rolin in a bid to relieve some of the misery caused by the Hundred Years’ War, and is the main beneficiary of the annual Hospices de Beaune charity wine auction, which began in 1859 and is held every November.

Capital of both the Côte-d’Or department and the Burgundy region, Dijon has a rich history dating back to Roman times. The Route des Grands Crus stretches along the foot of the Côte-d’Or escarpment from Dijon in the north to Santenay in the south, passing through the vineyards of Côte de Nuits and Côte de Beaune. And while these prestigious wines are more than enough to set Dijon apart, it does have a number of other impressive claims to fame, as the birthplace of mustard, the Kir cocktail and none other than Gustave Eiffel. While Paris might be home to his most iconic piece of work, you’ll find another example here in Dijon, in the form of the indoor market hall Les Halles.