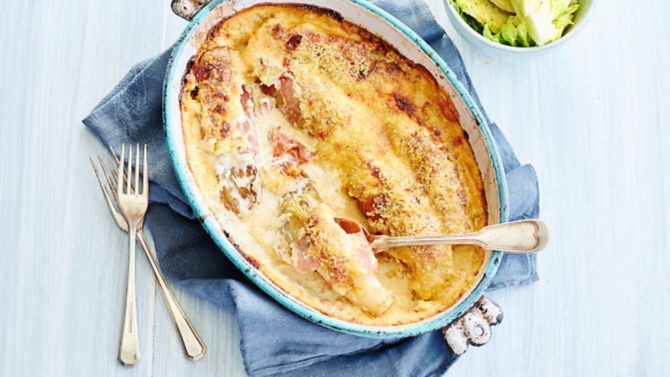 I have had numerous and, at times, heated, discussions around the dinner table, as to what is the real name of the salad leaf at the heart of this much-loved dish, and to be honest it is a little confusing for English, French and Belgians – even with research, it can be difficult to determine what’s correct. What is true for all, however, is that the vegetable used in this classic French and Belgian dish is a member of the common chicory family, a wild perennial herbaceous plant that grows in Europe.

That said, it is cultivated chicory that we eat, and this is then divided into several different varieties which include three easily recognisable lettuce: radicchio, sugarloaf lettuce (similar to a butter lettuce) and Belgian endive (whitlof or chicon), which is a tight-leafed lettuce conical in shape and pointed at one end. This shouldn’t be confused with endive, which is the lettuce more commonly called friséeor curly endive, and is a different species to chicory. Just to make it even more complicated, in France it is also called endive, and it is this you need to buy to create this dish at home.

Chicory comes in three different colours: red, green and pale yellow/white. The white variety is forced in dark cellars or under a dark barrel, a practice that originated in France in the 17th century, and was taken up in Belgium around 1850, where the plant was known as witloof, meaning ‘white leaf’. For this recipe you can, in fact, use any of the three varieties; all are equally delicious.

Chicory is most valued as a salad leaf, adding a hint of bitterness to a dish, but it is equally delicious braised and then cooked wrapped in ham, covered with a cheese sauce and baked. Depending on where you are in France, you will find this dish on menus under different names. In the north of France and in Belgium, it is called chicons flamands, while if you’re perusing menus in other regions, you may well find it under its other name of endives au jambon.

So now you see, it is hardly surprising that there is confusion. One thing for sure though, the baked dish tastes fantastic, and my version here is lighter than the original with a cream sauce rather than a roux, and topped with Parmesan breadcrumbs to add texture to the dish – great as an informal supper dish, served simply with a green salad and bread, if desired, to best mop up the juices.

• the juice of half a lemon

1. Preheat the oven to 190°C/170°C fan. Melt the butter in a flameproof casserole dish, add the chicory heads and cook over a medium heat for 5-6 minutes until browned all over. Add a splash of cold water and the lemon juice and season. Cover the dish with a lid or tin foil and transfer to the oven. Bake for about 45 minutes until the chicory are tender.

2. Remove from the oven and leave to cool for about 10 minutes, then wrap each chicory with a slice of the ham and return to the dish. Combine the cream, nutmeg and Comté cheese and pour over the chicory. Scatter over the Parmesan cheese and breadcrumbs and bake for 15 minutes until bubbling and golden. Serve with the little gems, seasoned and dressed with olive oil and lemon juice.

Try some other French favourites with our recipes for: cheese soufflé and cherry clafoutis