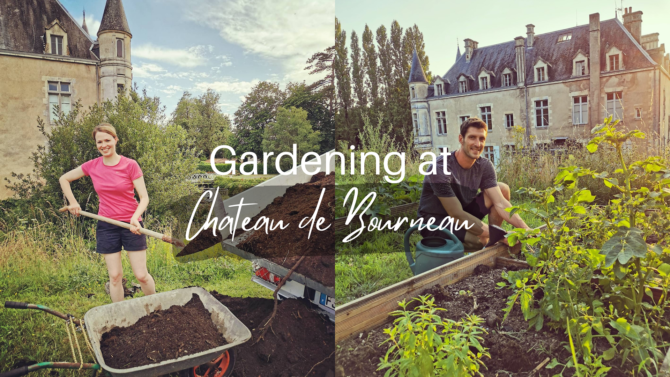 As a Londoner, moving to rural France and looking after a 16-hectare estate has been a steep but delightful learning curve. I am embarrassed to admit that I was that city-dweller buying tasteless strawberries in winter, entirely ignorant of seasonal produce or air miles. The extent of my gardening knowledge was limited to a rather spoilt selection of window-sill herbs, which decided whether or not they could be bothered to grow in a grey climate.

However, before we moved to Château de Bourneau, we started our French adventure at my fiancé Jean-Baptiste’s family organic farm, Clos de Rochy, in Burgundy. It was there that my eyes were opened to the beauty of homegrown and the particularly French rural charm of the ‘potager’.

For a household of seven, a supermarket shop was amazingly rare because the family were almost entirely self-sufficient: we ate seasonally and the potager prolifically grew a wide variety of produce throughout the year from sun-blushed tomatoes and strawberries to potatoes, leeks, asparagus and pumpkins. Salad was cut fresh from the garden minutes before it was washed and plated, hectares of orchards shared their bounty and stocked the cupboards throughout winter with a hive of jarring and jamming, chopping and pickling. And beside Jean-Baptiste’s mother in the kitchen, I learned to speak French and about this beautiful countryside culture through the language of food and wholesome cuisine.

When we finally arrived at Château de Bourneau, the importance of this rural ritual was not lost on me and we decided to start our very own kitchen garden on a piece of land ravaged by tangles of brambles.

I don’t think I realised how physically demanding raking the soil, pulling up weeds and chopping back errant trees really is. Heaving piles of wood and battling with the profusion of brambles that wound their way through bushes and trees was a challenge for my non-existent biceps. And yet there is something quite pleasing about this activity. I’m surprising myself by how much I love being outside in the wintry sunshine, breathing in the fresh air while toiling the land. I feel like I’m at a cross-fit class but one with an actual physical purpose that isn’t just to pay someone to shout at me to make me burn calories so I can eat that extra pain au chocolat.

Hours seem to pass by without me noticing and the changing, evolving landscape is a wonderful reward for the hard physical work. We built raised beds, heaped in compost and soil, and as we continued to clear the land we suddenly made a discovery.

Out of this abandoned place, hidden under decades of brambles and bracken, was an old gardening irrigation system from a past when the château’s garden thrived. It felt somehow so fitting that out of all the spots we could have chosen, we had coincidently selected the same place as our château’s ancestors and now in their footsteps, we were simply returning Château de Bourneau’s potager to where it has always been.

Previous Article Film review: Paris, 13th District
Next Article BBC stalwart John Simpson on why he loved his Paris apartment but now wants to buy in the south of France