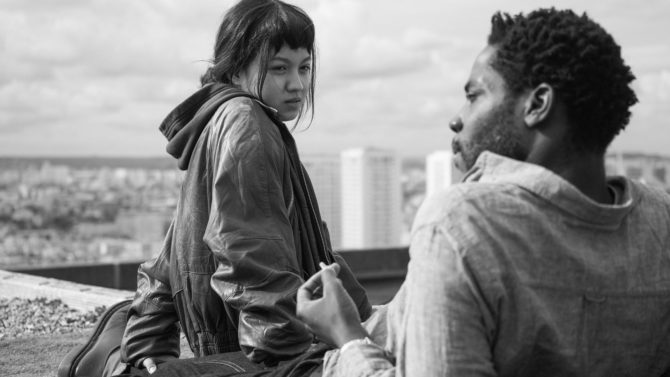 By combining American comics, the French New Wave and Parisian high-rises, Jacques Audiard has come up with something rather special. A sexy, insightful, visually striking film about love and loss, Paris, 13th District continues a remarkable run of form for the director who’s given us A Prophet, Rust and Bone and The Sisters Brothers.

Based on three graphic novels by Adrian Tomine (and inspired by Eric Rohmer’s 1969 classic My Night at Maud’s), the film uses Les Olympiades, a neighbourhood of tower blocks in the 13th arrondissement, as a backdrop to the intertwined love lives of four Parisians. Call centre worker Emilie (the impressive Zhang) starts a steamy fling with her flat mate, teacher Camille (Samba), only for him to unceremoniously dump her after a week.

Meanwhile, Nora (Merlant) enrolls in college in her thirties but sees her new life wrecked when fellow students mistake her for online sex worker Amber Sweet (Jehnny Beth). A curious Nora befriends her doppelganger and also starts working with Camille, who, in turn, is cosying up to Emilie again. As lives intersect, infatuation makes way for true love.

Blending red-hot passion with stark monochromatic cinematography, Paris, 13th District sizzles and surprises at every turn. Some of the most poignant moments arrive when the characters reach out to their families. Scenes featuring Camille’s young sister and Emilie’s grandmother, who suffers from dementia, lends real emotional depth to a film that underlines Audiard’s status as one of the finest French directors working today.
FRANCE Magazine rating: 4 stars

Previous Article Eiffel Tower landscaping project gets the green light
Next Article From the city of London to a French Chateau: Discovering the beauty of homegrown produce and gardening