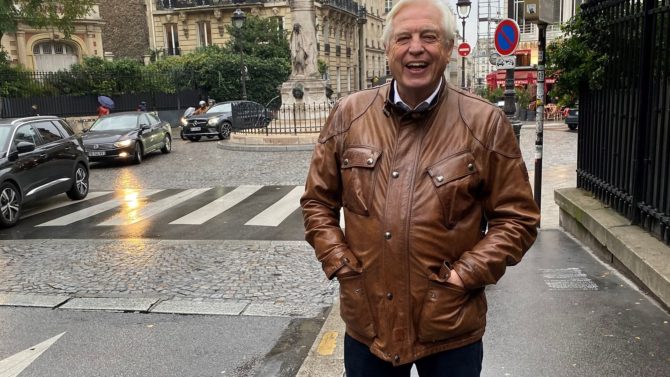 From war zones to Paris, BBC World Affairs editor John Simpson and his wife Dee can feel at home anywhere, and now they’re househunting in the south of France, he tells Richard Webber.

You bought a Paris apartment in 1999 and owned it for nearly 20 years – tell me about it?

Dee: John and I agreed that it had to be on the Left Bank for all the romantic, intellectual and artistic associations with Gertrude Stein, the American novelist and art collector who became such a central figure in the Parisian art world. It was in a typical mid-19th century block of white sandstone on Rue St-Dominique, one of those charming Parisian streets which completely steals your heart in one quick glance.

John: The apartment had delicate cast-iron balcony details and an outsized double door leading directly to the street, but also blocked off the inner life of the building to make it a private enclave and a part of that hidden world of Paris known only to its residents. We had fun being able to say it’s right under the Eiffel Tower, knowing that whenever friends or family visited they’d never get lost trying to find us.

How often did you use it?

Dee: I travelled the world for many years with John as one of his news producers for the BBC before our son, Rafe, who’s now 16, was born. We were constantly on the go and joked that our real home was British Airways! We couldn’t stand the thought of being in another hotel room in our down time and wanted to own a little patch of Paris to return to during those rare times we had to ourselves.

John: We’d often turn up last minute, not knowing whether we’d stay for a weekend or a month. It did feel like we were on holiday which was part of the fun. So we’d visit our bijou apartment as often as we could.

What were your favourite aspects of the apartment?

Dee: It wasn’t very big or particularly grand but had so much character and luxurious details. It exuded that chic ‘je ne sais quoi’ that only Paris could produce. Despite being in the middle of the city, it was so well designed that the famous honking horns of impatient drivers and general city sounds never became a nuisance. And our lovely large bedroom overlooked a courtyard at the back of the building, enabling us to open the shutters in the warm seasons and let in the evening breeze without being disturbed.

John: So many uniquely Parisian aspects made it special, such as being able to walk to the best bits of central Paris – from the legendary fashion houses of Chanel and Dior to the legends of cuisine and art. All we had to do to reach the Champs Elysées was to cross the Pont de l’Alma on foot, five minutes from our front door, via the beautiful Avenue Montaigne, or the Avenue Georges V.

Dee: Furthermore, a mere moment or two from the flat was the Champ de Mars, the beautiful green space surrounding the Tour Eiffel where we started off having picnics as a couple and later frequented with our son to play on Sundays and lazy afternoons.

You must have many special memories of your time at the apartment?

Dee: Loads, such as the occasion when John and I were eating at a very chic seafood brasserie nearby when Karl Lagerfeld floated in casually and occupied a large table next to us. He nodded a greeting towards me and John which made my Chanel-loving day and deferred to us quietly throughout the meal. I couldn’t work out who was more intrigued with the other. I thanked heavens that I’d bothered to dress well before going out that night!

John: And then there was the time we played football on the small pitch in the Champ de Mars. One evening a friend of ours – an avid Arsenal fan who’s also head of the Strasbourg Opera House – came round for supper while our little nephew Rees, then nine, was staying over. The four of us had supper at Constant’s famous restaurant Le Violin d’Ingres, situated below the flat, before playing football under the Eiffel. It was so much fun; we played way beyond midnight. It was one of those unplanned magical evenings that I’ll never forget: the wind-free spring-time air you seem to breathe only in Paris, the atmosphere of the city dancing on your skin in unison with the lights of that grandest of towers, La Tour Eiffel.

Why did you sell it four years ago?

Dee: I’ve always had a yen to live on the Mediterranean, ever since visiting the Côte d’Azur in the 1980s as a kid. Our plan is to find a property on the Riviera where we can spend more leisure time now that life is slightly less frenetic. There are so many daily flights from London to Nice and John could get to all the trouble spots at a moment’s notice from there, if necessary.

John: Rafe, who’s a teenager now, loves diving and all the other fun sports you can have on and in the water. So what could be nicer than sitting on a sunny terrace sipping pastis or, in Dee’s case, a Château Ott, while watching the parade of people go by against that perfect backdrop of the sea? But we’re torn between having the hassle-free existence of a beautiful apartment in Nice or Cannes and a villa with a swimming pool further afield. Currently, we’re scouting various areas with agents who’ve shown us different properties ranging from apartments in Nice to bigger places further along the coast from Cannes towards St-Raphael. A view of la mer is an important part of our idea of living there. We came close to putting in an offer on the top floor of a 1930s Scott Fitzgerald villa near Cap d’Antibes but decided to take our time to make sure we get what we want.

Will you miss Paris?

Dee: We’ll still visit, of course, and it’ll always be the queen of cities as far as I’m concerned. Visitors who don’t know Paris think of it as a grandiose place filled with haughty citizens sporting a superiority complex or some uniquely Parisian attitude problem. Yes, there are elements of that, but when you scratch the surface you soon start to find that the Parisians are warm and quirky individuals too.

John: There is genuine looking out for each other. Paris is not just a Hollywood film set of French clichés; it’s a very homely town with each quartier exuding its own character and communal ‘village’ feeling.

Dee: Paris is also a relatively small city in comparison to places like London or Tokyo, making it very easy to traverse. We like driving our car around the city, too. The traffic is never as bad as many other cities. Mind you, dicing round the Étoile in a convertible playing chicken with those trying to make their perilous way in or out of it is still one of my guilty pleasures!

Is there anything you don’t like about the city?

Dee: The thing that makes us smile is also something that can be wearing sometimes: the dogmatic ways of the French, especially when it comes to their food culture. When John won the famed Bayeux Prize for War Correspondent of the Year [the Bayeux Calvados-Normandy Award for War Correspondents], the producers of calvados created a special apéritif for the event, mixing Calvados with tonic. We loved it and once back in Paris, ordered it at our local street café. The waiter nearly had a seizure à lá Marcel Marceau when I asked for it, and in spite of John explaining the rationale behind my strange cocktail request in his best French the waiter looked aghast.

He eventually brought it over most reluctantly, shaking his head and making a face as if I’d asked him to do something utterly improper. He stood back theatrically so that I could pour the offending tonic into the holy elixir of Calvados and gaped mouth open as I drained it to the bottom in relish. All very amusing so long as you don’t mind being patronised too much.

John: Every society has its way of doing things but in France it truly is their way or the highway. On the other hand, it was fun this past summer to spot that the idea of a ‘Poké Bowl’ has become acceptable in cafés and bistrots everywhere – a bit of Asian fusion food creeping in at last among the usual fare of confit de canard and the great boulevard dishes of old France.

A question for you, John – do you regard yourself as a Francophile?

John: I go through phases. Sometimes, I feel immensely pro-French, but then I read something a French politician or writer has said about Britain, usually without understanding anything about it, and my dislike of French bureaucracy and rigidity comes pouring back. Basically, though, I love the place and the people. What I love most, however, are Anglophiles who understand that neither France nor Britain are perfect, but appreciate them both anyway. For me, France is a delightful place to live, as long as I can keep one foot in Britain for a bit of down-to-earth sanity.

And tell me about your relationship with France over the years, including reporting on French politics and receiving the Bayeux Calvados-Normandy Award?

John: I’ve always loved reporting on French politics, though I haven’t personally liked any French president since the charming, if snarky, Jacques Chirac. He said to me once that he was fundamentally an Anglophile, even if he didn’t choose to show it. The old fox also raced across a crowded room at a rather grand occasion at London’s Mansion House held in his honour to kiss Dee’s hand, which made her smile particularly widely. Receiving the Bayeux Calvados-Normandy Award for war correspondents was a real honour for me. France has a fine tradition of war reporting and I counted myself in very good company.

John’s latest novel, Our Friends in Beijing, is published by John Murray and is available in hardback, price £18.99.

Previous Article From the city of London to a French Chateau: Discovering the beauty of homegrown produce and gardening
Next Article How to spend a weekend in Périgueux, Dordogne’s charming capital