How to spend a weekend in Périgueux, Dordogne’s charming capital 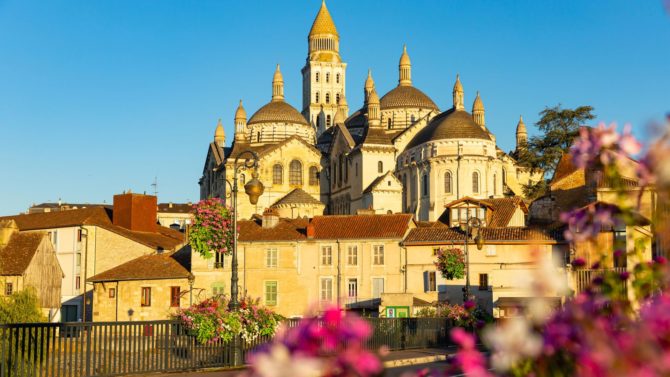 Périgueux, Dordogne’s attractive capital, has a history that goes back more than 2,000 years and can readily be experienced as you make your way across town. To the west, impressive ruins attest to its Gallo-Roman origins, while to the east half-timbered houses and Renaissance mansions mingle with monuments in the vielle ville. There’s plenty to make you pause and linger, whether it’s the ancient arches of a Roman amphitheatre, a charming boutique on a picturesque corner or a chalkboard menu tempting you with the region’s cuisine.

It’s not even 9am and there’s a balminess in the air announcing the start of another hot summer day. Armed with a wide-brimmed hat and a bottle of iced water, I set out for a morning of sight-seeing in the oldest part of Périgueux, Vesunna. The area was settled by the Gallic tribe Petrocorii and became a thriving Roman town in 16 BC with everything from mighty temples and a forum to lavish villas. Though mostly a peaceful residential neighbourhood these days, there are several highlights that should be explored before heading on to the bustling town centre.

My first stop is the Vesunna Musée Gallo-Romain, home to a villa unearthed during an excavation in 1959. The museum’s glass walls not only add allure to the modern building designed by leading architect Jean Nouvel, but they also provide a glimpse at the historic monument inside. After viewing the collection of artefacts, I take a moment to stand before the ruins of the aristocratic dwelling and can’t help but feel small. I can only imagine how awe-inspiring it must have been at the height of its glory back in the first century. Before continuing my trip through Périgueux’s Gallo-Roman past, I stop to admire the neighbouring Tour de Vésone, the imposing vestiges of a circular tower dedicated to the town’s eponymous goddess.
From here, it’s only a five-minute walk north to Jardin des Arènes, once the site of a majestic Roman amphitheatre. Only a few arches and walls remain in this lush green oasis, where I find the perfect spot to enjoy a sandwich on a shady bench.

I continue my tour through Périgueux’s history by crossing Boulevard Michel Montaigne and heading east into the ‘newer’ part of town, Puy-Saint-Front, named after the saint who evangelised Périgord in the 4th century. The area flourished as an independent city during the early Middle Ages, ultimately joining Vesunna in 1240 and becoming the Périgueux we know today.

Saint Front went on to become the first bishop of Périgueux and gave his name to the town’s most renowned monument, its sprawling fived-domed cathedral which dominates Place de la Clautre. A Unesco site since 1998, Cathédrale Saint-Front dates to the 12th century and lies on the pilgrimage route to Santiago de Compostela. With its stunning Baroque altar and Romanesque bell tower it is well worth a visit, yet I am also fascinated by the beauty that surrounds it. No less than 28 historic monuments can be found within a 20-hectare radius around the cathedral. Rue Aubergerie, just a two-minute stroll north, is lined with medieval houses such as the 16th-century Hôtel d’Abzac de la Douze. Another must-see is Tour Mataguerre, a round tower dating to the 15th century and the only remaining structure of the walls that once protected the city.

Walking towards Rue Limogeanne, I notice a slight change, both in architecture and atmosphere. Here, the townscape is characterised by stately Renaissance mansions built with white limestone found in the region’s chalky soils. Starting in the 16th century, wealthy merchants settled on this street, bringing prosperity to Périgueux with their varied wares. Today, it still attracts plenty of curious shoppers, especially those who like to eat well.

Dordogne is synonymous with excellent food and drink, so it makes sense that its capital is nothing short of a wonderland of specialty shops. On Rue Limogeanne I am lured into everything from fromageries to boulangeries and wonder how I can resist buying more than I can ever manage to take back home. La Ferme Périgourdine at number nine is a visual feast, both in ambiance and offerings. Wood-beamed ceilings and thick, arched stone walls add charm to this culinary boutique which specialises in cheese but also carries artisanal jams, crackers, tapenades and other delicacies.

Opposite the shop at number 10 is La Grange du Périgord where you can buy the region’s emblematic duck and geese specialties as well as fine wines and armagnacs. At number 14, Boucherie Chavier is a carnivore’s paradise with rustic sausages and pâtés, hams that look like they came straight from a medieval masterpiece and beautifully marbled côtes de boeuf. I purchase a thick slice of pâté en croûte de canard and head back to my apartment, which happens to be just a few doors down, for a quiet apéro before hitting the town again. I’ve made reservations at Jour de Marché, right around the corner on Rue Eguillerie. It isn’t just history that awaits you at every turn in Périgueux, but also temptation!

Where to stay: Apparts Limogeanne are bright, comfortable apartments in the centre of town, within close proximity to bars and restaurants. From €104 per night.

Where to eat: Jour de Marché is situated on a lively square full of restaurants and directly opposite Maison du Pâtissier, a 15th-century monument with an impressive carved facade. The three-course lunch menu, which usually features regional specialties, is always plentiful and well-prepared. €16.