Le Chat Noir: The story behind France’s most famous cat 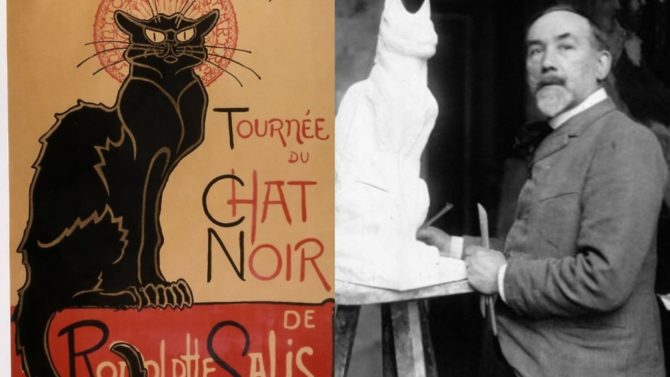 How did a simple black cat become emblematic of Montmartre’s golden age?

Its haughty gaze seems to follow you across the room; no, this isn’t the Mona Lisa, but another glossy-haired subject of a famous work of art that adorns the walls of Parisian-inspired homes worldwide. Today, the classic lithograph of Le Chat Noir is perhaps better known than the venue it once proudly advertised – but it hasn’t always been that way. Le Chat Noir was the world’s first modern cabaret and the toast of Belle Époque Montmartre.

A young artist from small-town Vienne, Rodolphe Salis arrived in Paris in his early twenties. Pioneering a new style of nightclub may have seemed like an unlikely pursuit for someone more used to crafting stations of the cross and other religious paraphernalia, yet Salis’ vision was revolutionary. His idea was to create a venue “where the gentry, burghers and peasants are now invited to drink absinthe after the usual manner of Victor Hugo and Garibaldi”.

From the outlandish, Louis XIII-inspired décor to the gold-bedecked Swiss guard that greeted guests, Le Chat Noir was a club like nothing Paris had seen before when it opened in 1884 on Boulevard Rouchechouart. In a novel format, variety acts would perform for guests seated at tables, with Salis as the jocular compère. It soon became a hotbed for Montmartre’s literary and artistic talents, outgrowing its home and moving to Rue Victor-Massé.

Keeping punters returning meant developing new acts, and the most popular of these was shadow puppetry. Illustrator Georges Auriol and painter Henry Sommier had built a puppet theatre intended for adult performances in 1885, but some experimentation their first shadow plays were born; first with figures made out of cardboard, then with more durable zinc. Over the next ten years, such plays were performed nightly, with complex staging; famous participants included the satiricist Caran d’Ache and painter Adolphe Willette.

It was Willette who introduced his Swiss friend, Théophile Steinlen, to Le Chat Noir, a fortuitous move that led to the creation of the latter’s magnificent poster. Born in Lausanne, Steinlan had been seduced by Montmartre in the late 1880s, allured by its reputation in the art world as the place to be.

Tournée du Chat Noir epitomises his classic Art Nouveau style; what’s more, cats would go on to become a trademark of his work. Finished in 1896, his design features a striking black feline advertising one of Le Chat Noir’s tours (they would take their shadow puppetry abroad). Look out for the red aureola circling the cat’s head, with a twist on the medieval war cry ‘Montjoie! Saint-Denis!’ – in this case it exclaims ‘Montjoie! Montmartre!’.

Sadly, Salis died shortly after his last international tour in 1897 and when his wife took over, production quality declined. Even before his death, the allure of Montmartre’s cabarets had been waning and he’d sold off some assets; his passing was simply the death knell for the Montmartre institution. Other nightclubs in the same name opened up, the most successful of which lasted into the Roaring Twenties. Now all that remains is the famous black feline, a striking reminder of Montmartre’s cabaret heyday.