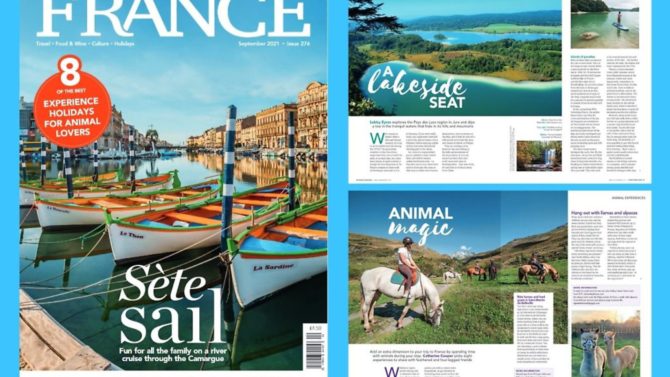 From fascinating James Bond connections to some unusual skiing companions, there’s plenty to savour in our new issue

The fictional seaside resort of Royale-les-Eaux, home to the eponymous casino, is believed to be based on Deauville, Trouville or Cabourg in Normandy, or even Le Touquet or Berck in northern France.

The Ski with Eagles experience lets you get up close and personal with some of Jacques-Olivier Travers 15 birds of prey.

Find out more amazing animal experiences in France with Catherine Cooper on page 52.

The iconic Parisian restaurants are winning a new generation of fans thanks to their simple and well-priced cuisine.

Richard Nahem delves into their unlikely renaissance on page 66.

4) France’s favourite village of 2021 has been crowned

Sancerre, famous for its cheese and wine, is the latest winner of the coveted title, following in the footsteps of Hunspach in Alsace.

For more travel inspiration, see who else made the shortlist on page 26.

6) Banyuls-sur-Mer was once a smuggling hotspot

Today a genteel seaside resort, Banyuls was once a popular destination for smugglers going back and forth between France and Spain.

Take a stroll in this Mediterranean gem with Helen Parkinson on page 32.

Upon tasting the sweet, she’s said to have exclaimed, ‘Di calin soun’ (They’re like hugs!).

Discover the interesting story behind one of Provence’s iconic foods with Sarah Lavigne on page 82.

So what are you waiting for? The September 2021 issue of FRANCE Magazine is on sale from 28 July. Take advantage of our great subscription offers and get FRANCE Magazine delivered straight to your door every month! You can also buy single issues from Mags Direct.

Previous Article Property guide: where are the sunniest places in France?
Next Article Le Chat Noir: The story behind France’s most famous cat