Coast to coast in Charente-Maritime 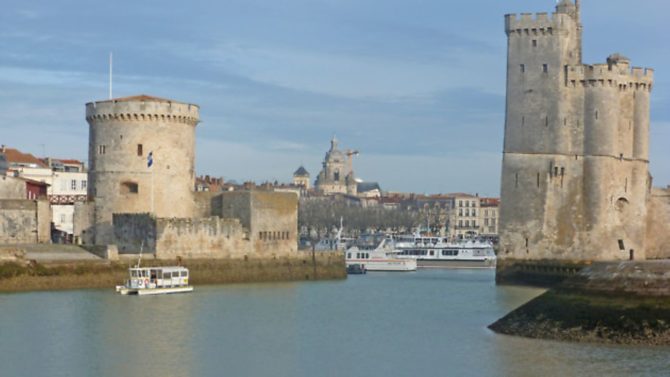 With sun-soaked beaches galore, Charente-Maritime is the place to go to feel the sand between your toes, but there’s plenty more besides, as Solange Hando discovers

Sheltered by a string of islands, between the lower reaches of the Sèvre Niortaise and the Gironde rivers, this luminous gateway to the south claims a fine heritage and some of the best beaches on the Atlantic coast. The French love it – it’s one of their top holiday destinations – so if you like the thought of traditional ambience, this is a good place to go.

Poised like a queen at the mouth of the Gironde, on the ‘Côte de Beauté’, Royan is lined with golden sands where awnings, striped blue and white, seem straight out of the 1880s when Parisians first arrived in their droves. Belle Époque villas pop up here and there but much of the city was rebuilt in the 1950s, following extensive bombing at the end of World War II.

Inspired by the architect Le Corbusier and softened by the Brazilian style that was in vogue at the time, the architecture incorporates gentle curves and splashes of colour which liven up the gleaming white walls. Landmarks include the stylish central market and the so-called ‘concrete cathedral’ which, love it or hate it, can’t fail to impress.

The resort has everything you would expect to find. Beaches large and small, a marina, watersports galore, art galleries, boutiques, restaurants and a seawater spa. Around 50% of the properties here are holiday homes and the 18,000 resident population increases tenfold in season.

Meanwhile along the coast, in the pine forest of La Coubre, La Palmyre is a haven for families, but look out too for Talmont-sur-Gironde or Mornac-sur-Seudre, which are listed among the Plus Beaux Villages de France, and St-Palais-sur-Mer with its quaint villas and relaxed pace of life. The island of Oléron lies just a short distance to the north, linked to the mainland by a 3.2km-long viaduct.

Oléron beautifully combines tradition and tourism. This is the second largest French island (after Corsica) but everything here is on a human scale, from the famous oyster beds tended by hand to the fishing harbour of La Cotinière, where small boats unload the daily catch. There are forests and dunes, vineyards and marshes, as well as hundreds of kilometres of cycling tracks.

Much of the east coast boasts quiet sandy beaches, while the ocean-facing west is for bracing air and spectacular waves. Migrating birds feed on the mudflats, and the scent of mimosa fills the air at festival time.

Climb to the top of the Chassiron lighthouse, located at the extreme west of the island, and you look across to the Île de Ré, where fine sands sweep around the shore and white villages glisten in the sun, draped in hollyhocks, roses and oleander.

It’s as pretty as a postcard, from the glistening harbour of St-Martin to the distinctive church spire of Ars, and then there’s the famous market of La Flotte which is held under the medieval arcades, brimming with island wine, goat’s cheese, oysters and much more.

Two small islands complete the picture: Aix where Napoleon spent his last days on French soil and the idyllic Madame, accessed at low tide on the old ‘Oxen Way’.

Myriad forts and citadels bear witness to a tumultuous past, and both Rochefort and La Rochelle provide something of a history lesson.

Inland from the mouth of the Charente, Rochefort, a city of palms, began life as an arsenal for Louis XIV.

Among the top attractions are the old Corderie Royale and the replica of Hermione, the famous ship that took the Marquis de La Fayette to America during the War of Independence in 1780. The project to recreate the vessel began in 1997 and is now nearing completion, with a commemorative voyage to America planned for this year.

A short drive up the coast, La Rochelle is simply breathtaking. Mirrored in translucent waters, the old harbour is flanked by two iconic towers and the view from the top of the St-Nicolas tower is superb. A stroll along the shaded boulevard and beyond the medieval clock tower reveals elegant limestone buildings reflecting the sunlight, a few half-timbered houses and a stretch of arcades where traditional restaurants and boutiques jostle for space. The aquarium is one of the largest in Europe and the market is a head-spinning feast of local produce, including cognac and pineau wine.

Out in the country, this bucolic ribbon of land is dotted with Romanesque churches, abbeys and châteaux, plus delightful villages and towns such as Saintes which boasts Roman remains and an international music festival. It’s a gentle landscape laced with meadows and woods, marshlands, vineyards and sunflower fields, all of which are ideal for rambling and cycling. For those who prefer sailing, there’s always the option to travel down the Charente in a traditional gabarre.

The property market is buoyant in this part of France, benefiting from capital gains tax measures designed to boost sales although these are due to end in August. Old properties suitable for conversion are rare but there are certainly plenty of other options, from modern apartments to townhouses and villas.

According to Notaires de France figures, Charente-Maritime is the most expensive of the four departments in Poitou-Charentes with an average resale property price of €175,000. Prices in La Rochelle, where the average climbs to €246,000, reflect its enviable facilities and location, especially near the old harbour and in the town centre, where a top-floor three-bedroom apartment in a bourgeois mansion will set you back €424,000.

Rochefort offers reasonable prices, with a three-storey house with six bedrooms and a garden costing €477,000. A three-room apartment on the seafront in Royan is a mere €190,700, while at the other end of the scale there is a villa in St-Palais-sur-Mer on sale at €515,000.

Most properties in Saintes are under €200,000, but you will find a wider choice in Oléron, from a two-bedroom townhouse priced at €95,400, to a three-bedroom detached house with a garden, close to the beach, at €366,000. Small apartments on the Île de Ré can be found for around €100,000, but having said that the island is geared to the luxury market with many properties topping €1m.

There are also several new developments, such as Villa Bretheuil in Royan-Pontaillac or La Flibuste in La Rochelle, where prices start at €220,000. Demeure des Vignes in St Ouen d’Aunis is 10 minutes from La Rochelle, where villas with a garage and garden are on sale from €169,000.

Access to Charente-Maritime couldn’t be more convenient. Flights from UK airports are available with Ryanair, Flybe or easyJet, or you can take the train to La Rochelle. Alternatively you could cross the Channel by ferry and then travel by rail or road to La Rochelle. So, what are you waiting for?