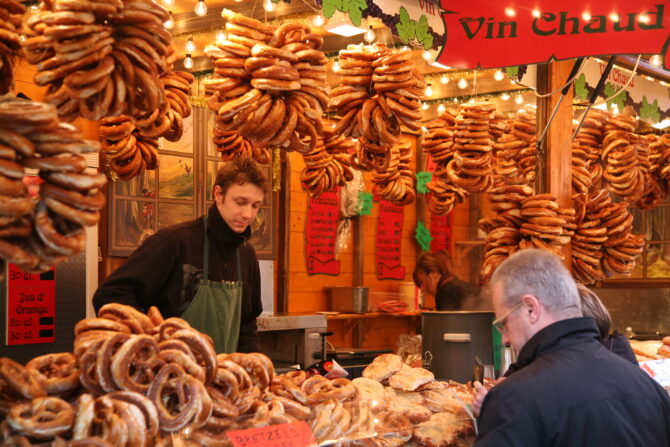 La Ville Rose may not be the first place that comes to mind in a discussion about Christmas markets, but its relative lack of notoriety works in its favour. Situated in the Place du Capitole, it is not as frustratingly overcrowded as some more famous destinations have become. As well as plentiful sausages and foie gras, be sure to try the local favourite aligot, a warming cheesy potato dish, that will leave you queuing up for a second portion.

Held inside the old town walls of the coastal city, this market is credited with being among the most beautiful in the region. Cobbled streets add further charm as you enjoy a range of local specialities such as smoked herring and craquelin pastries. British visitors should feel right at home too, with Christmas pudding also among the treats on offer.

Food at this charming market in the northern city of Arras is influenced by its Flemish roots, so you can expect to see delicacies such as waffles in plentiful supply. Another local favourite are Coeurs d’Arras, pretty, heart-shaped treats made of cheese, perfect for you or the one you love, as you amble through the magnificent Grand’Place.

A difficult choice to select just one in the Alsace region, where almost every town and city can make an argument for prettiest Christmas market, but Colmar is certainly a good option. With six mini-villages of stalls in its pedestrianised town centre it’s a veritable winter wonderland, offering local delights such as berawecka, kugelhopf and bredle cakes, alongside sausages, sauerkraut, bretzels and flammekueche.

Here are three of our favourite Parisian Christmas markets , plus we’ve put together the 2022 French Christmas Gift Guide.