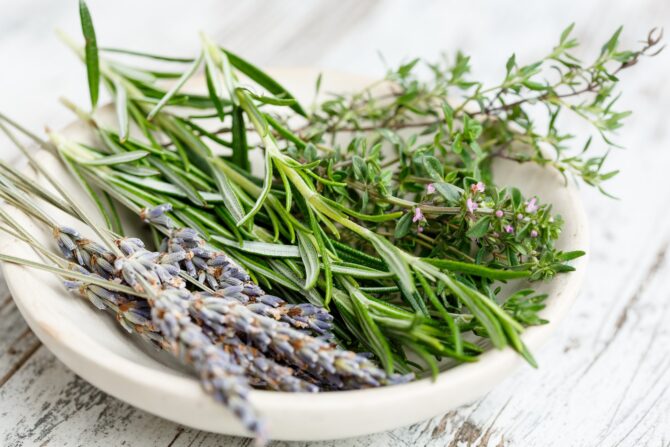 The nights are drawing in and the weather is getting colder; Sue Bradley looks at some great winter herbs and gets her garden ready for winter…

The use of herbs is a hallmark of French cooking, with aromatic leaves transforming meat and fish dishes. Many of these plants are revered for their medicinal qualities too. Yet while parsley, chives, tarragon and chervil are the quartet of ‘fines herbes‘ of haute cuisine, they are seasonal and unlikely to be readily available in the garden over the winter months.

It’s a different story for evergreens such as rosemary and many cultivars of thyme, however, which ensure a steady supply of flavour- packed leaves from January to December and produce flowers that are firm favourites with beneficial insects such as bees and butterflies during the summer months.

Both boast a rich variety of cultivars, offering differing flavour profiles, leaf colours or growing habits. The trailing or creeping rosemary Rosmarinus officinalis ‘Prostratus’ is well suited to pots and less susceptible to wind damage than its taller relatives, while creeping varieties of thyme are great for the spaces between paving stones.

Sage is a commonly grown herb that keeps its leaves all year round. This can be used in cooking, or brewed to make a tea that’s said to have cleansing, antiseptic and digestive benefits. The foliage of this plant can look a bit untidy over the winter months but can still be cut, which in turn encourages fresh leaves in spring.

While many herbs are effectively small shrubs, bay, known botanically as Laurus nobilis, is a tree that many choose to grow as a standard or a pyramid to add an architectural note to the garden. A key ingredient for stews and soups, it’s also a time-honoured treatment for bruises and rheumatism.

Year-round herbs that aren’t so well-known, but definitely worth looking out for, include creeping savoury, known in France as sarriette rampante and botanically as Satureja spicigera. This herb, which is a native of Corsica and has a similar flavour to thyme or marjoram, is commonly used in salami and is said to be a good substitute for salt. It also alleviates bee stings if crushed and applied to the affected area.

In the garden it’s valued for its creeping habit, making it an excellent plant for ground cover, and in summer it produces pretty white flowers. Another herb that’s good all year round is chervil, a bushy annual that’s native to Russia and the Middle East and particularly popular in France. Its aniseed-flavoured, lacy leaves are particularly good paired with fish.

Herbs are undemanding plants that are easy to grow. They do well in a dedicated herb garden or they can be used decoratively in beds and borders.

The key to successfully cultivating evergreen types is to ensure they’re planted in a sunny spot with good drainage. Most will survive an average British or French winter if their roots don’t sit in water-logged ground. Generally, herbs are readily available as small plants, but it’s a relatively straightforward process to take cuttings from the evergreen types in order to increase stocks.