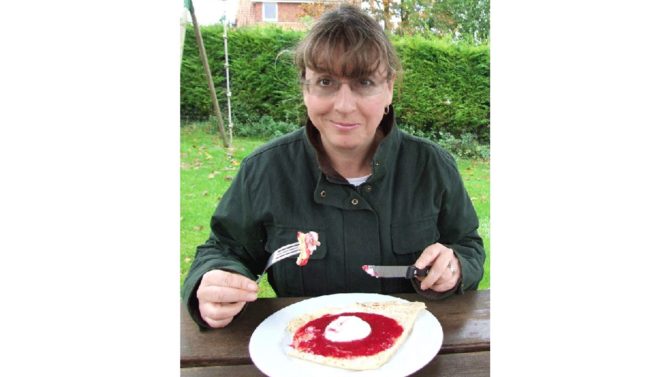 Whether you celebrate Pancake Day in the UK or the Fête de la Chandeleur in France, one thing is for sure, everyone loves a pancake or a crêpe!

In February in our little village in northern France, you can be sure of two things – it will rain and we will be eating pancakes!

In north America on 2 February, the point of mid-winter, they celebrate Groundhog Day. If you’ve ever seen the film you’ll know it’s the date on which a groundhog named Punxsutawney Phil emerges from his cosy hidey-hole to predict the weather. According to legend, there’s only ever been one Phil – since 1886.

We have our own ‘Phil’ here in our village, although he’s not quite as old or furry, and he’s called Jean-Claude. We also celebrate that day, but this being France, food is involved.

Here it’s called the Fête de la Chandeleur (Candlemas in the English language) and along with the whole of France, we feast on crêpes, a thin pancake. La Chandeleur is a religious date and has ancient roots. No one really knows why the French eat pancakes but some claim that 5th-century Pope Gelasius I, who helped establish the tradition of Chandeleur, used to offer crêpes to pilgrims who visited his church.

Jean-Claude emerges from his cosy little cottage on 2 February to predict the weather, though he is usually so far from right that most of us just assume it will be the opposite of what he says.

“Oh là là, it’s raining,” he says. Apparently this means it will rain for the next 40 days.

“Oh là là, it’s overcast and cold; winter will be here for another 40 days,” he assures us. However, if it is a sunny day “winter will return” but this time bringing misfortune with it.

The French are a superstitious bunch but luckily, there are ways to ward off bad luck… A few Chandeleurs ago we were invited to the home of Jean-Claude to enjoy his wife Bernadette’s famous crêpes – she flavours them with a soupçon of beer.

“Merde, it’s been sunny today, bad luck is on the way,” proclaimed Jean-Claude, “but if we flip a pancake up the armoire and it sticks, we’ll have good luck.”

“Not in my house,” said Bernadette but it was too late, Jean-Claude had already tossed a pancake onto the door of the armoire where it clung for a few seconds before sliding to the floor.

“Now look what you’ve done, we’re in for some bad luck. You can just get a cloth and clean that up,” said Bernadette glaring at her husband.

Strangely, she had said nothing at all when he had placed the first pancake she had made on top of the armoire after flipping it with his right hand while holding a coin in his left hand. Then she had said, “bon, bon, that will bring good luck to us all”.

Quite where all these traditions come from Jean-Claude cannot say, but in our house, on 2 February, we pop a pancake on top of a dresser for a day – just in case!

Janine Marsh lives in France with her husband and 72 animals. Her latest book, My Four Seasons in France: A Year of the Good Life, is out now

Check out this delicious pancake recipe from Le Deli Robuchon