Chalet renovation in the Alps 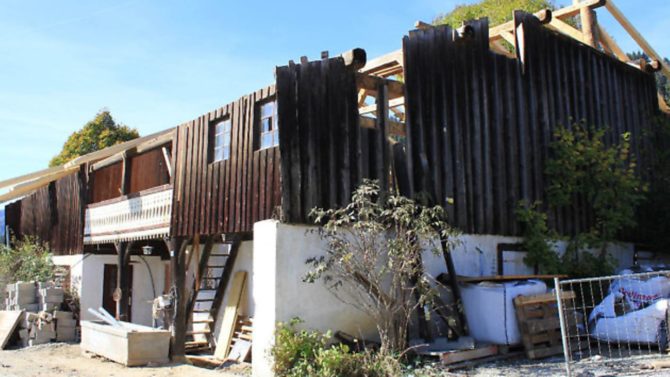 After 22 months of hard work, this farmhouse has been transformed from a dilapidated pile into one of the most chic chalets on the slopes

The best things come to those who wait, then wait, then wait some more. In February 2012, when Matthew and Vicky last shared their renovation story with FPN, they were just beginning to realise their very own French dream. Having successfully purchased a dilapidated 19th-century farmhouse in the Alps, they were beginning an exciting and extensive renovation project.

As they had already completed several impressive property renovations in the UK they were confident this would be familiar territory. But when I met up with them again this month, I found their reality more complicated than they could ever have imagined. Vicky tells us about the end of their renovation journey and shares some of her newfound French wisdom.

When you started the renovation you hoped to have it completed by December 2012. Did you meet your deadline?

Actually the original completion date for the project was summer 2012. We had given ourselves a six-month contingency for any unexpected delays so felt confident arranging to spend Christmas 2012 in the farmhouse with the family. We didn’t. We spent it in the UK and only moved in in December 2013!

What was the reason for the delay?

I think the short answer is, make sure you work with the right people. For us, we didn’t appreciate the importance of finding the right architect and the significance that this decision would play in the project.

Our architect was based in a different town and didn’t understand the intricacies of the local bylaws, so our application to modify our planning permission was rejected three times largely due to her not understanding the specific requirements surrounding local parking requirements.

We also encountered problems when we tried to change electrician mid-project. It became apparent quite quickly that the original electrician (recommended by the French building firm) did not have the experience or desire to realise our lighting ambitions. I was never going to be a ‘one plug socket, one ceiling light’ kind of client, which was not the way he was used to working.

We also wanted to use LED lighting in the house to do our small bit for the environment,  but unfortunately he had no experience working with LEDs.

Where did you find support and help during the more challenging times?

We had two sources of support and both were invaluable. Our estate agent, France Property Angels, helped us get connected to the EDF electricity board, and helped navigate the complexities of the French system of applying for and receiving temporary electrical connections while applying separately for the permanent connection to be approved and installed.

They were also on hand to help us through the difficulties with the original electrician and as a go-to person when we just needed to ask someone, “is this really how things work in France?”

An example of this was the lengthy battle I had with the architect about the direction windows and doors should open.In France they open inwards, in the UK outwards. I wanted them all to open out. The architect repeatedly ignored my amendments to her plans. Eventually I asked the immobilier who explained to me the French way. Finally I could talk to the architect about a concept she really was completely unfamiliar with. The result: our doors now open outwards.

Our other guardian angel was the British project manager who lived in the area and who we eventually hired. Without him we probably still wouldn’t have moved in to the house. In fact he was still battling to get heating and electricity switched on two days before we arrived.

How did your budget fare on this project?

Our building costs were 30% higher than we had estimated as the cost of materials in France is relatively high. We hadn’t really budgeted for any external landscaping which of course needs to be done; plus, concrete is used a lot in France and is incredibly expensive. It all slowly adds up but we were realising a dream, and we have the home that we wished for.

Now you have created your home, would you ever do it again?

We have created our absolute dream home here in France and I can’t imagine wanting to live anywhere else, so for that reason we probably won’t do it again for ourselves, but… I have a friend who has just started looking to buy in the Alps and I have whole-heartedly encouraged her to do so. I want to be on hand to share all my newfound wisdom so yes, I will probably end up doing it again, but next time it will be for other people!

What advice would you give to anyone who is about to tackle a similar project?

• Hire a project manager you know and trust. You might feel like they are an extra cost at the beginning, but they will save you time and money, and they will get things done. But give them a heads up – my British project manager was often referred to as my ‘spy’ by the French workers. Thank goodness he had thick skin!

• Shop around for the best deals on both sides of the Channel. Some materials, furnishings or tools may be more expensive in France. To give you an example, we found it was cheaper to buy French oak flooring that had been exported to Ireland, and have it imported back to France than to buy French oak in France!

• Hire contractors with multiple references and recommendations and check these references, call them up, go around, be sure of what you are committing to. It is sometimes hard to extract yourself from these commitments and these are the people who are going to realise your dream.

• Be precise in your instructions to your contractors. Draw scaled plans, have visual examples of what you want to create, be specific to a fault and be prepared to keep checking back in. It’s worth the fight because not only will you get what you want, but I found that all the contractors involved were so proud of the end result that it was worth every battle, for all of us.

• Ladies, as much as it pains me to say this, the contractors often paid more attention to my husband’s instructions than my own. Make of that what you will.