Did you know these celebrities can speak French? 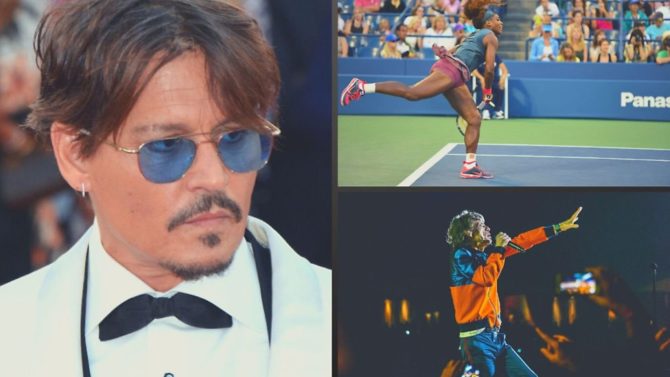 The tennis superstar, who owns an apartment off the Champs de Mars in Paris, has been learning French since her teenage years but has lacked the confidence to speak it publicly. “It’s way, way more nerve-racking than playing tennis,” she remarked. But the three-time French Open winner, who also speaks Italian, has been trying out her French in post-match interviews and TV shows, and is keen to pass on the language to her toddler, Olympia.

Charlie and the Chocolate Factory actor Highmore has been impressing interviewers with his French ever since he was a child. He learned French at school and has worked under French directors Jean-Jacques Annaud and Luc Besson. The multilingual marvel studied Spanish and Arabic at Cambridge University, gaining a double first.

If you haven’t been privy to Cooper speaking French yet, you’re in for a treat. The Hollywood actor speaks the language well, having studied in Aix-en-Provence for six months, and is a keen Francophile. He even manages to crack some jokes en français in his interviews – an achievement indeed.

Celebrated football manager Mourinho, currently at the helm of Tottenham Hotspur, speaks not only French but Spanish, Catalan, Italian, English and, of course, his native Portuguese. He’s yet to manage a French club, but with his impressive French skills there’s nothing stopping him.

The screen veteran’s third wife, Tarita Teriipaia, with whom he starred in Mutiny on the Bounty in 1962, was French and as a consequence he learned the language to an expert level. Another reason why French is the language of love!

The Rolling Stones’ lead singer spent many holidays in France with his family as a child, inspiring his love of la belle langue. Nowadays, Jagger owns Château de Fourchette in the Loire Valley town of Pocé-sur-Cisse.

Fans of Netflix’s popular Sex Education, in which Mackey plays fiesty British high schooler Maeve, may be surprised to learn that the actress was born in Le Mans to a French father and English mother, and speaks French fluently. She lived and studied in France until she was 18, then earned her degree in English from Leeds University in the UK.

Foppish film star Grant is the son of a French teacher, who certainly seems to have taught him well; he conducts overseas TV interviews and press junkets like a pro. In 2006, he even received an Honorary César for his acting career

The German-American model-turned-actress speaks excellent French and was once married to leading French actor Guillaume Canet, whom she met after filming Joyeux Noël.

Depp, descended from a French Hueguenot immigrant, met his French actress former wife Vanessa Paradis in 1998 after filming The Ninth Gate in France. It is said he enjoyed the simple life and anonymity that living in France afforded him. He bought the Provencal hameau (small village) Le Plan-de-la-Tour in 2001, but it was listed for sale in 2015 – has his French love affair come to an end? His actress daughter Lily-Rose Depp also speaks French fluently.

Another Francophone Netflix star is Mindhunter’s very own Special Agent Tench, American actor Holt McCallany. After high school, he moved to Paris, where he studied French at the Sorbonne, art at the Paris American Academy, then theatre at the renowned physical theatre schools of Jacques Lecoq and Marcel Marceau.

11 popular French TV shows you should watch next

Previous Article Retire to France! How to lead an active later life across the Channel
Next Article 5 tempting crêperies to visit on your next trip to Paris