Carol Drinkwater: A tribute to the French baguette 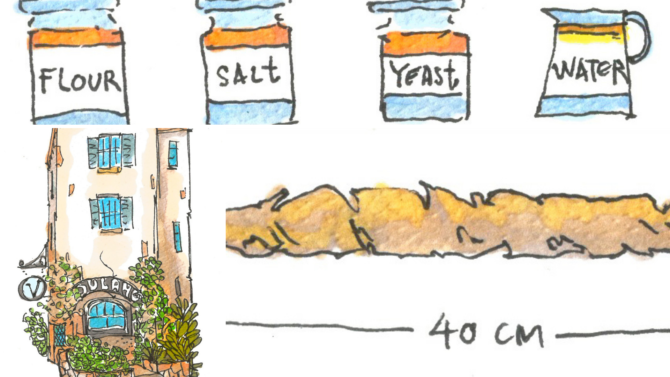 In France, artisans, craftspeople, are figures of high regard. Their trades can be anything from silversmith, carpenter, ironmongery, soap making to baking bread or producing butter. I have met some astonishing figures over the years who take their trade to new heights or who use their skills to make a difference in one way or other.
Jean-Paul Veziano is such a individual. He is a third-generation baker working in a humble but very busy bakery, nestled behind the Roman ramparts in the bustling seaport town of Antibes, a few kilometres east of our Olive Farm. I first came across him a decade or so ago when I was travelling for my The Olive Route films and books. As so often happens, due to our busy schedules, we had not stayed in touch. So, I was delighted when I received a call inviting me to visit his bakery to learn the secrets of baking a fine baguette.

According to France’s Observatoire du Pain – believe it or not France has a scientific Bread Observatory – the French consume 10 billion baguettes every year. That breaks down to 320 baguettes consumed every second on the French mainland. Mindboggling.
So important to this nation is the baguette that its sale is strictly controlled. The rules include: a baguette can only be sold on the premises where it has been baked; the price is government fixed; it contains only four ingredients: flour, water, salt and yeast. Its minimum weight must be 80 grams and maximum length 40 centimetres.
In 2018, after it was announced that Unesco had awarded the status of Intangible Cultural Heritage to the Neapolitan pizza, President Emmanuel Macron put his best foot forward, arguing that if a pizza deserves Unesco recognition, so too does our humble stick of bread, a very recognisable symbol of French daily life.
Bakers to the fore. Heads together. The baguette’s unique qualities have been drawn up by the ministry of culture and submitted to Unesco in Paris. France now awaits Unesco’s decision as to whether this precious loaf will gain its rightful place in the pantheon of food heritage icons. The decision will be announced in late 2022.

As Jean-Paul Veziano and I watered and kneaded the finest of fine flours, then waited for the dough to rise, we discussed the matter.  ‘Are you excited?’ I asked him. He nodded, but in all honesty he didn’t seem as excited by the outcome as I am. I reminded him of when we first met. I was filming in the Middle East, searching for stories that focused on peace, on gestures through community or storytelling that might add a little light to the darkness that is the Israeli-Palestinian conflict. Jean-Paul, who is a Catholic, had made contact with a Jewish baker and a Muslim one. Together, this trinity of bakers baked bread. Make bread, not war, is Jean-Paul’s motto.
The three men, united by their desire to make even a small gesture to help untangle the conflict, took a flight to Tel Aviv. From there they travelled around the Middle East handing out loaves, spreading their message. ‘Eat together, cook together, search for what you have in common.’
I asked him now whether he felt his time and energy had made a difference? He shrugged and lowered his head.  ‘Food can unite us. All over the world,’ he said, ‘people are picking up on the message. You’re an Irish Catholic, Carol, n’est-ce pas?’ I nodded.  ‘Moi aussi, I am Catholic. I want to bake bread in northern Ireland with a Protestant baker. Did you know that the word baguette translates as wand?’ he grinned. ‘Our magic wand is waving the flag of peace.’

Previous Article How were madeleines first created?
Next Article Learning French: 4 useful websites for learning a language while having fun