How were madeleines first created? 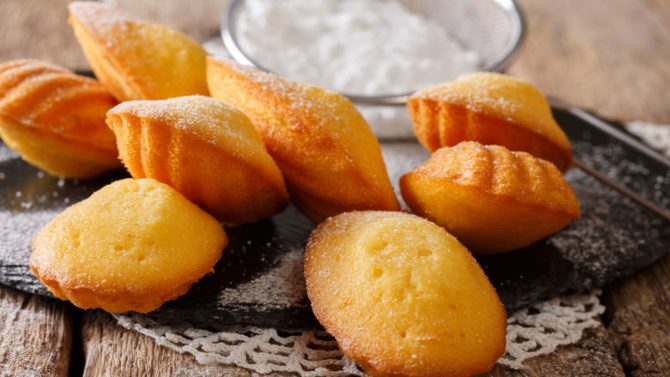 An exquisite pleasure had invaded my senses.” This the reaction in Proust’s Swann’s Way to the taste of madeleine crumbs in his cup of tea. He embarks on a reverie and remembers the happy times he had as a child when he would eat the cakes at his aunt’s house.

A bite of the small buttery shell-shaped cakes may not always inspire quite such a strong reaction, but the simple sponges that are so easy to carry as a snack on a day trip or pass round in the office of an afternoon, are sure to be similarly sprinkled through many happy memories of French people and Francophiles, as they are such a staple of French confectionary. Because of this famous passage madeleine de Proust has become a phrase in France to talk about smells, tastes and sounds that remind us of childhood.

Fit for a Duke

It is widely accepted that cakes come from Lorraine, now part of Grand-Est in the north east of France. While we can’t be certain how they truly first took form, one popular story is that the cake is named after a servant who worked for the Duke of Lorraine, Stanisław Leszczyński, who lived in town of Commercy in the 18th century.

It is said that while the duke was entertaining guests with a meal, an argument in the kitchen caused the pastry chef to walk out. As the staff knew the duke could not allow his visitors to go without dessert, young Madeleine stepped up and offered her family recipe which they hurriedly made. Enamoured with the melt-in-the-mouth cakes, the duke then made a point of finding out who made them and insisted the cakes were named after her.

What is certain is that there has been a long tradition of making the iconic gâteaux in the town. In 1874 a decree was passed allowing madeleines to be sold on the platforms at the Gare de Commercy, a stop on the Paris to Strasbourg railway line. For decades, women carrying large baskets of the sponges would loudly proffer them to passengers passing though the train station.

You still can expect to find delicious freshly made madeleines on a visit to Commercy. La Boîte à Madeleines is a mini factory, café and shop where the goodies are produced before your eyes. But today there’s no need to travel to get your fix as they are easily found in every supermarket in France and many in the UK. Or if you want to avoid the mass produced pre-packed versions there are also a host of artisanal specialists to order from.

To answer why the madeleine is shaped as it is, we look to another of its legends of origin – that the cakes were actually first made for pilgrims to the Santiago de Compostela. they were in the shape of a scallop shell as this is a well-known symbol that can be seen on markers along the route and is sometime worn by those making the trip in the footsteps of Saint James.

If you want to bake the sweet treats yourself you will need a madeleine tin, which traditionally makes a dozen cakes, to get the scalloped shape, as well as flour, eggs, sugar and butter and often either vanilla, lemon or orange to flavour.

Once you get the basic recipe down pat, there is a whole world of innovative varieties just waiting to be tried. From chocolate dipped to lavender, pistachio to gingerbread the world is your scallop.